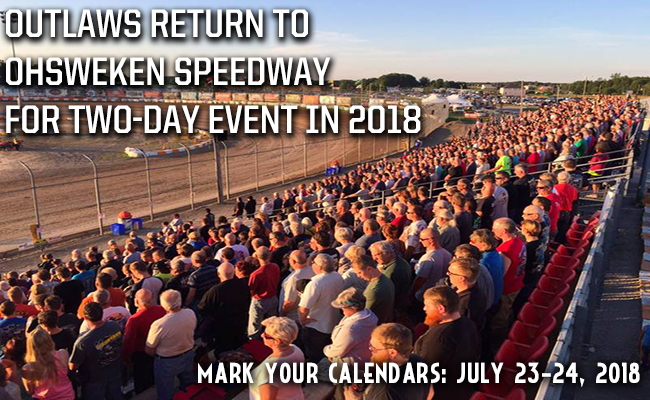 CONCORD, N.C. — Sept. 27, 2017 — The World of Outlaws Craftsman® Sprint Car Series returns to Canada’s Ohsweken Speedway for a two-day event in 2018. Burger Barn presents the Northern Summer Nationals is scheduled for Monday, July 23, 2018 and the Arrow Express presents the Six Nations Showdown will cap off the two-day event on Tuesday, July 24, 2018.

Located in the village of Ohsweken, Ontario, Canada, Ohsweken Speedway is a high-banked, 3/8-mile oval. The Outlaws history at the Oshweken Speedway dates back 10 years when the Series made their first appearance at the dirt oval in 2007. After Mother Nature washed out the both days of the event in 2008, the Series returned north of the border in 2009 and 2010 for a two-day event before reverting back to a single-day show starting in 2011 through 2017.

In 2018 the World of Outlaws will once again return to Ohsweken Speedway for a special two-day Six Nations Showdown on Monday and Tuesday, July 23 and 24, 2018.

Tickets for the two-day event at Ohsweken Speedway will go on sale, Monday, Sept. 25th. Six Nations Showdown tickets can be purchased by visiting OhswekenSpeedway.ca or by calling (519) 717-0023.

Stay up-to-date with the World of Outlaws Craftsman Sprint Car Series through the Series Website and on social media at facebook.com/WorldofOutlaws and @WorldofOutlaws on Twitter.