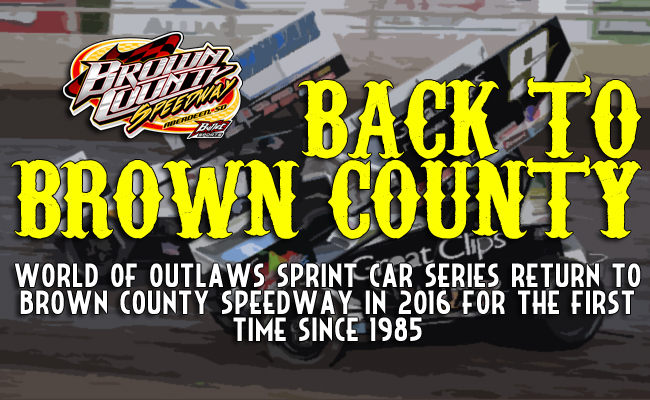 In the series first and only race to-date at the high-banked third-mile bullring back in 1985, three-time series champion Sammy Swindell was victorious over fellow Hall of Famer, 20-time series titlist, Steve Kinser. The World of Outlaws Late Model Series competed at Brown County Speedway in 2008 as part of their “Wild West Tour.”

The 2015 campaign was a historic one for the World of Outlaws Sprint Car Series as North Dakota native Donny Schatz won his seventh championship. In the process, Schatz, who drives for Tony Stewart Racing, became just the second driver to win 30-plus A-Feature events in the season, winning 31 times, to join Kinser, who accomplished the feat three separate times in his legendary career.

Schatz also surpassed the 200-win plateau for his career in 2015, joining Kinser and Swindell as the only three drivers in series history to achieve that mark. Schatz won twice in South Dakota last season, at Dakota State Fair Speedway in Huron and at Badlands Motor Speedway (formerly Huset’s Speedway), just outside of Sioux Falls in Brandon.

A total of 22 drivers won A-Feature events with the World of Outlaws Sprint Car Series in 2015, including six drivers that will be competing full-time with the series in 2016. Shane Stewart, who finished second in points, won nine A-Feature events for the Larson Marks Racing team, which is co-owned by NASCAR driver Kyle Larson. Brad Sweet, who drives for Kasey Kahne Racing, won five times, while his teammate, 2013 series champion Daryn Pittman, also picked up five victories. Joey Saldana won a trio of races as did fellow veteran Paul McMahan.

Information on tickets for the World of Outlaws Sprint Car Series return to Brown County Speedway in Aberdeen, South Dakota on Sunday, June 19 will be available soon at www.slspromotions.com.