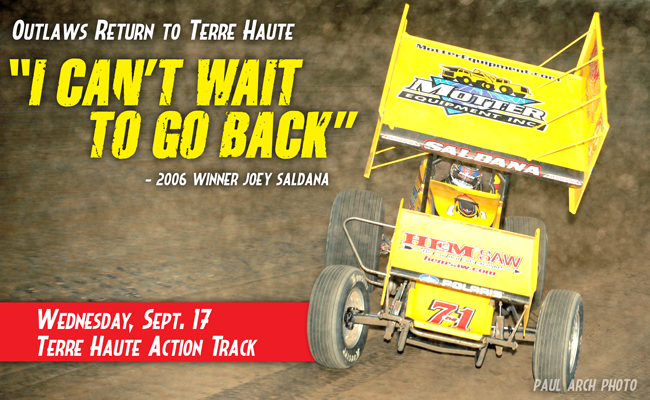 TERRE HAUTE, Ind. – Sept. 12, 2014 – None of the top four drivers in the World of Outlaws STP Sprint Car Series championship standings have earned a victory at the Terre Haute Action Track, but there’s no doubt Donny Schatz, Daryn Pittman, Paul McMahan and Kerry Madsen will be trying to add their name to the track’s record book on Wednesday, Sept. 17.

On top of that, Indiana native Steve Kinser, who won four times in a row at the Indiana half-mile oval in 1993 and ’94, will be taking aim at one more Terre Haute victory in his final season on the road with the World of Outlaws STP Sprint Cars.

Joey Saldana is the last Outlaw winner at Terre Haute, taking the victory on June 4, 2006, and as an Indiana native he can’t wait for the series to finally roll its way back there.

“I can’t wait,” said Saldana, who has five victories and a series-high 22 quick-times this season. “I remember going there quite a bit when I was little because you had to unload in the infield. Growing up, I lived in the Terre Haute infield. It’s a great facility. We haven’t been there in a long time so hopefully it’s a sellout. It’s time to go back. The last time we were there was 2006, I can’t wait to go back.”

The event at Terre Haute caps off a rare late-season Indiana mid-week doubleheader with the series competing the night before at quarter-mile Kokomo Speedway. The Outlaws then exit Terre Haute for Eldora Speedway on Friday, Sept. 19, in Rossburg, Ohio.

DIRTcar UMP Modifieds will join the Outlaws on Sept. 17 at Terre Haute. For tickets and more information about the Terre Haute event, click www.WorldofOutlaws.com or call the ticket hotline at 877-395-8606.

Previous feature winners at the Terre Haute Action Track include: