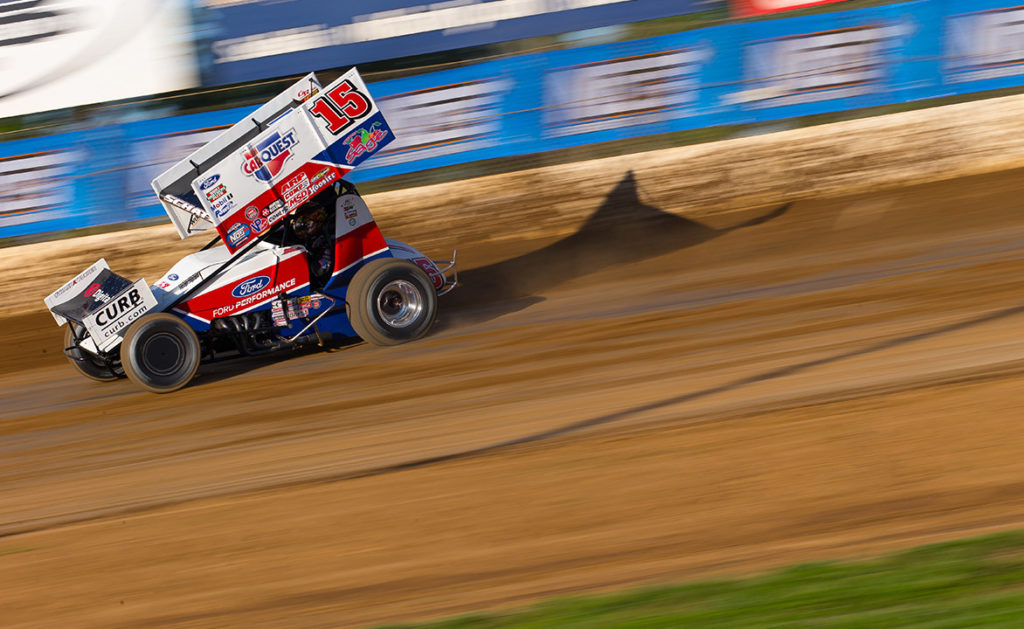 “You look at trophies. You look at some things that have happened in the past and you think ‘How did I get here?’” Schatz said. “It’s crazy to think how I got to this point.”

He has two wins, so far, this season with Tony Stewart/Curb-Agajanian Racing – winning the season opening race at Volusia Speedway Park and at Lake Ozark Speedway in May. With those victories, he currently sits at 296 career wins. Reaching 300 this year, while not guaranteed, is highly likely as Schatz hasn’t won less than eight races in a single season since 2011.

Milestone numbers were never a goal for Schatz when he first started. He approached them in stride, he said. First, he wanted to win one race. Then a second. Then a third. Once the wins came on a regular basis, he looked to have the most wins, the most top-fives and the most championships. However, it’s not the numbers that have kept him going. It’s the competition.

“You know how hard it is to stay on top,” Schatz said. “That’s a challenge amongst yourself. You know you can do it, but it changes every day. A lot of guys that are trying to do it have nothing to lose. That’s what makes the level of competition in this sport what it is. That’s what makes me want to keep doing it is it’s always challenging, and the target is always moving. So, you hope when it’s all said and done that you’re the bullseye that keeps moving along with it.”

To Schatz, they’re all just numbers. He’s focused on winning however many races he can. What that number is at the end of the day doesn’t matter.

“I never met anybody that said, ‘Man, I hope when I retire I’ve won 600 career [Features],’ because there’s not many people in this that I don’t know would be arrogant enough to say something like that and actually believe they could do it,” Schatz said. “It’s just one day at a time. Take what’s in front of you. Make the best of it. Hopefully you have some success along the way and self-satisfaction.”

Before joining three-time NASCAR Cup Series champion Tony Stewart’s World of Outlaws team in 2008, Schatz drove for his own team, based out of North Dakota. It was fun. It was tough. And it was necessary to get him to where he is now.

“There’s no way I would’ve been able to get to this part of the sport without having my own team,” Schatz said. “You know, because I wasn’t good enough to drive for car owners and those sorts of things and my family always supported me. But it got to a point where I had the opportunity to go drive for Tony Stewart and it allowed my family to focus on their business and the family and the racing was what we all loved to do.

“But it was someone else’s financial problem and management problem. Tony is the perfect person for that. He has a great race team and a great business setup there (in Indiana) and a great background and great location. A lot of things would have had to change for me to continue on with my own team. We just couldn’t make it work. So, we’re able to race the same way and as competitively and as professionally as we felt we could with our own team. And even more. And it’s allowed us to enjoy life a lot more.”

Schatz caught Stewart’s attention when he won his first of 10 Knoxville Nationals victories in 2006. The composure Schatz showed in winning the prestigious Sprint Car event was what Stewart said made him first begin to consider hiring Schatz.

“After that, I had an opportunity to talk to Donny a little bit and I wanted to get to know him better,” Stewart said. “I asked him if he might be interested in making a change to possibly come drive for TSR. He cracked the door open just a little bit and I worked to shove the door open the rest of the way as quick as I could. We worked to convince him that TSR would be a good home for him. We had both a winning USAC program and a World of Outlaws program and I was confident that we could give him a good opportunity to continue to accomplish his goals as part of our organization.”

Schatz won 19 races and his third Series title in his first year with TSR. In total, he’s won more than 200 races and eight championships with the team – along with bringing TSR its 300th career World of Outlaws win at Eldora Speedway in July.

He was on a streak of five champions in a row, from 2014 to 2018, before reigning champion Brad Sweet denied him of the 2019 title by four points. Schatz admits last year was an off year for himself and that he had to overcome mental blocks – due to dealing with his father’s cancer diagnoses. But with his father healthy and the mental blocks gone, Schatz said he believes he and his TSR team can get back to winning 20 or more races a year.

“Last year, there were a lot of hurdles along the road,” he said. “My guys overcame it diligently. I was the weak link. And I’m not the weak link right now. I’ve got past a lot of things I needed to get past. Life throws you curve balls sometimes. Sometimes it throws you lemons and I figured out how to make lemon vodka with it. You just have to adapt to changes. There was a time period where I couldn’t.

“Looking back on it now, for us to even have a chance at the championship and to lose it by four points with a lot of the performances that I had last year is actually incredible. It’s actually one of the years that stands out the most. We were building from the ground up. I wasn’t there. And to miss out on a season by four points and Brad having a career year with his best season, it says a lot in itself that it was not a bad year at all. It was really, you know, one of the best years without the performance we’ve had.”

No matter how 2020 turns out for him or how many wins he earns, it’s not going to slow down his drive or passion for Sprint Car racing.

“This sport owes me nothing,” Schatz said. “I feel like I’ve contributed to it for a long time. I’ve won the things I’ve wanted to win, and I want to continue to win as much as I can.”

If you can’t make it to the track, you can watch every race live on DIRTVision.