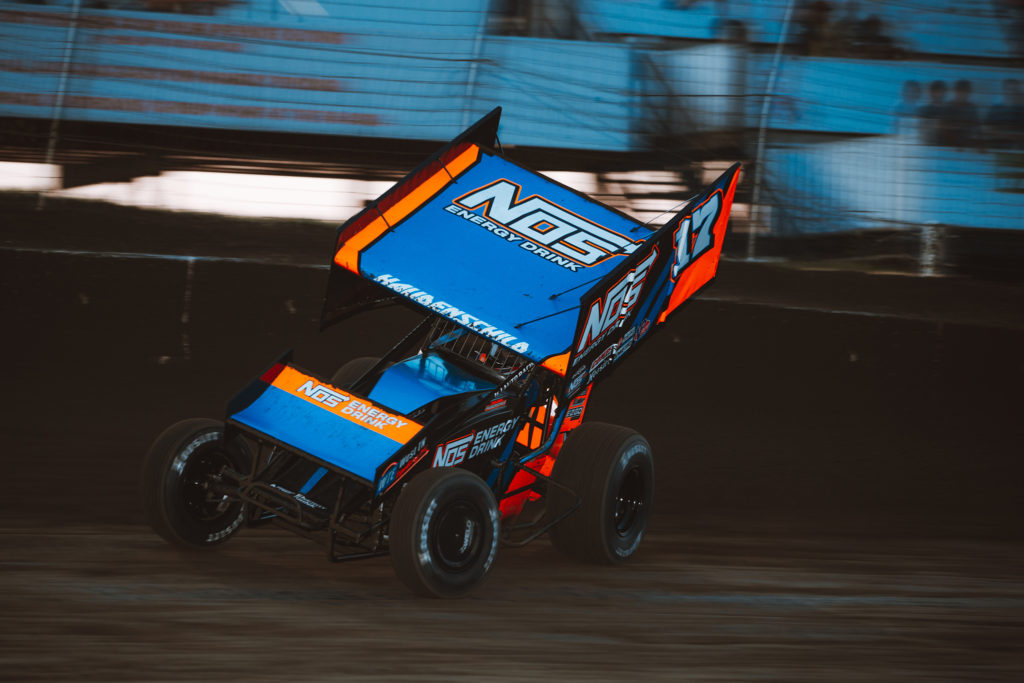 A busy month of August for the World of Outlaws NOS Energy Drink Sprint Car Series will be capped by a swing through the heart of America.

On Friday, August 27, the state of Nebraska welcomes The Greatest Show on Dirt for the first and only time in 2021. The FVP Platinum Battery Showdown takes the Outlaws to Greenwood’s I-80 Speedway, a high-speed 4/10-mile oval nestled in between Lincoln and Omaha.

A near eight-hour haul to Rapid City, SD calls for a day of travel on Saturday, but the intensity resumes on Sunday, August 29 at Black Hills Speedway. The western South Dakota venue hosts the Rushmore Outlaw Showdown, which marks the final stop before the Outlaws’ West Coast swing begins.

As the 10th and 11th races in the month of August, I-80 and Black Hills follow a swing through the Dakota’s on August 20-22 at River Cities Speedway, Red River Valley Speedway, and Huset’s Speedway. Of course, that all follows the 60th running of the NOS Energy Drink Knoxville Nationals pres. by Casey’s on August 11-14, which features a potential $200,000 winners share. The busy slate kicks off next week with the Ironman 55 testing the might of racers at Federated Auto Parts Raceway at I-55.

The second-most visited track in Nebraska (behind Eagle Raceway), I-80’s race will mark the 35th appearance in Series history. The Outlaws first visited Greenwood in 1995 and made annual trips for nearly a decade.

Indiana’s Mark Kinser was the undisputed king of I-80, topping 10 races including a historic five-straight Features in 1996-97. Other legends with I-80 victories include Danny Lasoski (5), Sammy Swindell (4), Steve Kinser (3), Jac Haudenschild (2), Stevie Smith (2), and Joey Saldana (2).

Reigning World of Outlaws champion and current points leader, Brad Sweet, will enter as the only active driver with a NOS Energy Drink Feature win at I-80. The Series ended a four-year absence from the track last August and it was The Big Cat finding victory lane aboard the Kasey Kahne Racing, NAPA Auto Parts #49.

“It’s easy to lose a little focus following the Month of Money, but we know we’ve got to stay committed to the championship,” Sweet said. “A lot of good tracks for us in that swing leading to the West Coast and our #1 goal is to win races, so hopefully we can keep racking some up during that period.”

Black Hills brings the Outlaws back for the 17th time in Series history when the 900+ horsepower machines rumble through town on August 29. The 1/2-mile venue has a relationship that goes all the way back to 1983 when Steve Kinser won a Fourth of July special, and it ranges all the way through the 1990s, 2000s, 2010s, and now 2020s.

Donny Schatz of Fargo, ND has collected three victories (tied with Kinser for most) at the Rapid City, SD track, all coming consecutively in 2006, 2007, and 2011. With another month left, the 10-time champion and 300-time winner currently sits fourth in the title hunt aboard his Tony Stewart/Curb-Agajanian Racing, Ford Performance, Carquest #15.

When it comes to the most recent run, Carson Macedo was the man standing in victory lane. A rookie back then in 2019, the Lemoore, CA native led the final 16 laps at Black Hills and earned a $20,000 payday for his Kyle Larson Racing team.

Fast forward two years and Macedo is arguably the hottest commodity on tour. It’s only his third full season as an Outlaw and he’s risen to second in the championship with a career-best seven victories since joining forces with the Jason Johnson Racing #41. He’ll try to chalk up another W next month and join Steve Kinser and Donny Schatz as the only back-to-back Black Hills winners.

“Honestly, it’s pretty surreal to stop and actually analyze all of the success we’ve had this year,” Macedo noted. “I knew coming into this team that we had the potential to excel, especially with Philip [Dietz] on the wrenches. But to have seven wins at halfway and in contention to win the title is pretty cool. We just have to keep our head down and keep clicking off these strong runs and the wins will follow.”

Following I-80 and Black Hills, the World of Outlaws NOS Energy Drink Sprint Car Series will return to the West Coast for the first time since 2019. The COVID-19 pandemic kept The Greatest Show on Dirt away throughout 2020 and the spring of 2021.