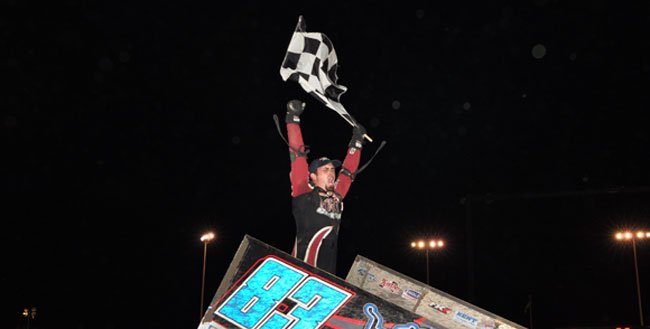 TULARE, Calif. — March 16, 2012 — Tim Kaeding might as well have his mail addressed to Thunderbowl Raceway.

The Californian showcased why the high-banked, one-third mile race track is his house with a dominant performance on Friday in the first of the World of Outlaws doubleheader.

“This is my home away from home,” he said. “We’ve definitely done a lot of things at this track that nobody else can say.”

Not only did Kaeding win, but he did it in style. After starting fourth, Kaeding climbed to second by lap five. One lap later, he rocketed past Steve Kinser off turn four to take the lead at the flag stand in front of the rowdy cheers of a packed crowd.

“This is one of those tracks where you have to have a little bit of patience and big you know whats downstairs,” Kaeding said. “It kind of fits my driving style. The harder you run around this place the better you get around here. I kept doing what I do – live or die by the high side. We definitely lived it up tonight.”

On that circuit the duo entered lapped traffic and Kaeding damaged his nose wing after contact with Bill Rose. Kaeding’s wing collapsed on the left side, but he continued to pull away from Kinser, who later sustained his own collision with lapped traffic.

While running second on lap 11, Kinser spun in turn two and fell back to 12th. Jason Sides capitalized and began the chase on Kaeding. Sides stayed within striking distance and restarted on the inside of Kaeding six times between Kinser’s spin and lap 26, which was a fiasco.

After Jason Meyers flipped on lap 13, the drivers raced 13 more laps before Jonathan Allard stopped on the frontstretch because he was out of tear-offs and couldn’t see. Kerry Madsen flipped in turn two on the restart before Bud Kaeding stopped against the wall in the same corner on the ensuing restart.

Then a few scarce but heavy drops plagued the track and the drivers voted that it was too wet to continue. Officials sent the drivers to the work area in the pits, where they were allowed to make any changes to the car, while push trucks packed the track.

“I’ve never had one of those red flag rain delays and just go out there and work on it and do what you need to,” Sides said. “That was kind of our downfall tonight.

After a delay of approximately 15 minutes, the cars were back on the track. The first restart saw the fourth-and-final red flag when Sammy Swindell, who was running fifth, flipped after contact with seventh-running Lucas Wolfe in turn two.

Tim Kaeding, whose crew was able to fix his damaged nose wing during that red flag, again shot out to a big lead and the competition only closed in one last time. Chad Kemenah’s spin in turn two on lap 31 gave Sides and the rest of the Outlaws a final crack at Kaeding.

However, the veteran created a huge advantage off turn two while Craig Dollansky powered by Sides for the runner-up position.

“On that last restart I got a good run on the outside of Jason (Sides) and Terry (McCarl),” Dollansky said. “Tim had a good car. He knows his way around this place.

“Our car was getting better there toward the end. I was just hanging it down a little in turns three and four where it was getting slick in the middle.”

Kaeding held off Dollansky to become the first repeat winner of the season. Eight days ago Kaeding picked up his first World of Outlaws win since 2009.

“To come out and run top six in the first three races and to win two of them, I definitely could have never told you we were going to do that,” he said. “With everything the way it’s going, I’m definitely going to keep swinging for home runs.”

Sides finished third with McCarl in fourth. Joey Saldana, who was the fast qualifier with a lap of 13.515 seconds, placed fifth.

Donny Schatz was sixth and Kinser seventh, while Austen Wheatley had a career-best finish of eighth. Bud Kaeding finished ninth and Kraig Kinser rounded out the top 10.

Click on this page throughout the night for live updates, including lineups and results for qualifying, heat races, the dash and main events. We will also provide any weather updates when necessary and other interesting tidbits from the pits.

(9:45 p.m.) Tim Kaeding outlasted the competition and the rain to become the first repeat winner of the 2012 campaign. Here are the feature results:

(8:07 p.m.) The horn just sounded for drivers to start getting ready for the feature. A few scarce raindrops have been dropping the last couple of minutes, but nothing consistent.

(7:44 p.m.) Cody Darrah claims the Last Chance Showdown and all six cars advance to the feature. Here are the results:

(7:38 p.m.) Jason Sides outlasted Steve Kinser to win the dash and the pole position for the feature. Here are the dash results:

(7:18 p.m.) Tyler Wolf and Cody Darrah start on the front row of the eight-lap Last Chance Showdown. Here is the lineup:

The top six advance to the feature.

(7:16 p.m.) The dash inversion was an eight, so fast-timer Joey Saldana will start on the outside of the fourth row in the six-lap dash. Here is the lineup:

(7:12 p.m.) Jason Sides led all eight laps and Austen Wheatley finished second to advance to the dash. Here are the results:

(7:07 p.m.) Donny Schatz led all eight laps to claim the second heat race and Lucas Wolfe was second to earn a bid to the dash. Here are the results:

(6:57 p.m.) We just finished Opening Ceremonies and the first heat is being pushed onto the track.

(6:43 p.m.) Here are the lineups for the eight-lap heat races, which transfer the top two to the dash and top six to the feature:

Mitch Olson flipped in qualifying without completing a lap. He is ok. Also, Mike Faria is a scratch for the rest of the race.

(5:29 p.m.) Drivers are climbing into their cars. According to weather.com, there is a storm about to hit the area in the next hour. It doesn’t look too bad and the chance of rain from 7 p.m. to 11 p.m. is no worse than 15 percent.

Also, the scoring system is down here. They are working to fix the situation.

(5:04 p.m.) Since we are weather permitting, here is the tentative schedule for tonight. With 26 drivers signed in, we will have three, eight-lap heat races. They will be inverted by four positions based on qualifying (i.e., the fast qualifier starts fourth in the first heat, the second quickest starts fourth in the second heat, etc.). The top six in each heat advance to the 35-lap feature and the top two to the six-lap dash. The next four fastest in qualifying who advance to the feature also make the dash.

There will be an eight-lap Last Chance Showdown, which will transfer six to the feature.

The weather outlook isn’t great, so everything the schedule and laps of each race are tentative as of now.

(5:01 p.m.) The driver’s meeting is in about 10 minutes. Here is the qualifying order after the draw in, which will also serve as a roster:

(4:03 p.m.) The drivers are in the process of drawing in to determine the qualifying order. The weather is exactly the same as it has been all day — overcast with a light breeze.

(1:44 p.m.) It is overcast right now in Tulare, Calif., for the opener of the Thunderbowl Raceway doubleheader this weekend. The temperature is approximately 60 degrees with a slight breeze. According to weather.com, the chance of rain is 20 percent until 10 p.m., when it doubles to 40 percent.

Cars are rolling into the pits and I’d estimate we have about a dozen here so far. The driver’s meeting is scheduled for 5:30 p.m.

Here is our prerace video: