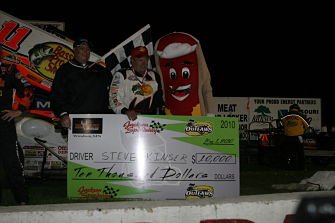 Jackson, MN — Though it had been nearly five years since Steve Kinser raced at Jackson Speedway, the 20-time World of Outlaws champion certainly didn’t forget the fast way around the historic half-mile on Saturday night, as the series made their return to the Minnesota track.

Kinser extended his string of Top-Five finishes with the World of Outlaws at Jackson Speedway to seven, in impressive fashion, finding his way to Victory Lane for the third time at historic fairgrounds facility before a huge crowd.

Kinser used a strong restart on the 18th lap to get under Joey Saldana in turns one and two and won a drag race down the back straightaway aboard the Bass Pro Shops Maxim, taking the lead as the pair hit turn three. For the 20-time series champion it was his second win of the season to bring his amazing career total to 554 A-Feature triumphs. He also moved into second in the series standings as he chases his record 21st title.

“It was good,” said Kinser of his win. “We had a good race car all night. We didn’t get the start we wanted early, but we had a strong restart and got to the bottom and ran the bottom really good. I just had a good car all night really.”

A couple of cautions on the white flag lap led to consecutive green-white-checker finishes. By way of World of Outlaws rules, a race must end with two consecutive green flag laps. Officially the race wound up being 26 laps once the final checkers flew, with Kinser leading the final nine circuits.

“I thought I was all right, we just didn’t know how much fuel we were using,” he explained when asked about the pair of green-white-checker finishes. “Everyone had been using about a gallon a lap, so that last time I wasn’t sure where we were at on fuel. Nobody ran out so I guess we were ok. We got the win, so you can’t complain about that.”

The race began with Kinser leading on the initial start, though a red flag came out prior to the lap being completed, leading to a complete restart. On the second start, Joey Saldana shot to the lead and was in lapped traffic just a few laps into the scheduled 25-lap contest.

Prior to the lap-18 caution, Saldana had a huge lead as he worked his way through lapped traffic. The native of Brownsburg, Indiana, who came into the race second in points, was forced to the work area on the 24th lap with a flat right rear tire and would restart as the last car on lead lap, gaining a couple of spots over the final two laps to salvage a 12th-place finish after leading the first 17 laps.

With the win on Saturday night, Kinser became the first driver this season to win multiple races on a half-mile track, as he was also victorious at Volusia Speedway Park in Florida back in February. In seven career starts at Jackson Speedway with the World of Outlaws, he has an average finish of 2.7.

“We run pretty good on the half-miles and have a good car for the half-miles,” noted the native of Bloomington, Indiana. “I always have run good here and have always liked the place.”

“The Carnahan car felt good tonight,” said Haudenschild. “Lon (Carnahan) is a really good car owner. We have been quick. Leonard (Lee) has had the car good and everyone is working hard on it. Hopefully we can just keep it up front.”

Haudenschild used a strong start to move into the Top-Five, getting around three-time World of Outlaws champion Sammy Swindell on the opening lap. He got by Jason Meyers on the third lap, before he battled Paul McMahan for the third spot for a number of laps, before taking that position on the 15th go-around. Haudenschild then used a slide job on Joey Saldana with six laps remaining to move into second.

“The track got a little rough there at the end and it was hard to find a spot in (turns) one and two,” said the Ohio native. “We’re happy and the car is running good and the Cappetta Engines are running good. We are pleased with everything.”

Lucas Wolfe came home third in his debut at Jackson Speedway aboard the Allebach Racing Maxim to earn his second Top-Five of the season and move back into the Top-10 in the championship standings. The 2008 Kevin Gobrecht Rookie of the Year Award winner lined up 11th and was up to seventh by just the second lap. A last lap battle with Paul McMahan garnered Wolfe the podium finish.

“It was a good run,” shared Wolfe. “We got going good early and just wanted to wait a little bit and not make any mistakes. A few guys got up in the heavy part of the track and I was able to get them. I passed a lot of good race cars here tonight coming from 11th to third. All the good ones are up here (on the podium). Hopefully we’ll be able to string these strong runs together the more we get racing and hopefully it’s a spot we get accustomed to being in.”

McMahan ended up fourth in the Great Clips Maxim after starting third and running third for most of the race. For the veteran driver, it was his eighth Top-10 finish of the season and his fifth Top-Five, all since joining Kasey Kahne Racing, filling in for the injured Cody Darrah.

“We had a pretty good race car tonight,” stated McMahan. “We qualified well and ran good in the heat and the dash. We probably had a second-place car tonight with Joey (Saldana) getting the flat tire. We blew the left sideboard off the top wing and that kind of hurt us at the end of the race. We held on to run fourth. It’s another Top-Five for us and that’s what we need to do every week.”

Craig Dollansky, who hails from Minnesota, came home fifth in the Big Game Treestands Maxim at the half-mile in his home state on Saturday night.

Jason Meyers, the current leader in the World of Outlaws championship standings finished sixth in the GLR Investments KPC to extend his streak of Top-10 finishes to start the year to 13, making him the only driver that has finished among the Top-10 in each and every race.

Tim Kaeding was seventh in the DTR Transport KPC, with Jason Sides eighth piloting the Wetherington Tractor Service Maxim. Donny Schatz was ninth in the Armor All/STP J&J, with Brooke Tatnell rounding out the Top-10 in his first World of Outlaws start of the season.

The World of Outlaws return to action on Friday, May 7 and Saturday, May 8 at the famed Eldora Speedway in Ohio.

World of Outlaws Championship Standings through May 1