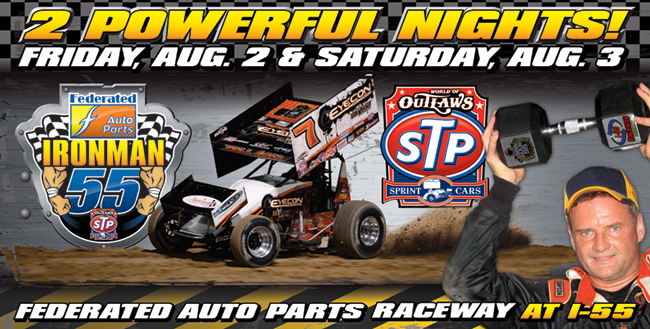 Dollansky Aims for Third Consecutive Ironman Title at I-55

PEVELY, Mo. – July 26, 2013 – It’s perhaps the most challenging race on the World of Outlaws STP Sprint Car Series schedule. It’s a race that demands so much out of a driver that two years ago the winner couldn’t even lift the trophy in victory lane. It’s the fifth annual Federated Auto Parts Ironman 55.

The event returns two days once again this year, Friday, Aug. 2, and Saturday, Aug. 3, in two complete events at Federated Auto Parts Raceway at I-55, just south of St. Louis. Night one is challenging in its own right on the high-banks of I-55, but the second night is a 55-lap display of all that is right about dirt track racing.

Competing all out for 55 laps against the toughest winged sprint car racers in the world on the high-banked 1/3-mile Federated Auto Parts Raceway at I-55 is no small task — especially in the heat of summer in the St. Louis suburbs. Breathtaking speeds and wicked slide jobs. Wheel-to-wheel action on nearly every inch of the track. Fearless competitors taking their 900 horsepower cars to the edge.

In the end goes a check to the winner for $20,000 and a 55-pound dumbbell trophy. Good luck hoisting it in the air when your arms are like rubber.

“I couldn’t do it two years ago, I was drained,” said Craig Dollansky, winner of the past two Federated Auto Parts Ironman 55 titles. “It is a very, very physically demanding race, it’s demanding on your racecar, your equipment and your crew. You definitely have to have a great team, everybody has to be prepared, and I feel great about our Eyecon Trail Camera team going into the event.”

The high-banked track owned by NASCAR Mudsummer Classic pole-sitter Kenny Schrader and groomed by co-promoter Ray Marler is a perfect venue for the Outlaws to showcase their skills. Leaders slice and dice through traffic while clicking off laps in 11 seconds. Never is there a shortage of action.

The race requires 100 percent focus, physically and mentally. No other event presents the same challenge for as long as the Ironman.

“It’s a long race and it’s a demanding race,” said Dollansky, of Elk River, Minn., who has won four World of Outlaws STP Sprint Car Series events in his career at I-55, tied with Steve Kinser for most series victories in track history. “There are a lot of things you have to think about. Ray does a great job of prepping that track where it puts on a great race for the fans. It’s probably one of the raciest racetracks in the country. It has its challenges but it’s a race I can’t wait to get to.

“It just seems like it’s my style of racetrack. We’ve been pretty good there over the years. I can’t really explain it. I really enjoy racing there a lot. It’s unique.”

Joey Saldana is a three-time winner at Federated Auto Parts Raceway at I-55, including the inaugural Ironman event in 2009. Points-leader Daryn Pittman won at Pevely in 2002 while the series’ leader in victories, Donny Schatz, won there in 2006.

The Outlaws first raced at Pevely in 1987 with Brad Doty earning the victory, and have been back every year since 1996.

FEDERATED AUTO PARTS RACEWAY AT I-55