So you’ve just seen your first World of Outlaws event, and you’re totally confused, right? DIRT 101 aims to put your mind at ease. What’s a heat race? Why did the cars race around the track before time trials? How come my favorite driver wasn’t in the final race of the night? And who are these guys, and why is there a wing on the roof of their cars? You’ve come to the right place. The season traditionally opens in early February in Florida and concludes in early November. The 2022 season will wrap up with the World of Outlaws World Finals at The Dirt Track at Charlotte Motor Speedway in Concord, North Carolina, November 2-5. The event includes the World of Outlaws NOS Energy Drink Sprint Car Series, the World of Outlaws Late Model Series, and the Super DIRTcar Series.Races take place from coast to coast and on dirt tracks ranging in size from a quarter-mile to a 5/8-mile. The schedule consists of between 40 and 100 events and is considered one of the most grueling in all of motorsports worldwide.

What is the World of Outlaws Sprint Car Series?

The World of Outlaws NOS Energy Drink Sprint Car Series is the premier sanctioning body for winged sprint car racing in the world. The series was founded by the late Ted Johnson in 1978, giving winged sprint car racers somewhere to compete with uniform rules and guaranteed purse money.

What is a Sprint Car?

A World of Outlaws Sprint Car is a purpose-built open-wheel race car that must weigh at least 1,400 pounds with the driver in the car. The 410-cubic inch engine is fueled by methanol and produces approximately 900 horsepower.

Why is there a wing on the top of the car?

A large wing on top of the car with sideboards that face opposite directions produces a great amount of downforce to help keep the car planted on the track and turn in the corners. The wings also help to absorb energy in the case of the car getting airborne in an accident. Top wings became prominent in the early 1980s. The cars also have nose wings.

Why are the cars pushed to start?

Sprint Cars do not have starters, so push trucks are used to fire the engine and get the car in gear. The car only has an in/out drive, no reverse.

Where do the World of Outlaws Sprint Cars race?

The Series races from coast to coast. Some of the most well-known tracks on the circuit include: Eldora Speedway in Ohio, Knoxville Raceway in Iowa, Silver Dollar Speedway in California, and Williams Grove Speedway in Pennsylvania.

View the Schedule
View the Map

How long is the season?

The season traditionally opens in early February in Florida at the DIRTcar Nationals and concludes in early November with the World of Outlaws World Finals at The Dirt Track at Charlotte in Concord, NC.

Races take place from coast to coast and on dirt tracks ranging in size from a quarter mile to a 5/8-mile. The schedule consists of about 90 events and is considered one of the most grueling in all of motorsports.

What are the World of Outlaws race night formats?

Drivers Meeting — Prior to each night of racing, all World of Outlaws drivers and crew members attend a mandator meeting conducted by Series Officials. The meting outlines the night’s racing and any procedural changes that may be in place.

Hot Laps — Group practice sessions of three or more laps (depending on track size) are run at speed for drivers to ensure their cars are ready for qualifying. Groups are determined by a draw that also determines the order for time trails.

Qualifying (Time Trials) — Each driver runs two timed laps to determine where they will start in the Heat races. Any competitor who misses his spot in the qualifying order by more than two places is allowed one lap at the end of time trails with restrictions placed on how well they can officially be scored.

Heat Races (or Heats) — A series of 8- to 12-lap races (depending on size of track) that determine which cars will move on to the Feature or Last Chance Showdown. The top five cars in the Heats transfer when there are four heat races. If there are three heat races, then the top six transfer to the Feature. The number of Heats depends on the number of cars.

Last Chance Showdown — This is the final chance a driver has to make it into the Feature. The top 4-6 drivers (depending on car totals/heat races) in an 8 to 12 lap race (depending on track size) will transfer to the back of the Feature lineup.

NOS Energy Drink Feature — The final race of the night determines the champion, who enters Victory Lane followed by the second and third place finishers. These three constitute the Podium. Depending on the size of the track, the Feature usually ranges from 25 to 40 laps, which is predetermined and shared with the drivers and teams at the Drivers Meeting.

What are the World of Outlaws Sprint Car Radio Frequencies? 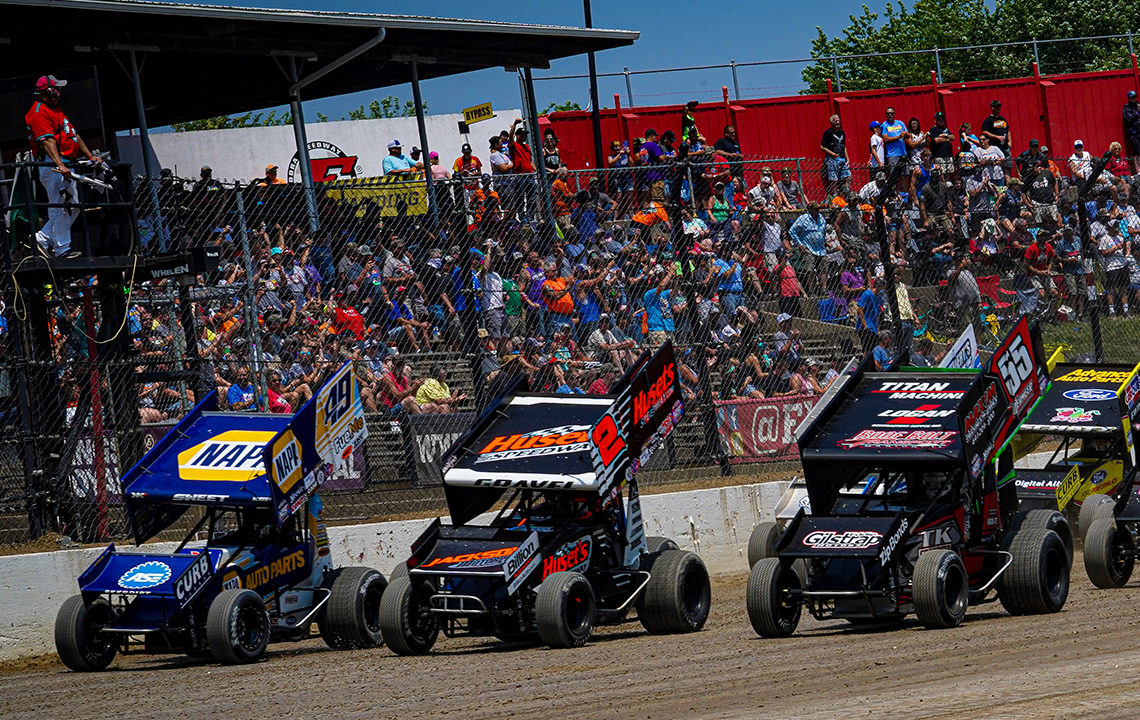 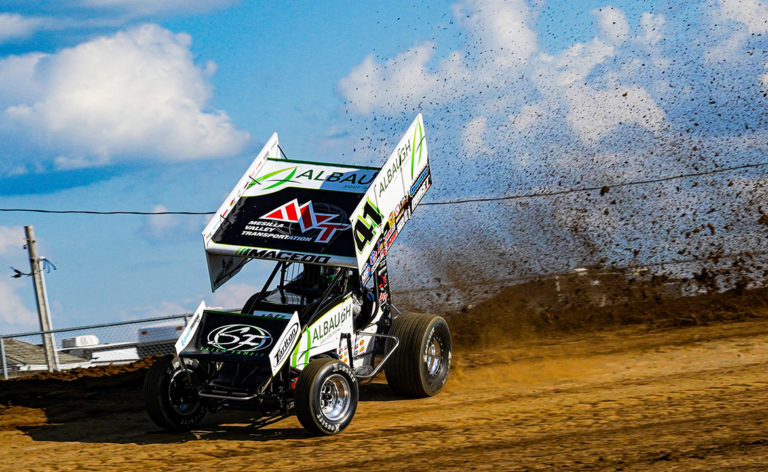 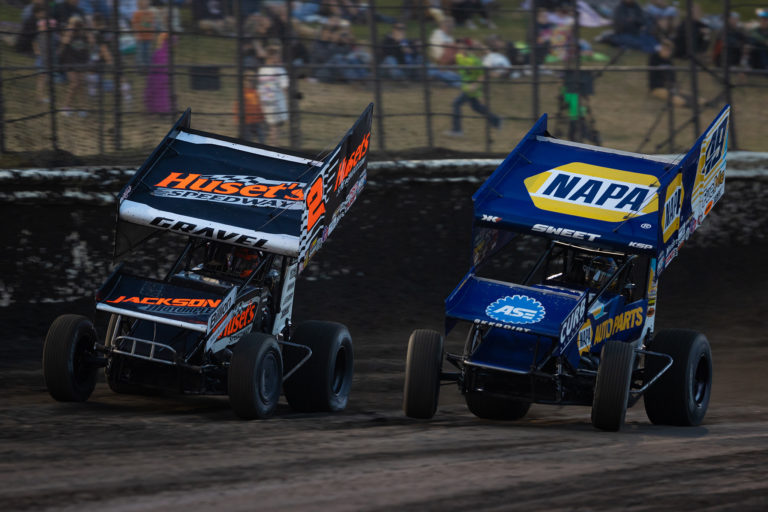 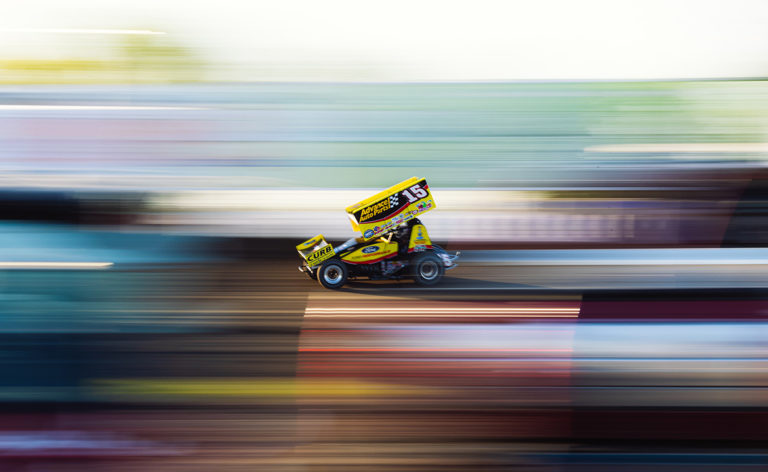