COMING SOON: One Month Away from Midwest Triple-Header at Jacksonville & I-70 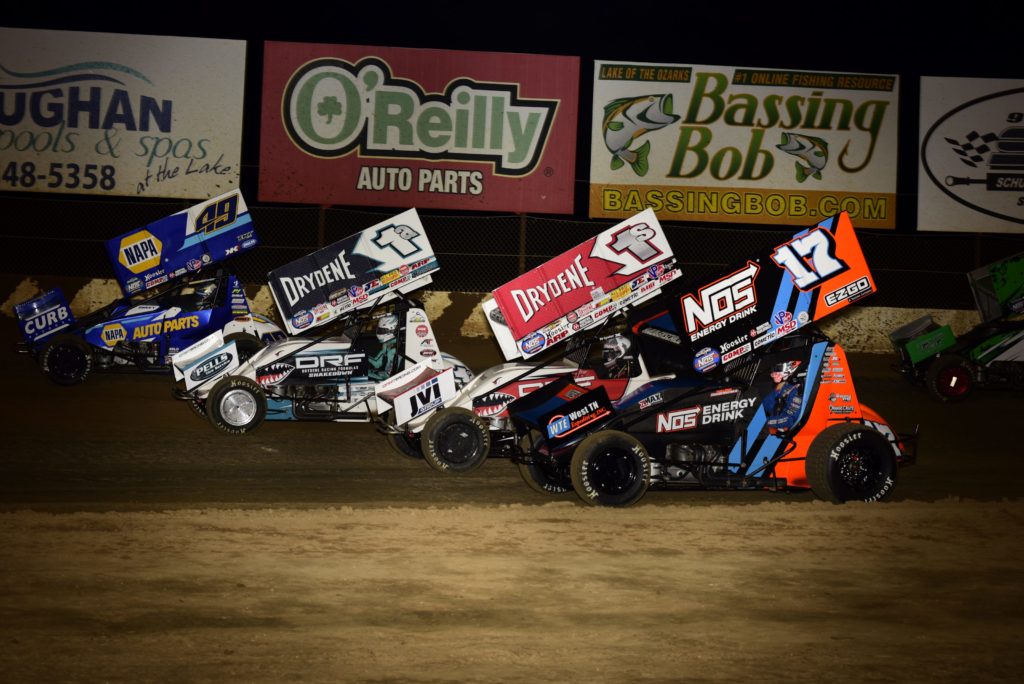 A few short days after the much-anticipated Bristol Throwdown, the World of Outlaws NOS Energy Drink Sprint Car Series will keep the grind of an 80+ race schedule rolling with a Midwestern triple-header.

On Thursday, April 29, the Series makes its only appearance all year in The Illini State with a midweek stop at the always-exciting 1/4-mile bullring of Jacksonville Speedway. All three previous events at the Jacksonville, IL track have been nothing short of thrilling, and you should expect just the same next month.

A four-hour jaunt down the road will lead teams to the newly-renovated and state-of-the-art I-70 Motorsports Park in Odessa, MO on Friday, April 30 and Saturday, May 1. The two-day FVP Platinum Battery Showdown will mark the first appearance by The Greatest Show on Dirt at I-70 since the last race in 1986.

Starting the triple-header at Jacksonville will kick the weekend off with loads of excitement around every corner. The track has hosted three previous events with three incredible features at each show. NASCAR Cup Series star Christopher Bell (2014), 105-time World of Outlaws winner Joey Saldana (2016) and current championship contender Carson Macedo (2019) are former winners.

Brad Sweet and Donny Schatz are the only two drivers with a top-five finish in every appearance at Jacksonville, but neither have scored a win at the track yet. Sweet’s Kasey Kahne Racing, NAPA Auto Parts #49 has finished of 4th – 3rd – 2nd, while Schatz’s Tony Stewart/Curb-Agajanian Racing, Carquest #15 has results of 3rd – 4th -4th at the bullring.

Currently a month out from Jacksonville, Sweet leads the points in pursuit of his third consecutive World of Outlaws title, Schatz is chasing his 300th career win and 11th Series title, and Macedo is on the prowl and hungry for success in his new ride at Jason Johnson Racing.

“I love Jacksonville,” Macedo excitedly said looking ahead. “From the very first time I went there in a Midget, the place was just awesome. If you look back on the highlights of all the Outlaw shows there, they’re all amazing. I’m excited to get back there and try to back up my win from 2019. That race with Sheldon [Haudenschild] was epic. Hopefully we can get another win for the [Jason Johnson Racing] #41.”

Following a one-night stand at Jacksonville, the World of Outlaws shine in the grand re-opening of I-70 Motorsports Park on Friday, April 30 and Saturday, May 1 with the FVP Platinum Battery Showdown.

The Odessa, MO track debuted on the Series schedule in 1981 and hosted 19 events until the final race on June 11, 1986. The track was converted to asphalt and ran NASCAR sanctioned shows until it closed in 2008. Thanks to Chris Payne and staff, it’s now re-opening as a state-of-the-art facility in 2021.

Originally scheduled to debut in 2020, the COVID-19 pandemic put a stop to that and delayed the process. Now, the track has hired veteran Tommie Estes Jr. to help run the facility. Estes has previously served as ASCS Competition Director for 13 years and ran Dodge City (KS) Raceway Park for the last decade.

“Impressive is the best word to describe what the new owners of I-70 Motorsports Park have built,” Estes Jr. told SPEED SPORT. “I’m really glad to be a part of putting it all together. I know the drivers and fans will be thrilled every time they come to this new facility. It’ll be exciting next month when fans from Missouri, Kansas, Nebraska, and Iowa will get to see the best teams in sprint car racing battle here.”

Along with proven champions Sweet and Schatz and Jacksonville winner Macedo, the young core of the Outlaws will be hungry to add more wins to their collection with three races up for grabs. Already this season, Sheldon Haudenschild has won twice and Logan Schuchart, David Gravel, Aaron Reutzel have each won once.