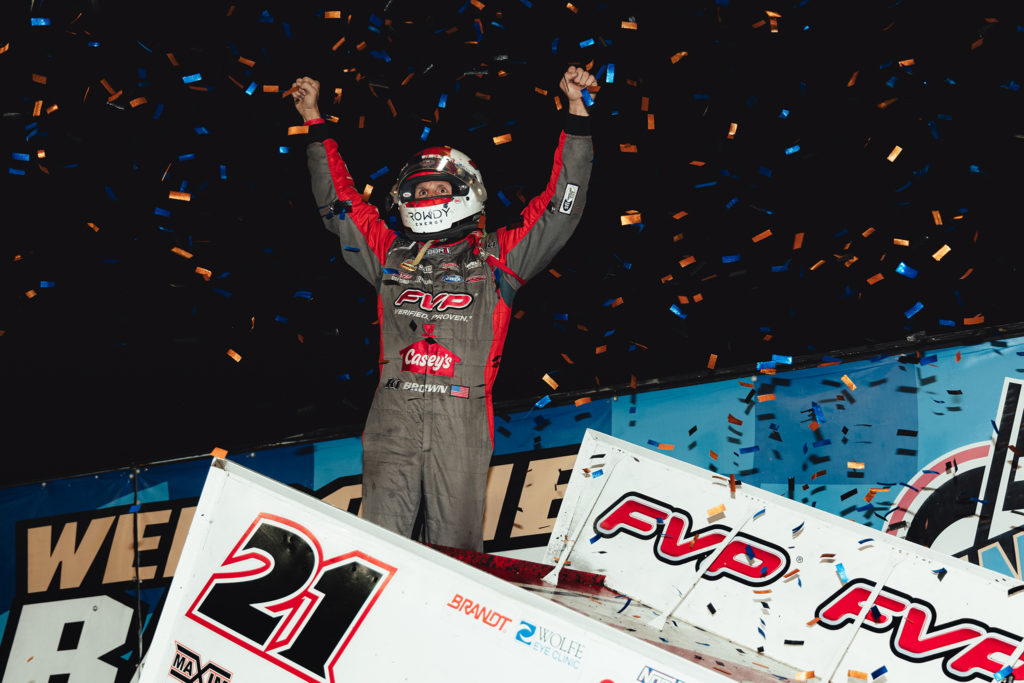 All it took was a little motivating factor for Brian Brown to return to the stage he loves more than any other.

On Tuesday evening, prior to any event of the 60th NOS Energy Drink Knoxville Nationals pres. by Casey’s, Brown said “They’re alredy counting us out. They really don’t think we can do it. I hear what people say and I read it to. I l ove it. Keep motivating me.”

On Thursday night, which turned into Friday morning, Brown proved the doubters wrong and returned the FVP Parts, Casey’s General Stores #21 to victory lane at Knoxville Raceway in a wild and wacky Nationals prelim.

The Grain Valley, MO native scored his 56th career win at the iconic 1/2-mile by leading the final 24 of 25 laps, but it wasn’t without challenge from a man Brownie himself declares “The GOAT:” Kyle Larson. Charging from 21st-to-2nd, Larson put pressure on Brown in the closing stages, but there was no stopping “Blackjack” on this night.

Brown ultimately earned his third Knoxville Nationals preliminary win, locking himself into Saturday’s A-Main for the 11th time in his career, this time with a ninth-place starting position for ther 50-lap, potentially $200,000/Win race.

“These two guys right here are probably the two hardest runners in the country,” Brown praised podium finishers Larson and Brent Marks. “I honestly didn’t think it was going to be a good race, but the Duncan’s made their magic work. I was overthinking myself early in the night,but we got that solved real quick. Once we were in clean air, I felt like we were as good as anyone at all.”


Before the checkered flag flew at 1:10am CT, a whole barrage of storylines presented themselves in Thursday’s second Knoxville preliminary.

To kick things off, substitute pilot Kasey Kahne drove the Roth Motorsports #83 throwback design of the 1998 Beef Packers machine to Slick Woody’s QuickTime honors over Tyler Courtney by two, one-thousandths of a second.

Come A-Main time, it seemed near impossible to get the 25-lap race rolling. After the inital start was called back, the red flag flew when Parker Price-Miller was launched into the turn one fence and went for a scary ride. He climbed out under his own power, though.

From there, it only took one more laps to bring more carnage to the table. Shooting the gap in turn three, Carson Macedo made contact with Paul McMahan battling for fourth and sent both cars beelining to the wall. They hit the fence and flipped over, but more cars came piling in as Kerry Madsen, Sammy Swindell, Marcus Dumesny & Sawyer Phillips.

Once underway, Sam Hafertepe Jr. of Sunnyvale, TX paced the opening circuit. His lead was short-lived, though, as Brown came firing in on all cylinders to slide by for the race lead on Lap 2. He had seized a lead that he would never relinquish.

The middle stages were plagued by more cautions, but finally the last restart resumed on Lap 13 and went the distance. Larson, who started 21st and charged to second, was catching Brown until the #21 found something extra and snuck away to win it 1.130-seconds.

For Larson, who had hoped for a seventh at best, the wreckage became his friend and allowed him to steal several positions away. Aboard the Paul Silva #57, he inched his way forward until he ran out of space once reaching second. Hell start Saturday’s A-Main in the third position with his first Knoxville Nationals title on the line.

“I got extremely lucky missing that big wreck,” Larson admitted. “That deal took out a lot of good people, so I think I came from like 10th, you know, not the very back. This is my favorite week of the year. I can’t wait for Saturdyay.”

Closing out the podium was Brent Marks in his own operation, who has earned the fourth-starting spot in Saturday’s A-Main.

Rounding out the top-ten at Knoxville is Brad Sweet in fourth. Rico Abreu in fifth, Kasey Kahne in sixth, Austin McCarl in seventh, Ian Madsen in eighth., Kraig Kinser in ninth, and Sye Lynch in tenth.