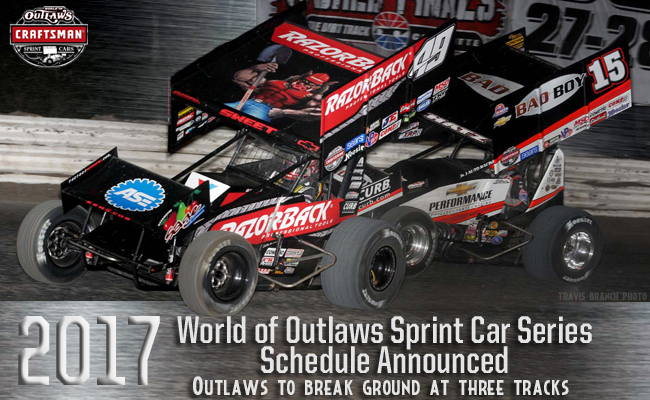 CONCORD, N.C. – December 8, 2016 –The World of Outlaws Craftsman® Sprint Car Series solidifies its 2017 season not only on familiar grounds – visiting some of the most storied tracks nationwide – but also by adding three new tracks to an already big stage.

The series is scheduled to visit 25 states and one province for its upcoming season. Notably, the Greatest Show on Dirt will leave its usual tracks at some of dirt racing’s most prestigious venues.

The grand introduction of the Outlaws’ 40th season will be at the DIRTcar Nationals from February 17-19 at Volusia (Fla.) Speedway Park. In the event’s 45th running, the Sprints will be accompanied by the World of Outlaws Craftsman® Late Model Series, and the Super DIRTcar Series, among others. All divisions will be seeking the coveted “Big Gator” trophy, along with bragging rights to start off the season.

As usual, the season will be headlined by its stops at Eldora (Ohio) Speedway and Williams Grove (Pa.) Speedway. Eldora will host six days of action-packed racing, including the #LetsRaceTwo blockbuster show May 12-13 and Kings Royal to conclude a triple-header on July 15. Williams Grove Speedway will host seven days of racing, including the Champion Racing Oil National Open from September 28-30.

A highly anticipated mid-season event will feature Sprint car’s cream of the crop, as the 5-Hour Energy Knoxville Nationals hits the scene August 9-12 at Knoxville (Iowa) Raceway. The Outlaws will seek to extend the event’s storied 57-year history with yet another barn-burner for the books. Last season series regular Jason Johnson celebrated an emotional victory, beating out superstar Donny Schatz for a night to remember.

Traditionally, the Outlaws have invaded Calistoga (Calif.) Speedway for the Wine Country Outlaw Shootout in April. However, in the series’ 26th year making the stop, the event at the stoic half-mile has moved forward to September 15-16 in hopes of more reliable weather. This will be the first time the Outlaws return to Calistoga for an early-September race weekend since 2007.

Continuing a streak of 15 stops in Canada since 2011, the series will make its annual stop at Ohsweken (Ont.) Speedway for the Arrow Express Six Nations Showdown. Schatz, the reigning race champion, has won the show three times since the series’ inaugural stop in 2007.

The series will make a cameo appearance at “Racing’s Biggest Party” in the Northeast to headline Fulton Speedway’s Saturday Night Special. The sprint car showdown on October 7 will be a part of the 46th Annual NAPA Auto Parts Super DIRT Week in Upstate New York.

To conclude a rigorous 90-plus race schedule, the Outlaws will settle the points championship at the Bad Boy Off Road World Finals from November 2-4. Last season, Schatz solidified his eighth championship campaign at The Dirt Track at Charlotte, a series best. Not only was a champion crowned in front of a jam-packed crowd, but the three-day extravaganza also decided the final finish for a narrow points battle between the following three positions in points.

The complete 2017 schedule is listed below and can be found at www.WoOSprint.com. Tickets for select events are on-sale now at dirtcar.ticketforce.com or by calling 844-DIRT-TIX (347-8849).