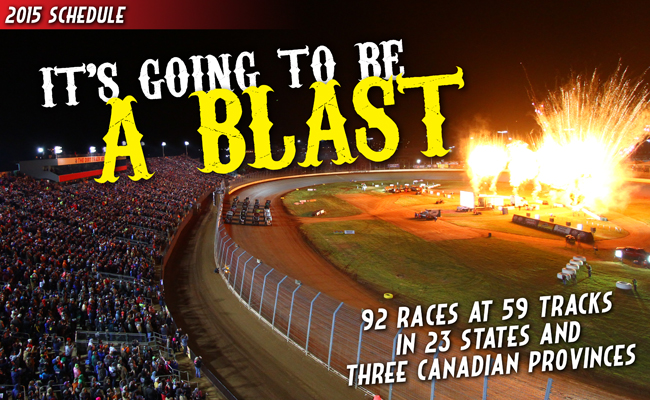 “The schedule for the upcoming season represents another busy year for the World of the Outlaws STP Sprint Car Series,” said World of Outlaws CEO Brian Carter. “Coming off of one of the most successful seasons in series history, we have more two-day destination events than we have had in a long time and are looking forward to the great potential of the year ahead.”

The season kicks-off Feb. 13-15 at the DIRTcar Nationals presented by Summit Racing Equipment at Volusia Speedway Park in Barberville, Fla. The series then heads west for two nights in Las Vegas followed by its only visit to Arizona at USA Raceway in Tucson and a big swing through California that runs through mid-April and includes the now two-day FVP Western Spring Shootout at the Stockton Dirt Track on March 21-22.

Golden State native Brad Sweet, the 2014 Kevin Gobrecht Rookie of the Year, will play host to the series on April 8 when the Outlaws invade Placerville Speedway for the first time since 1992. It will mark fifth event in World of Outlaws history at the quarter-mile track.

For the second consecutive season, the Outlaws return to the birthplace of the series, Devil’s Bowl Speedway in Mesquite, Texas, for the Texas Outlaw Nationals on April 24 and 25, then head to the Midwest for the first time of the year for races in Oklahoma, Missouri, Indiana and Ohio.

The series’ first swing through the Northeast includes a return to Lincoln Speedway, the Morgan Cup Challenge at Williams Grove and a return to Weedsport Speedway for the first time since 1993.

A race back through the Midwest is highlighted by the Boot Hill Showdown at Dodge City Raceway Park, where Tommie Estes was named promoter of the year in 2014, then followed by the two-day Cedar Lake Outlaw Showdown at Cedar Lake Speedway on July 11 and 12. The Outlaws will compete for two, $10,000-to-win features at the New Richmond, Wis., track, marking another new weekend destination event to the schedule.

The ‘Month of Money’ once again kicks off at the annual Brad Doty Classic at Limaland Motorsports Park in Lima, Ohio on July 15 before heading to Eldora Speedway for the Kings Royal weekend and a second swing through Pennsylvania, Canada and the Midwest. The celebrated month wraps-up with the Ironman 55 at Federated Auto Parts Raceway at I-55 on Aug. 7-8 and the $150,000-to-win Knoxville Nationals on Aug. 12-15.

Canada welcomes the Outlaws north of the border for five dates in 2015. The first swing begins July 28 at Ohsweken Speedway in Ohsweken, Ont., before heading east to Brockville (Ontario) Speedway in and Autodrome Drummond in Drummondville, Que., near Montreal. The Outlaws return to Castrol Raceway in Edmonton, Alberta, Aug. 28-29 for the Oil City Cup. Defending series champion Donny Schatz will be aiming to repeat his incredible Canadian sweep from last season that helped to propel him to his sixth World of Outlaws crown.

The Outlaws will sweep through the West Coast for a second time in August and September, with events at Skagit Speedway north of Seattle, Grays Harbor Speedway just west of Olympia, Wash., Cottage Grove Speedway near Eugene, Ore., Silver Dollar Speedway in Chico, Calif., and Antioch Speedway between Oakland and Stockton.

As the championship battle hits the stretch run in October, the series will take on a newly expanded three-day National Open at Williams Grove Speedway in Mechanicsburg, Pa.

“The National Open is already one of the biggest events on the World of Outlaws schedule,” Carter said. “With a passionate fan base and a storied facility, we are excited for the opportunity to help make this great event even better.”

Finally, in what has become one of the most anticipated dates on the schedule, the season concludes Nov. 5-6-7 at the Bad Boy Buggies World of Outlaws World Finals at The Dirt Track at Charlotte, where the World of Outlaws STP Sprint Car Series joins the World of Outlaws Late Models and Super DIRTcar Big-Block Modifieds for three nights of action to decide the championship winners in each of the three series.

Tickets for many of the events are on sale now at www.WorldofOutlaws.com/tickets. Future ticket opportunities will be announced as they come available.