YIN AND YANG: Team Zero Cashes in at Lavonia 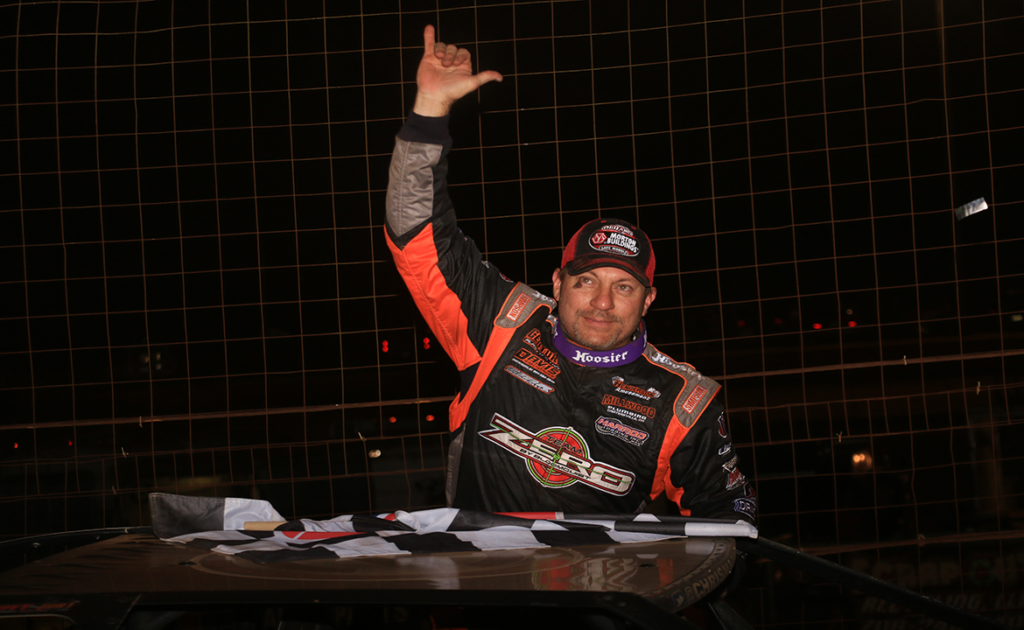 LAVONIA, GA – It’s not every day that race fans get to see two teammates finish one-two on the podium, let alone battle it out for the lead, side-by-side in the last 15 laps.

That’s exactly what the a packed Lavonia Speedway audience was treated to on Thursday night, with the two “Team Zero” cars of Chris Madden and Scott Bloomquist relentlessly battling for position and putting on a stellar show out front that ended with Madden in Victory Lane for his second World of Outlaws Morton Buildings Late Model Series triumph of the year and 26th of his career. Bloomquist held on for second, fending off a fierce charge from home-state driver Brandon Overton in the closing laps.

Overall, both of the Sweet-Bloomquist Chassis pilots had terrific nights. Second-place finishes in their Drydene Heat races set Madden up for a pole position redraw result and earned Bloomquist a starting spot inside row two.

From the drop of the green, Madden took off instantly, grabbing the lead into turn one with Brandon Sheppard hot on his tail. The two were quickly locked into a battle of their own, Sheppard working the bottom lane trying to get underneath Madden in the middle.

Sheppard came close several times to pulling even with Madden in his bid for the lead, but could never make the move. A restart at halfway restacked the field and gave Sheppard another shot at the leader, but again, could not get by Madden’s #0M.

Another restart came just four circuits later. Sheppard decided to try the top side of the speedway on Madden shortly after, but slipped over the cushion and lost two spots to Bloomquist and Overton.

Overton cracked the whip with 15-to-go and caught the rear of the in-progress Bloomquist and Madden battle for the lead. Bloomquist hounded his teammate down low, while Madden stayed smooth in the middle to defend his lead. Overton entered the picture and tried every lane to get around the two teammates, but after several laps of inside-outside racing, he could not find a way around the leaders.

A final restart with seven laps remaining allowed Madden to pull away a bit with less than 5-to-go and take it all the way home for his first World of Outlaws win at Lavonia. Both teams are happy, both drivers are happy, and it’s been one incredible summer of racing for Scott Bloomquist Racing that shows no signs of slowing down heading into the fall.

Both battles Madden fought with Sheppard and Bloomquist were relentless at times, but through the restarts and all, Madden had his veteran skills working overtime for him on Thursday night.

“I just kept my composure and didn’t miss my marks,” Madden said. “I wasn’t even trying to ‘hold them off,’ I just had to find where I was the best at, and I found it, and won the race.”

Residing in Gray Court, SC, Madden is certainly no stranger to these racy Southeast tracks. And he knows that if you want a shot at the win, it has to be a full-night performance to start and finish up front. He was the last to redraw for Feature starting spots, and the pole was all that was left when his name was called. Little bounces like those went his way on Thursday night, fueling his and his team’s victorious efforts.

“Being on the pole is definitely a big key here,” Madden said. “The racetrack widened-out late, we had things go our way tonight and got the win. Everything hasn’t always went my way, and we’ve had to work hard for wins. Tonight, we just had some things go our way for a change.”

Bloomquist played an incredible amount of defense in the final laps, holding off Overton’s late-race rally and bid for the lead. He said the race didn’t exactly start off the way he planned them to, but his car came on later in event, giving him the attributes to protect his team’s one-two finish.

“I couldn’t really hang as good as I wanted to early, but I thought if I just mileaged my tires and didn’t push it too hard, I might have been a factor later in the race,” Bloomquist said.

In sum, it was just the peachiest of nights at the racetrack for Team Zero. Like the yin-yang symbol that once adorned Bloomquist’s car, he and Madden were right in-sync with each other through all 50 laps, making it the most fun the Mooresburg, TN-driver has had in the racecar in recent memory.

“I very rarely say that it was a fun race, and if it had been anybody else but Chris with me running second, [I’d say] it probably wouldn’t have been a fun race,” Bloomquist said with a smile. “But it was enjoyable to race with Chris like that, both coming out unscathed with good finishes.”

After a rough original start, third-place finisher Brandon Overton seemed to have driven his car as hard as anyone else in the second half of the Feature to get back to the front. At the drop of the green, Overton said he spun his tires, sending him several spots back to eighth place. But he cracked the whip on the top side and made it all back up, capping off a solid night for the Rum Runner Racing entry.

“Notoriously, I think these races around here are won on the bottom,” Overton said. “If you get out of that bottom, you just go backwards. But where I was at, I really felt like I had nothing to lose, so I was probably the first one to go to the top. When I moved up there, they were just in the wrong spot on the racetrack for a while.”

The Outlaws are back in action again tonight at Cherokee Speedway for the inaugural Mike Duvall Memorial, Hot Laps go live on DIRTVision at 7:30 p.m. ET!