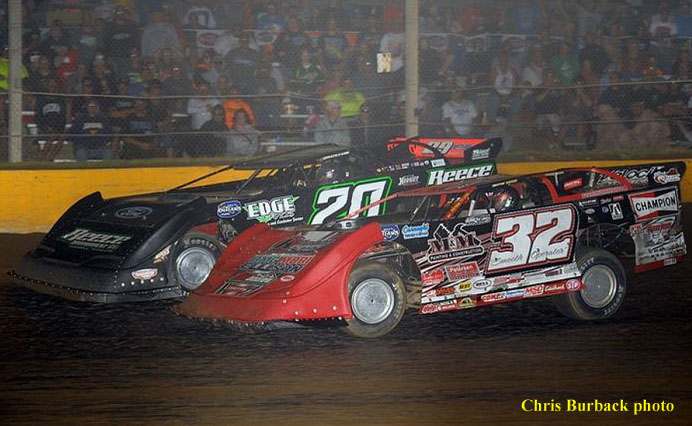 After his runner-up finish in Saturday’s USA Nationals main event, Bobby Pierce was sweating like he had been on a treadmill for the previous half-hour instead of wheeling his No. 32 Late Model around Cedar Lake Speedway’s 3/8-mile oval.

But the perspiration wasn’t caused by heat or exhaustion. Instead, it was a result of the intense focus Pierce used while battling for the World of Outlaws Late Model Series event’s $50,000 winner’s paycheck.

“The sweat on my face, it’s not even racing sweat,” Pierce, 17, of Oakwood, Ill., said after settling for the 100-lap race’s $20,000 second-place prize following a dramatic back-and-forth battle with veteran racer Jimmy Owens of Newport, Tenn. “It’s focus sweat. You’re just so focused that it’s almost like playing a game of chess or something. You just gotta focus yourself on the track and get in the right mindset because every tenth (of a second) counts with these guys. That’s something as a young driver I’m really trying to get more off – more of that long distance focus.”

In a sport where age and experience often triumphs over youth and enthusiasm in major events, Pierce is doing his best to overcome that trend. A look at the second-generation driver’s results in 100-lap races over the past three years proves his continued improvement in the long-distance events.

After a ninth-place finish in the 2012 USA Nationals, Pierce scored three top-five finishes in major 100-lap races in 2013: third in Fairbury American Legion Speedway’s Prairie Dirt Classic; fourth in Eldora Speedway’s prestigious World 100; and third in Magnolia Motor Speedway’s Cotton Pickin’ 100. The upward trend has continued this season with Pierce grabbing his first 100-lap victory in a $12,000-to-win event at Macon Speedway’s fifth-mile oval in May and finishing third in Lucas Oil Speedway’s Show-Me 100 before his runner-up performance at Cedar Lake.

While falling short of what would have been by far the biggest victory of his young career, Pierce at least continued to advance in his learning curve. In leading laps 79-86 Saturday night, Pierce enjoyed his first taste of setting the pace in a crown jewel event. It was a new experience for Pierce and one in which he learned valuable lessons from racing the veteran Owens.

“To be honest, I was kind of counting my eggs before they hatched,” said Pierce. “I kind of backed it off a little bit there right when I got the lead. Not a whole lot, but just enough to where I think I was being too safe. I think it screwed up my corner entry and that screwed up my exit. You’re looking for inches out there. If you miss it by an inch, it costs you.”

“I knew Jimmy was coming and I was thinking about moving up, but it’s just so hard to move up after you’ve been running the bottom like I was the whole race. I was this close to trying it, but I just didn’t do it. Then Jimmy snookered me on the top and done a great job, like the veteran that he is.”

But Diemel didn’t allow the same bad luck that’s plagued him in his previous WoO LMS events this season to hold him down.

Without enough time to repair his Super Late Model car, Diemel, who was also competing in the weekend’s NASCAR Late Model events at Cedar Lake, ran his spec-engine Late Model in his USA Nationals heat race later Friday evening. Even at a horsepower disadvantage, Diemel advanced from the tail of the 20-lap prelim to salvage a fifth-place finish, vastly improving his chances of earning an A-Main starting spot through a B-Main on Saturday.

With his Super Late Model car repaired for Saturday’s action, Diemel did more than just transfer to the main event. He dominated the first of Saturday’s two B-Mains, advancing from his fifth starting spot to win by more than a straightaway and earn his third career start in $50,000-to-win USA Nationals feature.

In a 100-lap A-Main that ran caution free after seven laps, Diemel picked up four positions to end the weekend with a 15th-place finish.

“We were definitely dealt some bad cards to start with,” said Diemel, who per WoO LMS rules for two-day races was allowed to switch back to his Super Late Model car for Saturday’s action without giving up his B-Main starting spot. “I was thinking ‘Here we go again,’ but it didn’t turn out all that bad. We probably didn’t tighten our car up enough for the A-Main, so we were about a 15th-place car anyway. But to come back like that after the problems we had, that was a pretty good run for us.”

Diemel may have been satisfied with his performance considering the uphill battle his team faced after Friday’s mechanical woes, but it wasn’t the result he had hoped for entering the weekend. After putting himself in position to claim an upset victory in the 2013 USA Nationals only to succumb to engine troubles after leading the race’s first 53 laps, Diemel headed back to Cedar Lake this year hoping to pick up where he left off before the heartbreaking letdown.

“We were really hoping for a good weekend after the way we ran last year,” said Diemel. “The car felt really good in the B-Main. The way it ended up, we were probably a 15-place car in the feature, but then you never know. If we don’t have that problem and we get to start closer to the front, who knows?”

The USA Nationals will once again hold the same weekend on the WoO LMS schedule next season with the 28th running of the event set for July 30 – Aug. 1, 2015. The event will again pay $50,000 to the winner and will follow the same format with a tune-up race on Thursday, July 30, followed by USA Nationals preliminary action on Friday, July 31 and B-Mains and the 100-lap A-Main on Saturday, Aug. 1.

Additionally, Shawano (Wis.) Speedway will again host the WoO LMS a few days prior to the USA Nationals in 2015 with the tour set for a visit to the half-mile oval on Tuesday, July 28, 2015. A rain date is set for Wednesday, July 29.

Tripleheader up Next for WoO LMS

Delaware, which was originally scheduled to host the tour on May 29 before rain postponed the event, saw 2006 WoO LMS champion Tim McCreadie of Watertown, N.Y., claim last year’s series race, while Potomac hosts the tour for the first time since two-time champion and current points leader Darrell Lanigan of Union, Ky., claimed the track’s inaugural WoO LMS event in 2004. Winchester was the site of one of the biggest upsets in WoO LMS history last season with Dale Hollidge of Mechanicsville, Md., winning in his first series A-Main start.