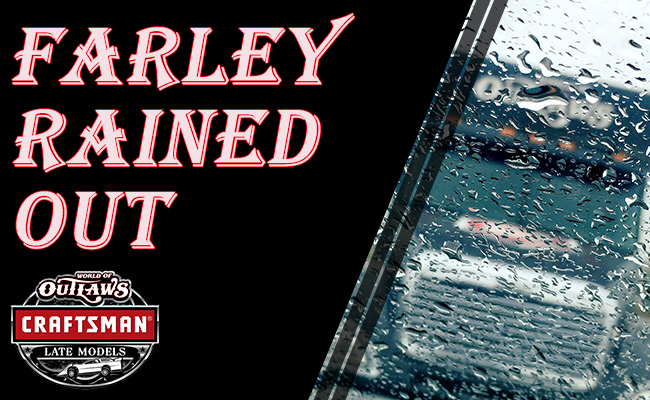 Series to take a well-deserved break before returning to action on Thursday, August 16 at Georgetown Speedway

FARLEY, IA — Aug. 6, 2018 — Mother Nature has uninvitedly joined up with the World of Outlaws Craftsman® Late Model Series for the last event of a two-week stretch of races throughout the midwestern United States. A deluge of overnight showers and thunderstorms at Farley Speedway (IA), has forced Series and track officials to cancel the $10,000-to-win Farley 50. A suitable makeup date could not be found, so the event will not be rescheduled.

Those that purchased tickets for the event will automatically receive an account credit to their mydirttickets.com account. This credit can be used toward any event at worldofoutlaws.com/tickets for up to two years.  If a refund is preferred, ticket purchasers have until September 14, 2018 to request one by calling 844-DIRT-TIX (Monday-Friday, 9AM-5PM ET).

“We were really looking forward to racing at the Farley Speedway. Would’ve been a nice way to cap off a really good road trip,” stated World of Outlaws Craftsman Late Model Series Director Matt Curl. “The good thing about this, if there is such a thing about a rainout, is that the crews and drivers can take a step back and relax for a little bit,” added Curl, “take a couple of days to relax and recharge before getting back to work, before we head out East.”

The World of Outlaws Craftsman Late Model Series will now get an extended break after a two-week stretch on the road before the next events on the 2018 calendar in a key swing through the eastern United States. It all starts on Thursday, August 16. Georgetown Speedway (DE) will host the Outlaws in the $10,000-to-win Fulton Bank 40, which marks the second-ever appearance at the fast half-mile clay oval. In the inaugural event in 2017, eventual Rookie of the Year Devin Moran scored the big payday over Delaware favorite and 2010 Rookie of the Year Austin Hubbard. Go to the track website for ticket information at: thegeorgetownspeedway.com

Then, the most powerful stock cars in the world head to the Keystone State of Pennsylvania for three races in three days. The teams will travel just over 450 miles and visit four different race tracks in four days as the Pennsylvania Trifecta starts on Friday, August 17 at the site of the first-ever race in World of Outlaws Craftsman Late Model Series history back in 1988, Williams Grove Speedway, located southwest of Harrisburg in Mechanicsburg, PA. Williams Grove is historic for the Outlaws as 30 years ago, the track hosted the inaugural race for the series back on April 22, 1988. Legendary five-time NASCAR Weekly Series National Champion Larry Phillips of Springfield, MO won that first event.

The Outlaws then heads out about 60 miles northwest to another historic half-mile known for its Sprint Car heritage, Port Royal Speedway, located southeast from Penn State University in Port Royal, PA. On Saturday, August 18 the Outlaws make their fourth-ever appearance there. Defending Series Champion Brandon Sheppard grabbed the win in the last event there in 2017.

Finally, to wrap up the weekend, the Outlaws will take a four plus hours trip northwest, just east of the Ohio / Pennsylvania state line and along the shores of Lake Erie, to the fast 3/8-mile of Eriez Speedway in Erie, PA for the 10th ever race at the track. Sheppard would also win the Series’ last event there in 2017 on his way to the Championship.

ON THIS DAY: Richards & Bloomquist Score World of Outlaws Wins