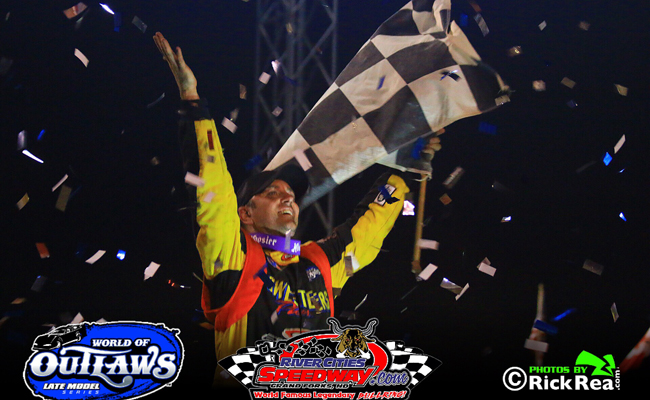 Mastering a challenging track surface at River Cities Speedway, McCreadie, 41, of Watertown, N.Y., charged forward from his seventh starting spot in Friday’s World of Outlaws Late Model Series Wild West Tour feature at the 3/10-mile oval and led the final 33 laps of the 50-lap race to earn his first series victory of the season.

McCreadie, the 2006 WoO LMS champion, topped an early battle with Chub Frank of Bear Lake, Pa., and hometown driver Dustin Strand and turned back challenges from Donny Schatz of Fargo, N.D., on a late restart to earn $10,700 for the 29th WoO LMS victory of his career.

“I left it all out there,” said McCreadie, who earned his second-career WoO LMS victory at River Cities. “I hope it was fun for everyone up there (in the grandstands) because that’s all I had.”

McCreadie’s Sweeteners Plus Rocket Chassis crossed the finish line 2.329 seconds ahead of eighth-starting Josh Richards of Shinnston, W.Va., who made a late charge into the top five and took the second spot from Schatz on the final lap. Schatz, the six-time World of Outlaws Sprint Car Series champion who makes select appearances on the WoO LMS during his time off from sprint car action, settled for third.

Leading WoO LMS Rookie of the Year candidate Brandon Overton of Evans, Ga., advanced from his 10th starting spot to finish fourth with series points leader Shane Clanton of Zebulon, Ga., rounding out the top five in a race slowed by three cautions.

The victory helped alleviate some of the frustration McCreadie has shoulder while struggling to find his rhythm on the WoO LMS this season. The breakthrough came at a particularly good time after McCreadie struggled to a 21st-place finish in Thursday night’s Wild West Tour opening round feature at Hibbing (Minn.) Raceway.

“It’s no secret we’ve struggled. I mean last night we got lapped in 20 laps,” said McCreadie, who notched just his seventh top five finish in 23 WoO LMS races this season. “It’s been a struggle, but we’ve worked hard. Thanks to (crew chief) Tommy Grecco and Sweeteners Plus and everybody that puts this whole package together.”

Besides McCreadie, Richards was one of the few drivers who could consistently make up ground using track’s tricky high groove. Sticking with the high line paid off as Richards drove his Valvoline-sponsored Rocket Chassis house car to his second consecutive runner-up finish.

“We were having fun out there,” Richards, the three-time WoO LMS champion, said of his charge toward the front. “I just had to commit to that top. If you hit it right you could gain a ton of speed on everybody, but if you missed a little bit you would bounce through the holes.

“Congrats to McCreadie – he was definitely the best car in the feature – and Donny. It was a good night for the Rocket cars.”

Making just his fifth WoO LMS appearance of the season, Schatz was solid all night in his Fargo Petro-sponsored Rocket. After qualifying sixth fastest, he finished second to Clanton in the third heat race to make the redraw and ran among the leaders throughout the main event. Using the track’s middle groove, he briefly challenged McCreadie for the lead following a lap 41- restart before fading in the final laps.

“I had an absolutely riot,” said Schatz, who made his fifth WoO LMS appearance of the season. “To be able to sniff the front in a World of Outlaws race in a Late Model is pretty cool. Whatever I was doing there to get through the middle, I thought ‘man, I think I can get him.’ But the next thing you know, I must have forgot what I was doing or something.”

Frank saw his hopes of a strong finish fade when he suffered a flat left-front tire with just a handful of laps remaining. But the veteran driver was able to wrestle his hampered machine to a 10th-place finish.

Strand was also denied a potential top-five finish when he suffered a flat tire of his own in the closing laps. He pulled to the infield and settled for 20th in the final rundown.

The first of the race’s three cautions appeared when Jordan Yaggy of Rochester, Minn., spun with three laps complete. Eric Wells of Hazard, Ky., slowed to cause a lap-35 yellow, and Rick Eckert of York, Pa., brought out the race’s final yellow flag when he slowed on lap 41.

World of Outlaws Late Model Series competitors take the next three nights off before returning to action with Round Three of the Wild West Tour at Gillette (Wyo.) Thunder Speedway on Tues., July 14. Black Hills Speedway in Rapid City, S.D., hosts Round Four of the tour on Wed., July 15, and Deer Creek Speedway in Spring Valley, Minn., hosts the finale on Sat., July 18.