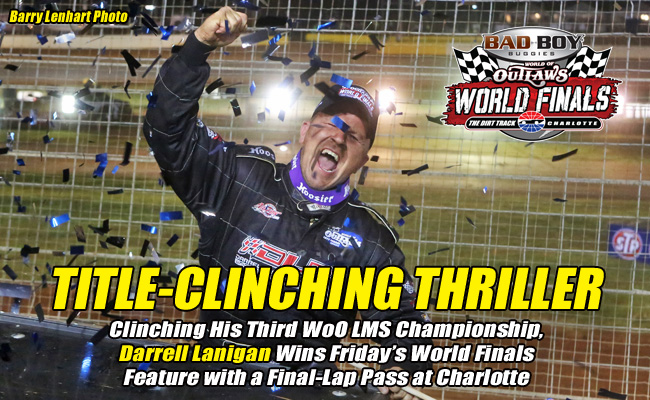 CONCORD, N.C. – Nov. 7, 2014 – Darrell Lanigan didn’t need to complete a dramatic final-lap pass to clinch his third World of Outlaws Late Model Series championship Friday night at The Dirt Track at Charlotte, but he wasn’t only racing for a championship.

Held at bay for the majority of Friday’s 50-lap WoO LMS A-Main, Lanigan, 44, of Union, Ky., used a determined charge into the finale corner to sweep around leader Chris Madden in traffic on his way to a thrilling victory at one of the year’s biggest Dirt Late Model events. Adding to an already illustrious season, Lanigan earned a $12,650 payday in the opening round of Charlotte’s eighth annual Bad Boy Buggies World of Outlaws World Finals.

Lanigan, who was virtually assured of claiming the WoO LMS championship just by entering the national tour’s season-ending doubleheader at Charlotte, officially clinched the 2014 series championship with his record 17th WoO LMS victory of the season.

“This is unbelievable to come here and win in front of all these people,” an excited Lanigan told the near-capacity crowd during his Victory Lane interview. “Helluva crowd here even with the cold weather. I want to thank everybody in the stands. I hope we put on a good show for you guys because I’m telling you I drove my butt off.”

Madden of Gray Court, S.C., settled for second, finishing a scant 0.088 seconds behind Lanigan after leading laps 2-49. Scott Bloomquist of Mooresburg, Tenn., finished just behind Lanigan and Madden in the third position with Jimmy Owens of Newport, Tenn., also just behind in the fourth spot. Polesitter Dennis Erb Jr. of Carpentersville, Ill., finished fifth after leading the race’s opening lap.

Lanigan had to work hard for his 70th-career WoO LMS victory. He used the track’s high groove to advance his Club 29 Race Car from fourth to second by lap 19 and began to challenge Madden for the lead before the halfway point.

Lanigan made multiple charges to pull alongside the low-running Madden, but each attempt to pass was thwarted as Madden pulled his Bloomquist Race Car ahead and edged away on longer green-flag runs.

Lanigan’s chance at winning appeared to be slipping away when a poor restart on lap 36 dropped him back to third as Madden opened another comfortable lead. But Lanigan remained committed to the high side of the track and rode it back into the second spot just a few laps later.

Lanigan closed Madden’s lead slightly late in the race, but he wasn’t quite close enough to seriously challenge until Madden caught traffic as he headed for the white flag. Lanigan quickly pounced on the opportunity. He caught Madden in turns one and two, pulled alongside for the lead down the back straightaway, and charged ahead through the final corner to nose out front of Madden at the finish line.

“We were a little harder on tires, so I knew I had to stay up on that top and keep it going,” said Lanigan, who claimed his second-career Charlotte victory. “I didn’t get a good start on that last restart. I fell back third, but we got going there on the top and got my momentum going. We caught that lapped traffic again and it helped me on that last lap.”

Just as Lanigan remained committed to the top groove for the entire race, Madden was steadfast in his line around the bottom groove. Madden’s commitment to the bottom appeared to be the correct choice until slower traffic became a factor in the closing laps and prevented the standout Palmetto State driver from claiming what would have been his ninth-career WoO LMS victory.

“We were good enough to win tonight,” a dejected Madden said after being denied a second-career World Finals victory. “The bottom wasn’t the place to be in lapped traffic. It opened up the door for the guys using another line and we got beat.”

Don O’Neal of Martinsville, Ind., finished sixth, while Eric Wells of Hazard, Ky., used a seventh-place finish to overtake Chub Frank of Bear Lake, Pa., for fifth in the WoO LMS points standings. Tim McCreadie of Watertown, N.Y., was eighth after charging into the top five early in the race while 16th-starting Dale McDowell of Chickamauga, Ga., and 21st-starting Bub McCool of Vicksburg, Miss., rounded out the top 10 finishers.

The race was slowed by four cautions. The first appeared with nine laps complete when WoO LMS rookie Chase Junghans of Manhattan, Kan., slowed on the back straightaway. A lap-14 yellow flag appeared when Jason Feger slowed from the fourth spot after using a high-side rally to charge from 10th to second early in the race. The pace again slowed on lap 26 when Frank slowed with a flat tire.

The fourth and final caution was the most dramatic incident as it nearly took out the leader. Madden tangled with Frank as he attempted to put him down a lap, sending both cars up the racetrack. Both Lanigan and Owens drove by Madden in a three-wide move while Madden worked to correct his machine. But Frank slowed to a stop, bringing out the caution and allowing Madden to remain the leader.

Lanigan’s dramatic victory came in front of a packed grandstand at Charlotte’s 4/10-mile oval as the track hosted the first of back-to-back tripleheaders featuring the WoO LMS, the World of Outlaws STP Sprint Cars and the Super DIRTcar Series Big-Block Modifieds. The World Finals conclude on Saturday with another tripleheader featuring the season finale for all three divisions. Gates open at 3 p.m., hot laps are scheduled to start at 4 p.m. and racing is set to begin at 5 p.m.

Rookie of the Year Standings as of Nov. 7 (36 A-Mains completed; best 25 races counted)