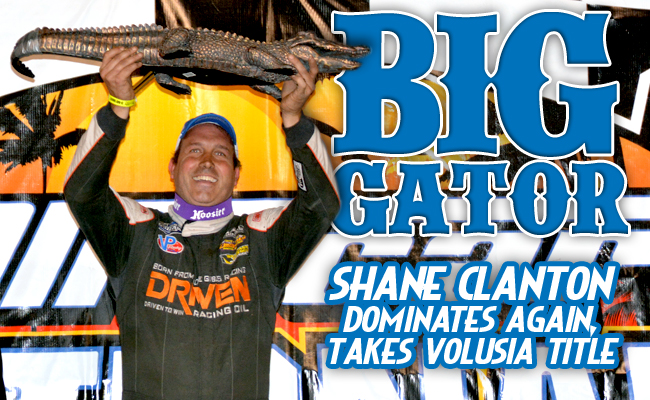 The utter domination solidifies Clanton’s recovery from a dismal 2014 season the saw the 39-year-old racer go winless on the WoO LMS for the first time since the national tour was restarted in 2004. Looking for his first ever WoO LMS championship, Clanton has firmly established himself as the 2015 title favorite as he leaves Florida with a commanding 90-point lead over defending series champion Darrell Lanigan of Union, Ky.

“That was a good ole Georgia ass-kickin’ right there,” said Clanton whose early-season trip through Georgia and Florida included five victories overall with nine top-five finishes in 11 events between three tracks. “We were by far the class of the field. I don’t give a damn what anybody says. We worked our ass off all winter long. This feels good.”

Clanton became the first driver in the 44-year history of Volusia’s annual week-long stretch of February Late Model racing to claim four victories in the same year. The unprecedented performance began with a DIRTcar Late Model-sanctioned victory in Monday’s opener and concluded with a sweep of the week’s three WoO LMS programs.

The four triumphs and a fifth-place finish in Wednesday’s DIRTcar-sanctioned event lifted Clanton to the DIRTcar Nationals overall points championship, earning the WoO LMS veteran his first Big Gator trophy to go along with his four smaller Gator trophies earned throughout the week.

Driving a Clements-powered Capital Race Car owned by his father-in-law Ron Davies, Clanton moved forward from his sixth starting spot and settled in behind polesitter Tim McCreadie of Watertown, N.Y., in the early going.

Clanton was content to ride behind McCreadie until the race’s waning laps, but a hard-charging Owens forced him to abandon those plans.

Owens briefly took the second spot from Clanton on a lap-24 restart, but Clanton quickly took the spot back and went to work on McCreadie. After Clanton’s lap-29 pass for the lead was nullified by a caution, he took advantage of McCreadie’s lap-32 slip in turns three and four to race ahead for good.

Clanton turned back brief challenges from Owens and Bloomquist on the race’s final two restarts and pulled away to the 24th WoO LMS victory of his career.

“I drove me heart out tonight just biding my time and making the right moves at the right time,” said Clanton, who has already equaled his winningest WoO LMS seasons of 2008 and 2013. “The pace tonight was just unbelievably fast. I was afraid I was gonna hurt my right-rear tire, so I just paced myself the first 15 or 20 laps. Owens got up to second there and I knew I had to go then. I just took the right moves and got back by him and made the right move to get by McCreadie.”

Owens appeared to be the class of the field when he charged by Clanton on lap 24, but his bid to claim his first career DIRTcar Nationals victory fell short to Clanton’s domination.

“I didn’t want to see them restarts,” said Owens, who drove his Brian Rowland-owned Club 29 machine to his first top five in three starts at Volusia this week. “Shane’s been in a different zip code all week, so I consider this a win instead of second.”

Bloomquist was the only driver besides Clanton to win a Late Model feature at this year’s DIRTcar Nationals with his DIRTcar-sanctioned triumph on Wednesday night. But his bid to drive his Sweet-Bloomquist Race Car to a second victory was denied.

“Shane really just had everybody covered tonight and he was good all week,” Bloomquist said. “We know when we get beat, and we got beat this weekend.”

McCreadie slid back to sixth at the finish with Kent Robinson of Bloomington, Ind., seventh. Former WoO LMS Rookie of the Year Eric Wells of Hazard, Ky., was eighth at the finish with fellow series regulars Chase Junghans of Manhattan, Kan., and Boom Briggs of Bear Lake, Pa., rounding out the top 10.

The race was slowed by six cautions, all for either flat tires or mechanical woes. The race’s first yellow flag came just after second-running Frank Heckenast Jr. of Frankfort, Ill., clipped the rear of Walker Arthur’s slowing machine. The contact caused significant damage to the left-front of the 2014 Rookie of the Year’s car, eventually forcing him out of the race.

Other potential contenders to fall by the wayside included Billy Moyer of Batesville, Ark., who slowed from the fourth position with apparent engine troubles on lap 29. Mechanical issues also struck three-time WoO LMS champion Josh Richards of Shinnston, W.Va., ending his run from 18th to seventh on lap 38.

Saturday’s event concluded the WoO LMS tour’s stretch of seven events in Georgia and Florida to open the season. The series returns to action March 20-21 with a doubleheader weekend at Kentucky Lake Motor Speedway in Calvert City, Ky., and I-30 Speedway in Little Rock, Ark.