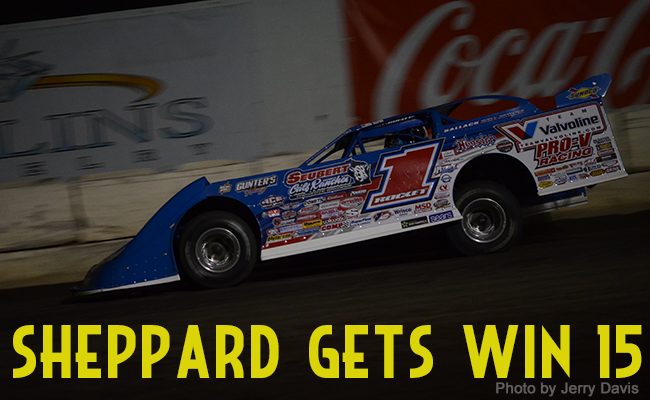 KANSAS CITY, KS— Sept. 22, 2017—Brandon Sheppard secured his 15th win of the 2017 season at Lakeside Speedway after a pass for the lead on lap 22 of the 50-lap feature. Once Sheppard got to the front of the pack from his fifth position start, there was no looking back for the Rocket Chassis No.1 as he created 7.778 seconds between him and Shane Clanton who finished second.

“Putting the hard tires on this thing helped us a little bit tonight,” said Sheppard. “We were a little bit tight early and I think the tires were a little bit too soft for the way that this track was. This track was pretty hard on the soft tires so the hard ones worked really good. Mark [Richards] made all of the right decisions on the car and Dan [White], Austin [Hargrove] and Joel [Rogers] work really hard and it’s a heck of a team we have here. I can’t thank these guys enough.”

Clanton’s second place finish was one spot behind where he finished during the World of Outlaws Craftsman® Late Model Series last visit to the 4/10-mile speedway in 2007. One decade later and Clanton still remains a threat to the podium at the Kansas City semi-banked oval.

Clanton found himself battling with Brent Larson for majority of the race. On a lap 24 restart, after a caution fell for Tyler Erb with a right-rear flat, Clanton was able to pull off the pass for second but Larson quickly regained control. Clanton secured his second-place finish on lap 40 from Larson.

“I know we had a second-place car there and I know that Brandon was a little bit better in lapped traffic and passing the leader there but we’re going to work on it a little bit more and I think we’re going in the right direction and hopefully just compete with them,” said Clanton

Larson held the lead for 22 laps before being passed by Sheppard on lap 22, then by Clanton on lap 24 and again on lap 40. Moran was the next car to find his way to Larson’s bumper and then find his way around on lap 46. Larson settled for a fifth-place finish with Chris Madden sneaking by to make a near last lap pass for fourth.

“I definitely had to fight for that one,” said Moran. “I got shuffled back to eighth or ninth on that start and was kind of just climbing the rest of the way…  The 25 car is the man I’m trying to catch so it’s not good when he finishes in front of me but just got to keep on digging and keep on grinding and hopefully we can get to the rest of this year with top-fives.”

Only 54 points stand between Clanton in third and Moran in fourth in the points chase.