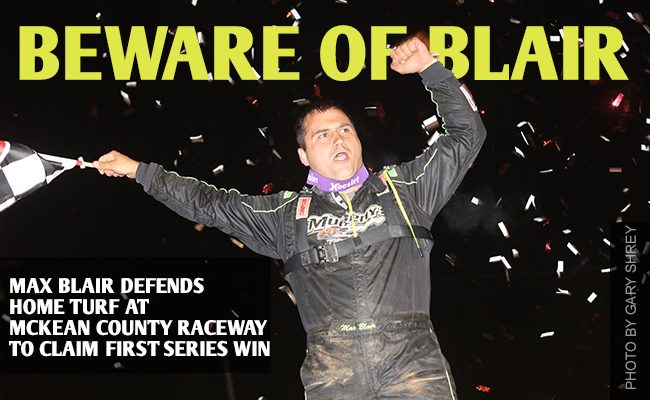 Devin Moran and Brandon Sheppard round out the podium

The Pennsylvania-native was joined in Victory Lane by a fan club of family and friends who rushed the track for the celebration. After embracing the moment under a shower of confetti, Blair was seemingly at a loss for words trying to describe his first Outlaw win.

“I never would’ve dreamed this would have happened to me,” said Blair. “I don’t even know what to say. I am so pumped up. We destroyed our car a couple of weeks ago and we’ve been working really hard this week to get this thing turned around and ready. We were pretty excited to come here tonight but I didn’t really know what to expect. I can’t believe it. I really can’t.”

Blair started second in the feature and was able to pass pole-sitter, Morgan Bagley, on lap 16 for the lead. The pair battled earlier in the evening during the heat race but at that time Bagley was able to fend off Blair’s charges to win his first heat of the season.

Devin Moran was next to find his way to Bagley’s door and then around him by lap 31. Moran then showed how powerful his Tye Twarog/ DMR machine was by steadily reeling in leader, Blair.

“This is our first time here and to get a top-five is pretty good,” said Moran. “We have to keep working. I feel like we had the best car out there all night but Max did a good job. I have to give him props.”

By the time the checkers fell, Blair only held .987 over Moran. The two had the fastest cars during qualifying followed by Brandon Sheppard who coincidentally rounded out the podium.

“For starting fifth on a track that is pretty hard to pass on we will take a top three tonight and go on to Lernerville where we have three nights there,” said Sheppard. “That seems like a pretty fun track.

The 11th Annual Firecracker 100 at Lernerville Speedway is the next stop for the World of Outlaws Craftsman Late Model Series. The event is a three day show from June 22-24. Tickets are still available here.