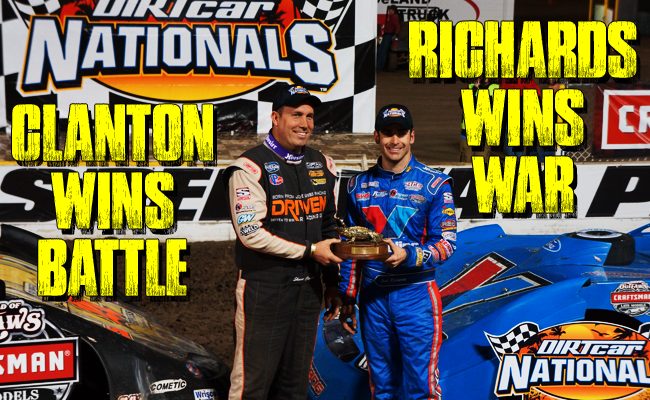 BARBERVILLE, Fla. – Feb. 20, 2016 – One night after being involved in a multi-car accident, Shane Clanton had to battle Josh Richards and a near photo finish with Scott Bloomquist to take the World of Outlaws Craftsman® Late Model Series win on Friday night during the finale of the DIRTcar Nationals at Volusia Speedway Park.

Richards led 45 of 50 laps but came up just short of the weekend sweep en route to capturing the Big Gator awarded to the week’s overall points champion.

Richards dominated from the beginning of the night in his Valvoline/Rocket Chasses No. 1, as he posted the second fastest time in qualifying and then led flag-to-flag in his heat to place himself in the redraw for the feature.

Just as he did Thursday night, Richards matched his speed with luck as he drew the top starting position for the $10,000 to-win feature.

Richards easily rocketed to an early lead over second place starter Brian Shirley in the Arnie Ranta/Longhorn Chassis No. 3s. Shirley settled into second before he lost the position to Jonathan Davenport who drove his Baird Transport/Elite Concrete No. 6 from his sixth starting position into the top two by lap six.

Davenport, who has finished third and second twice so far this week, looked to have the car to contend with Richards for the win but faded near the halfway point of the race, when Clanton charged his way past him for second.

CLICK HERE TO WATCH HIGHLIGHTS FROM THE FINALE OF DIRTCAR NATIONALS

Clanton had piloted his Weldbank Energy/Capital Chassis No. 25 from the inside of the third row to get around Davenport, but was four seconds behind Richards for the lead with fewer than 25 laps remaining.

Richards looked to be cruising to his third win in-a-row and fourth out of five nights at the DIRTcar Nationals, but within 10 laps Clanton had reeled in the leader and was all over Richards’ back bumper.

Clanton and Richards battled side-by-side for the top spot as the they diced through lapped traffic. With the two leaders stuck in a heated fight for the lead, Scott Bloomquist snuck his way into the third position and into the battle for the victory.

With only seven laps remaining, Richards, Clanton and Bloomquist were separated by a matter of car lengths, setting up a shootout for the feature victory.

Clanton used a lapped car to pick Richards, as he made his move to the leaders outside and captured the lead with five laps left. Richards then fell victim to Bloomquist who muscled his way into the runner-up position.

The Zebulon, Ga. native looked to have the race wrapped up, with only a handful of laps left, as he cruised to a second and a half lead. Bloomquist never quit, and on the white flag lap, the second place driver had caught the leader.

Clanton, not realizing Bloomquist was as close as he was, eased off the accelerator just enough to give Bloomquist a window to his inside coming to the checkered flag.

Bloomquist powered his way off the final corner, pulling even with Clanton as the leader began celebrating his victory with one hand out the window. Bloomquist came up just short of capturing the win as Clanton nosed him at the line by a fender.

“We just bided our time early in the race,” said Clanton, the defending series champion. “We started catching lapped cars and I could finally see Josh [Richards] again, then when I finally got past [Jonathan] Davenport, I had a clean racetrack where I could do what I wanted to do. We then caught [and passed] Josh, who was having trouble getting through lapped traffic and putting his car where he wanted to.

“I’ve had such a terrible week this week. To win a race it was just relief that came across my body and I started celebrating not knowing Scott [Bloomquist] was that close. If I would have known that I wouldn’t have [started celebrating] when I did. But it’s a testament of all the hard work we have done the past two days, from blowing a motor one night to having the car in a million pieces and almost upside down last night, then coming back and winning tonight.”

“We thought it was a 60-lap race,” Bloomquist said. “I had a number of people tell me they thought it was 60 laps, but it’s just the way it goes. We might’ve been able to pick up the pace a little more, but I saw we were on lap 49, then saw the white flag the next lap and thought ‘we better get it on now’. So I got past Josh and got to Clanton, but should’ve picked up the pace a little sooner.”

Capturing his second DIRTcar Nationals championship, Richards only needed to start the A-main to win the prestigious Big Gator. Not only did Richards start the A-main but he dominated the race and finished third.

“Winning this means everything to us,” the Shinnston, W.Va.-native said. “We worked hard all winter and then to have a speed weeks like we did, it was just unbelievable.

“I think our worst finish was seventh a couple of times, but most of the time we were running up front and battling for wins, so that’s all we can ask for. We had another great car again tonight, but sometimes when you’re leading you can be a sitting duck. But we can’t be dissatisfied with our trip, we had a phenomenal trip, and it was awesome.”

Richards opened up a large lead of over four seconds at one point before Clanton took over the second position. Once Clanton made his way into the runner-up position he started taking large chunks out of the deficit every lap.

“It didn’t surprise me when he caught us,” Richards said. “He was really good rolling the middle here last year, and I was on the bottom just trying to conserve a little. I should’ve tried to move up a little and try harder to make it work, but Shane was really good and he turned a bad night around last night into a win tonight.

“I’m going to spend some time at home, but we’re going to continue to work and get ready for the rest of the swing. It’s going to be nice to be home – it’s been a long month but it’s been a lot of fun. We’re going to take a break for a few days and then get back to work.”