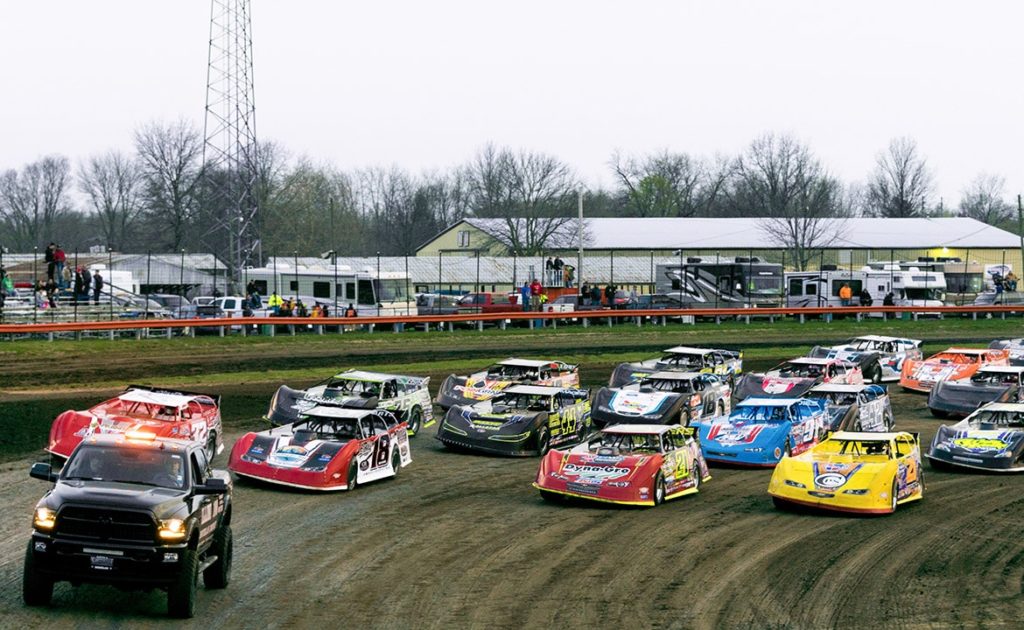 FARMER CITY, IL — Local and regional racers have their eyes set on a huge prize this weekend as they try to knock off the World of Outlaws Morton Buildings Late Model Series stars at Farmer City Raceway in the two-day.

One of the Illinois fan favorites is longtime Dirt Late Model racer Kevin Weaver in the Jimmy John’s B12 car. Weaver’s first race took place at Farmer City, and he’s since turned countless laps on the quarter-mile dirt oval against a couple generations of stellar competition. With all of his 35+ years of experience, it seems no driver would know Farmer City better than Weaver himself. And he agreed that no opponents provide more competition than those aboard the World of Outlaws roster.

“It’s like I always tell people, you’ll never get better until you run against the best,” Weaver said. “Having [the Outlaws] come in and seeing exactly where you stack up against them gives you an indication of what you need to work on.”

Since the event’s inception in 2008, no strictly weekly racer from Illinois has ever managed to capture the Illini 100’s $15,000 top prize. All six past winners have either been part of a national tour at some point in their career or do not make their home in Illinois. Like many others, Weaver will be part of the local gang trying to change all of that this year. And how special it would be for the now-two-time Farmer City Dirt Late Model track champion to break that barrier.

“It would be awesome to outrun the best that’s out there,” Weaver said. “Anything in the top-five, I’d be tickled to death with this weekend.”

Two newly-signed drivers to the full-time World of Outlaws roster will also be in attendance this weekend — Brian Shirley, of Chatham, IL, and Brandon Overton, of Evans, GA.

Hailing directly from the state of Illinois, Shirley is certainly no stranger to Farmer City or the World of Outlaws roster. In 2016, he competed in his first full-time season with the Outlaws and scored three wins, eight top-fives and 19 top-10s across 40 races, good enough for ninth-place in the points championship.

In 2019, Shirley and car owner Bob Cullen have signed on as full-time competitors once again to chase the Series crown. Currently, the #3s sits seventh in points with two top-fives and four top-10s through the first eight races. All things considered, Shirley’s ready to get back on tour and have a great showing at Farmer City.

“We’ve had a solid start to the year so far,” Shirley said. “Anytime the Outlaws come into town, it’s always tough competition. But now that we’re doing the full-time deal, that makes us one of them so I’m definitely looking forward to coming back home and racing in front of the fans that know me best.”

The Rum Runner Racing ride of Brandon Overton has also signed onto the full-time roster, marking the Schaeffer’s Racing Oil #2’s second venture aboard the World of Outlaws tour. His predecessor, Joey Coulter, also competed in the #2 for the Rookie of Year title back in 2016.

As of this week, the 2015 Rookie of the Year sits eighth in Series points with a win in the season opener back in February at Screven Motor Speedway. With that hot start under his belt, Overton looks to use his experience behind the wheel on a national tour to his advantage this year, in another quest for the Series title.

Overton’s run in the 2015 Illini 100 might have been his best, qualifying second quick overall right behind Weaver and going on to win his Heat Race before winding up 15th in the Feature. He’s one of four drivers with a victory on the tour this season.

THIS WEEKEND AT A GLANCE
WHEN & WHERE
Thursday, Friday & Saturday, April 4-6 at Farmer City Raceway in Farmer City, IL.

TICKETS
Tickets can be purchased in advance through Wednesday by going to WorldofOutlaws.com/tix or by calling 844-DIRT-TIX. Tickets will be available at the track starting Thursday.

1/4-MILE WINNERS
There has been one race on a 1/4-mile track so far this year at the Duck River Raceway Park in Lewisburg, TN. Brandon Sheppard was the winner on Friday, March 22.

AROUND THE TURN
The World of Outlaws Morton Buildings Late Model Series next heads to Cherokee Speedway in Gaffney, SC on Friday, May 3 and then to Lavonia Speedway in Lavonia, GA on Saturday, May 4.