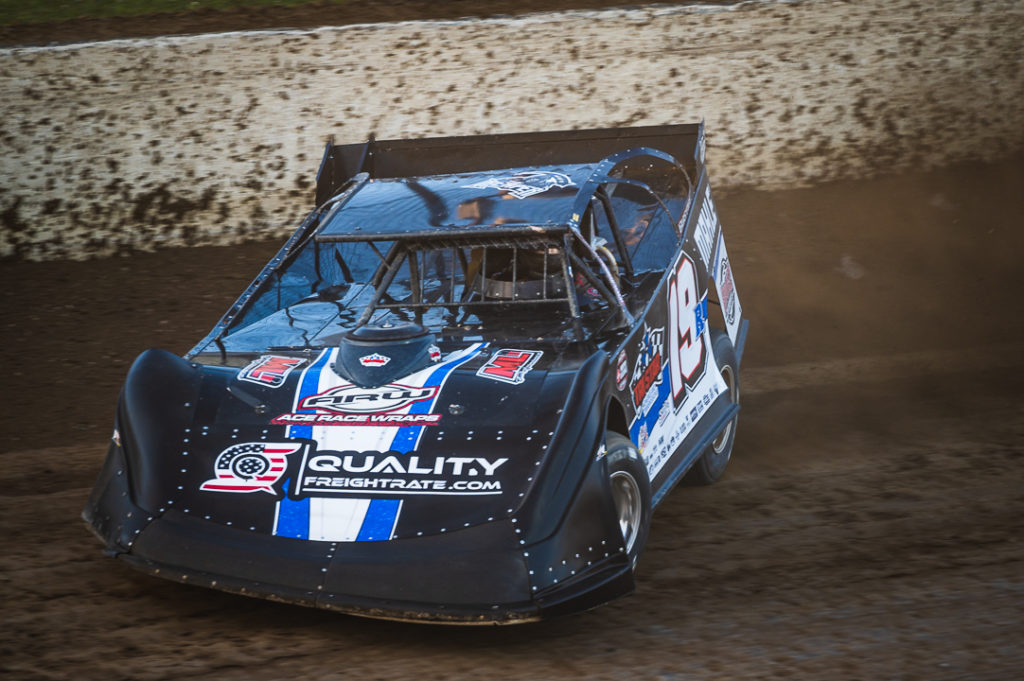 “We can be like they are.” That’s a lyric you’ll find in Blue Oyster Cult’s famous song “Don’t Fear the Reaper.”

Ryan Gustin, aka “The Reaper,” proved he can be like the prime contenders at Eldora Speedway Friday night, finishing second in his preliminary Feature at the DIRTcar sanctioned 26th annual Dirt Late Model Dream.

Gustin started on the pole of his 25-lap Feature and led the first nine circuits. That’s when Feature winner Brandon Overton made the pass for the win on the bottom of Turn 3.

Even though he had to settle for second, Gustin was excited about grabbing his first Eldora podium.

“It feels awesome just to lead some laps in front of this crowd,” Gustin said. “It’s the biggest race of the year and as long as we get through the Heat Race, and don’t crash or anything I think we’ll be alright [Saturday.]”

Gustin knows he proved something Friday night, especially after finishing behind Overton, who won Thursday’s $127,000-to-win Dream and hasn’t lost a Feature this week at the famed half-mile.

“Overton is just the class of the field here, that’s all there is to it,” Gustin said. “But we’re gaining on it step by step, and we’re definitely getting there that’s for sure.”

In the second Feature, the top two drivers in Series points Brandon Sheppard and Chris Madden both scored top-10 finishes.

The Three-time and defending Series champion finished eighth while trying to dial in a setup for [Saturday’s] race.

“We tried a few things tonight to see if we can get better for the race tomorrow and it didn’t help us any,” Sheppard said. “We just have to be a little bit better, early in the night our program is pretty good, and we can qualify in the Heat Race really good. We’re just going to work on this thing and get a little better for [Saturday.]

Chris Madden finished right behind Sheppard in ninth. The Gray Court, SC driver bounced back, after crashing during his B-Feature Thursday night.

“Smokey” felt he had a good car, and wished the race was longer than 25-laps.

“I kind of wish we had the 100-lapper tonight, because I felt really good,” Madden said. “We were a little bit slow on restarts, but we seem to have a pretty good car right now to run long distance.”

Tyler Bruening was also in the second Feature and finished 11th.

The World of Outlaws drivers return to Eldora Speedway Saturday, for the final night of the 26th Dirt Late Model Dream. One of the tour regulars could win $126,000 if they reach Eldora’s illustrious Victory Lane.