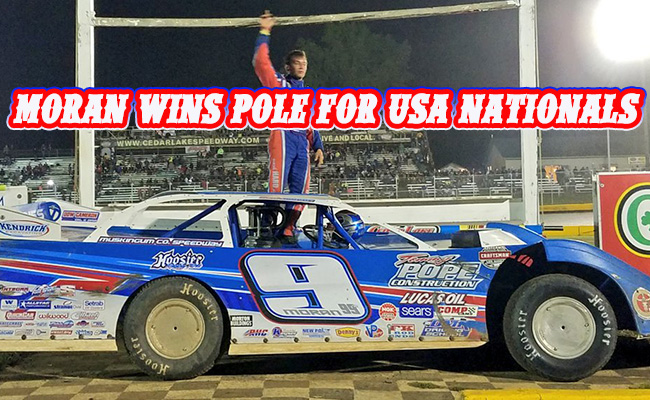 Devin Moran Will Start on the Pole for $50,000-to-Win USA Nationals at Cedar Lake Speedway

NEW RICHMOND, WI — Aug. 3, 2018 — The World of Outlaws Craftsman® Late Model Series continued the Week of Wisconsin on Friday, August 3rd at Cedar Lake Speedway (WI). It was Qualifying night featuring the unique Double Heat Races format. Passing points were accumulated based on positions gained in the two heat races each competitor competed in during the night.

Then, the top 16 drivers with the most passing points were locked into the Feature on Saturday. Then the top eight (8) drivers within the top 16 raced in the USA Nationals Dash to compete for starting spots in the top four rows of the $50,000 to Win Sears Craftsman Feature on Saturday at the 3/8s-mile high-banked dirt oval located just across the Minnesota / Wisconsin state line and northeast of Minneapolis, MN in New Richmond, WI.

The top eight drivers after the two sets of Heat Races would line up for the USA Nationals Dash to determine the first eight starting spots in the 100-lap Feature on Saturday. By virtue of their points accumulated, Jimmy Owens and Devin Moran started on the front row and it would be Owens leading the first lap until Moran motored around on lap two. Moran would slowly pull away from Owens and the rest of the field and go on to win the Dash, earning the right to start on the pole in the 100-Lap, $50,000-to-win Sears Craftsman Feature on Saturday, August 4th.

Owens finished second and will start on the outside of the front row while defending series champion, Brandon Sheppard, 2018 DIRTcar Summer Nationals Hell Tour Champion, Brian Shirley, 2015 USA Nationals winner, Jonathan Davenport, Mike Marlar, Ricky Weiss and Shannon Babb finished off the field and will start in that order within the first four rows.

Winning Heat Races under the unique Double Heats Format where: Jason Rauen, current Series points leader Chris Madden, Babb, Kyle Bronson, Shirley, Dale McDowell, Owens, Sheppard, Mars and Erb. Despite winning Heat Races, Rauen, Madden, Bronson and McDowell will all have to come through one of the two Last Chance Showdowns, which will be 15-Laps each and taking the top three out of each. McDowell and Tyler Bruening start on the front row of the first LCS while 2014 Series Rookie of the Year Frank Heckenast Jr., and Jason Feger start on the front row of the second LCS.

Saturday, August 4th, is the headliner night of the 31st annual USA Nationals. The night will start with two Last Chance Showdowns followed by the $50,000-to-win USA Nationals that will wrap up the Week in Wisconsin road trip. Added to the program will be the FANS Fund Dash

There are 10 other drivers who have at least one victory with O’Neal, Jimmy Owens, 2006 Series Champion Tim McCreadie, three-time Series Champion Darrell Lanigan, 2004 Series Champion Scott Bloomquist and Dale McDowell all getting their wins in the USA Nationals. Madden, Jimmy Mars, Donnie Moran and Rick Egersdorf have all scored victories at Cedar Lake as well.