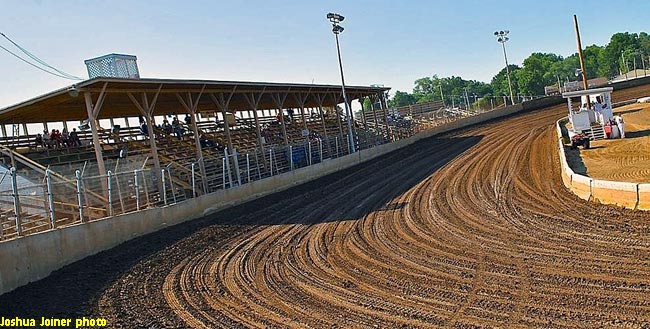 NO PLACE LIKE IT: Jason Feger has a suggestion for people planning to attend the inaugural World of Outlaws Late Model Series event at Belle-Clair Speedway in Belleville, Ill., on Friday night (Sept. 14).

“You need to get there early and see everybody’s face when they look at the track,” said Feger, a 34-year-old resident of Bloomington, Ill., who has entered special shows at Belle-Clair for several seasons. “It’s gonna be pretty interesting.”

Indeed, the one-fifth-mile bullring – the smallest track ever to appear on the WoO LMS schedule – will elicit some wide-eyed reactions from the national tour’s regulars. Just one of the circuit’s 11 current travelers has raced at Belle-Clair – and that driver (rookie Kent Robinson of Bloomington, Ind.) has only run a UMP Modified there.

“You ain’t seen nothing until you’ve seen that place,” said Feger. “It is tiny, definitely the smallest track I’ve ever been on. The size is definitely a big equalizer, so I could see a first-time Outlaw winner on Friday night.”

A former DIRTcar Summer Nationals and UMP national champion, Feger will enter Friday’s $12,000-to-win/$1,000-to-start ‘Photobilly 50’ – the richest race in the history of the track – less than three months removed from earning his first career win at Belle-Clair in a Summer Nationals event. It was a very satisfying triumph for the approachable driver known as the ‘Highside Hustler.’

“The Summer Nationals this year was definitely the best race we’ve ever had there,” said Feger, who won three features en route to a fourth-place finish in the 2012 Summer Nationals points standings. “We’ve had some trouble figuring the place out in the past, but we were good that night. I was able to win it on softer tires than any of the times I was there before because they reworked the track (before the A-Main).”

Thanks to his June success at Belle-Clair, Feger feels that he’s ready to challenge the invading World of Outlaws regulars in a highly anticipated event that is being billed as the most unique on the tour’s 2012 schedule.

“It takes a different mentality to race there,” summarized Feger, who is coming off a solid fifth-place finish in last Saturday night’s prestigious DIRTcar UMP-sanctioned World 100 at Eldora Speedway in Rossburg, Ohio. “It’s a tough place. It’s tight quarters. You definitely need to have some give-and-take there.

“Physically, it’s similar in size to (one-fifth-mile) Macon (Speedway), but it has an infield wall so it races smaller, if that makes sense. Macon doesn’t have an infield wall, is a little bit rounder, has more banking and more traction in the dirt, so you carry more speed into the corners. That infield wall changes things at Belleville, makes it more challenging.

“Man, it’s gonna be interesting,” he added. “Starting 24 cars, it won’t take long at all to get in lapped traffic – and with the quality of cars that are gonna be there you’re gonna be lapping high-caliber guys, which will make it that much tougher.”

Feger, who has qualified for the A-Main in all 10 of his WoO LMS appearances this season and accumulated five top-10 finishes, would relish a victory in Friday’s event – but not merely because it would give him a sweep of the track’s two major events this season or even because it would bring him a sweet $12,000 payday. He would like to grab the race’s checkered flag because of the man it honors: well-known St. Louis-area photographer Charles Haffer Jr. (aka ‘Photobilly’), who lost his life on Aug. 7 at the age of 44 in a tragic Iowa highway accident while traveling to a race.

“I think anybody from around here in Illinois had to know him,” Feger said of ‘Photobilly.’ “He actually was probably my favorite photographer. He’d take your picture, and he’d always bring you the picture the next time he saw you.

“He was a super nice guy. He would talk to everybody before every race and tell you, ‘Good job’ after it. He truly loved racing a ton – it wasn’t just a hobby for him, it was his life.”

As part of Friday’s memorial for Haffer, who served as Belle-Clair’s track photographer, a specially-designed ‘Photobilly 50’ t-shirt will be on sale with all proceeds going to Haffer’s daughter, Danielle.

ACTION TRACK: If there’s one near-certainty about the $10,000-to-win/$1,000-to-start Pepsi Nationals on Saturday night (Sept. 15) at Federated Auto Parts Raceway at I-55 in Pevely, Mo., it’s that fans can expect a memorable, down-to-the-wire shootout for the 55-lap race’s top prize.

History is a great indicator of what’s in store at the high-banked, one-third-mile oval promoted by NASCAR veteran Ken Schrader and Ray Marler. There have been five WoO LMS events contested at I-55 since 2005 and only one – last year’s Pepsi Nationals won by two-time tour champion Josh Richards of Shinnston, W.Va. – did not feature a rip-roarin’, late-race battle for the checkered flag.

* In 2005, Billy Moyer of Batesville, Ark., grabbed the lead from his protégé Shannon Babb of Moweaqua, Ill., late in the distance – just after Babb’s car spewed smoke due to a busted power-steering hose that left him wrestling his mount for the remainder of the race – and held on for a big victory on his road to winning that year’s WoO LMS title.

* Clint Smith of Senoia, Ga., was triumphant in 2007 after surviving a restart with three laps remaining that allowed Babb and Randy Korte of Highland, Ill., to make stirring bids for the lead.

* Babb gained a dose of redemption on Moyer in 2010, outdueling the legendary driver to take the lead for the final time on lap 48 of the 55-lapper. Babb beat Moyer to the checkered flag by .411 of a second in a race that many observers ranked as one of the best the dirt Late Model division produced in ’10.

CAN HE BREAK THROUGH?: WoO LMS points leader Darrell Lanigan of Union, Ky., has already won a record 14 tour races at 14 different tracks in 12 states and one Canadian province this season. He’d love to add Federated Auto Parts Raceway at I-55 to his list of conquered speedways – not only for this year, but for his career.

With Lanigan holding a 172-point lead over Rick Eckert of York, Pa., entering this weekend’s action, he’s rolling toward his second career championship. He currently needs only to average a 12th-place finish over the final seven races of 2012 to clinch the crown.

IN HIS BACKYARD: No one who has been on the road with the WoO LMS this season is more excited about Friday night’s ‘Photobilly 50’ at Belle-Clair than Jason Quirin, a crewman on Kent Robinson’s team.

“The place is two miles from my house,” said Quirin, who lives in Belleville, Ill. “And my driver has actually raced there, so maybe we’ll have a little advantage.”

A quality group of drivers have announced plans to battle the Outlaws in both events, including Billy Moyer and his son, Billy Moyer Jr.; Babb; Dennis Erb Jr. of Carpentersville, Ill.; Brandon Sheppard of New Berlin, Ill., who will drive the Rocket Chassis house car; Michael Kloos of Trenton, Ill.; Jack Sullivan of Greenbrier, Ark., who returns to the WoO LMS for the first time since dropping off the circuit as a regular in mid-August; and Wendell Wallance of Batesville, Ark.

Racers planning to compete only at Belle-Clair include Feger, 2012 Summer Nationals champion Brian Shirley of Chatham, Ill., defending DIRTcar UMP national titlist Ryan Unzicker of El Paso, Ill., and Mike Spatola of Manhattan, Ill., while last week’s World 100 winner Brian Birkhofer of Muscatine, Iowa, is among those expected to join the action at I-55.

RUBBER: Both the Belle-Clair and Federated Auto Parts Speedway at I-55 WoO LMS events will be contested under the DIRTcar Hoosier tire rule. Three compounds – LM 20, 30 and 40 – will be permitted for use.

FOR THE DRIVERS, FOR THE FANS: Pre-race ‘feeds’ for the drivers are planned for both Belle-Clair (2 p.m.) and I-55 (noon), and WoO LMS stars are scheduled to sign autographs in the grandstand area at Belle-Clair on Friday at 5 p.m.

Fri., Sept. 14, at Belle-Clair Speedway in Belleville, Ill.: The Will-Call Window (for advance ticket buyers who need to pick up tickets) and the general-admission ticket booth will open at 3 p.m. CT. All pit passes will be sold at the rear pit shack, which also opens at 3 p.m.

While ticket sales will begin at 3 p.m., the spectator gates will not open until 5 p.m. At that time fans will be allowed into the speedway to secure their seats in the grandstands. Fans will not be permitted to put down blankets before the official opening of the gates; officials will sweep the grandstands prior to the 5 p.m. opening and remove any blankets already in the bleachers.

General admission is $30 with children 12-and-under admitted free of charge, and pit passes will be $30 for DIRTcar members and $35 for non-members. A special pit admission deal is available to DIRTcar UMP Modified and Sportsman teams — $25 per pit passes for a driver and two pit crew members.

A raindate of Sunday evening (Sept. 16) has been established for Belle-Clair’s event.

Belle-Clair Speedway is located in Belleville, Ill., on the St. Clair County Fairgrounds, less than 40 minutes from St. Louis and just 50 minutes from Federated Auto Parts Raceway at I-55.

General admission is $30 and reserved seats are $32. Children 12-and-under will be admitted free of charge. Pit passes will be $35, but a driver and two crew members can sign in together for $25 each in all classes under a special promotion.

Advance-sale tickets for both the ‘Photobilly 50’ at Belle-Clair and the Pepsi Nationals at Federated Auto Parts Raceway are available for purchase on-line at www.worldofoutlaws.com/tickets or by calling 1-877-395-8606.