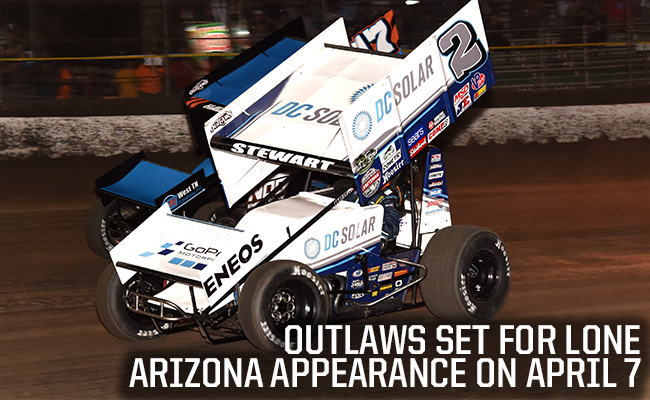 CONCORD, NC – March 28, 2018 – The World of Outlaws 40th Craftsman Sprint Car Series Anniversary Season has been plagued by Mother Nature as the Series has already lost seven scheduled events to the weather. When rain hasn’t interfered, The Greatest Show on Dirt has lived up to its name as three different drivers have already claimed their first career Outlaw win in 2018. The weather seems to be behind the Outlaws now as the Series continues their season with their third trip in three years to the Arizona Speedway in Queen Creek, AZ.

Of course, the more things change, the more things stay the same as nine-time Series Champion Donny Schatz sits atop the early season point standings with three wins to his credit. The legendary North Dakota driver has won just about everything he can in the sprint car world, but one track he does not own a victory at is Arizona Speedway. While there’s a good chance that changes on April 7, there will be a hoard of fierce competitors trying to keep the Tony Stewart Racing No.15 out of Victory Lane.

One of those drivers will be the pilot of the Kyle Larson Racing No.2 machine, Shane Stewart. Stewart, who has self-admittedly gotten off to a slower start than he would have liked in 2018, sits fourth in the Series point standings and won the World of Outlaws Craftsman Sprint Car Series inaugural event at Arizona Speedway in 2016.

“Anytime you go back to a track you have at is huge, I think. The notes you have, plus the confidence knowing that you have won there before is a big advantage. So much of this sport is based around confidence and when you and your team have it, nobody can stop you,” Stewart said. It’s true, last year Stewart won back-to-back Features in June and rattled off another hot streak in August, scoring three wins in five starts. Momentum plays a factor in all sports and motorsports is no exception.

With Mother Nature preventing all teams from getting any sort of rhythm going, the next few races – as the Outlaws season starts to ramp up – are that much more important. Tickets for the World of Outlaws Craftsman Sprint Car Series visit to Arizona Speedway are available here. As always, if you can’t make it to the track, watch all the action LIVE on DIRTVision.com.