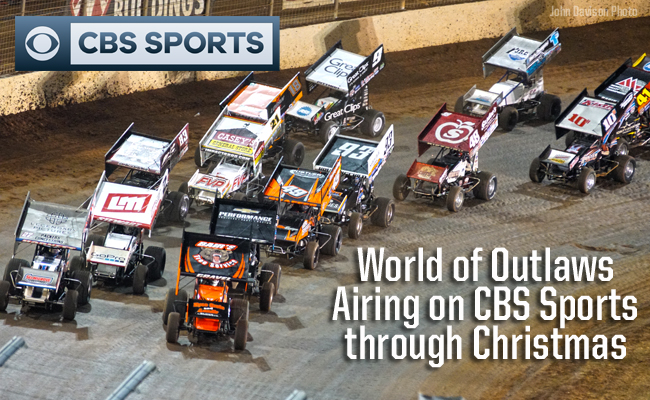 World of Outlaws Airing on CBS Sports through Christmas

CONCORD, N.C. – December 7, 2016 – CBS Sports is bringing good tidings through the Christmas season, as dirt racing’s premier series will air to a national television audience through the month of December. The World of Outlaws Craftsman® Sprint Car Series shows from the Bad Boy Off Road World Finals will air on December 18 and end with a Christmas Eve marathon on December 24.

The World of Outlaws production team and DIRTvision.com produced eight hours of television, including six broadcasts from the Bad Boy Off Road World of Outlaws World Finals at The Dirt Track at Charlotte, North Carolina. The “Greatest Show on Dirt” will share the spotlight with its sister series, the World of Outlaws Craftsman® Late Model Series in a blockbuster presentation of one of dirt racing’s most prestigious events.

“The two World of Outlaws series travel the entire country,” said DIRTcar CEO Brian Carter, “but the opportunity for these great events, including our season championship, to be nationally televised on CBS Sports will make it even easier for dirt racing fans far and wide to enjoy the show even into the off season as we gear up for next year.”

The CBS Sports air dates, listed below, will culminate in a Christmas Eve eight-hour marathon for those who prefer to binge watch all shows at once!