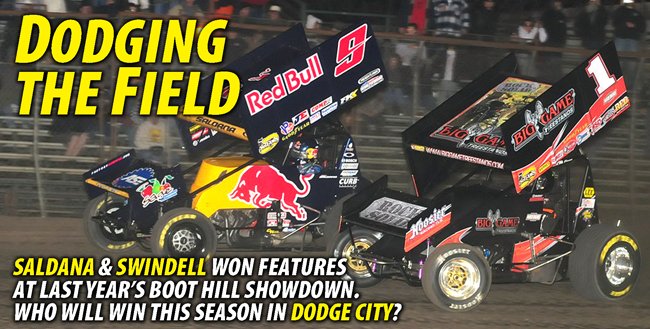 CONCORD, N.C. — April 22, 2011 — In the late 1800s, herds of stampeding cattle made their way from the plains of Texas to the rail yards of Dodge City, Kan., bringing with them some of the most legendary gunslingers in history. Names like Wyatt Earp, Doc Holliday, William “Buffalo Bill” Cody and more invoke memories of a time when Outlaws ruled the dusty streets. (Paul Trevino photo)

On July 1-2 a new generation of Outlaws will kick off the Fourth of July Weekend in the Old West town as the annual Boot Hill Showdown brings the likes of Steve Kinser, Joey Saldana, Donny Schatz and more to a place famous for excitement and the unknown. While firesuits and steering wheels have replaced spurs and pearl handled pistols, the Outlaw mentality remains the same: To be considered the winner, you must be the last man standing.

“The top is just so fast there and I enjoy racing there,” said Joey Saldana, driver of the #9 Red Bull Kasey Kahne Racing Maxim. “It suits the World of Outlaws perfect, it’s not too big, not too small.  I look forward to going there every year.”

Last year was one of the wildest Boot Hill Showdowns in history, too, when the intensity level boiled over into a front-stretch brawl between Saldana’s crew and Jason Sides’ team, right in front of the sold out grandstands. With the championship race so tight this year, anything can happen on a hot summer night in the Old West.

Saldana, a native of Brownsburg, Ind., has seemingly mastered the 3/8ths mile track, picking up five victories in 11 World of Outlaws starts, including an exciting duel last year with Meyers and 2008 Kevin Gobrecht Rookie of the Year Lucas Wolfe. He finds himself atop the World of Outlaws series points standings so far this season. With 20-time series champion Kinser only four points back and former champion Schatz and defending champion Jason Meyers hot on his heels, Saldana has Dodge City circled on his calendar as a place where he can put some distance between himself and the competition. Will one of these drivers step up and be the “quickest on the draw?” Will a new kid in town be the first to cross the finish line? Or does a seasoned veteran show them all how it’s done out west?

It’s a high octane showdown as the World of Outlaws Sprint Car Series races through the Midwest on its march to the championship-deciding World Finals at the Dirt Track at Charlotte in November. Tickets are on sale now by visiting www.WorldofOutlaws.com or www.DodgeCityRacewayPark.com. Tickets can also be purchased by calling (877) 395-8606. Adult reserved tickets are $35 in advance, $40 the day of the show. Adult general admission tickets are $30 in advance and $35 the day of the show. Fans can purchase an event “Two-Pack” that includes reserved seating for both nights and a FREE fan pit pass for Friday night’s racing action.