The Magic of Racing 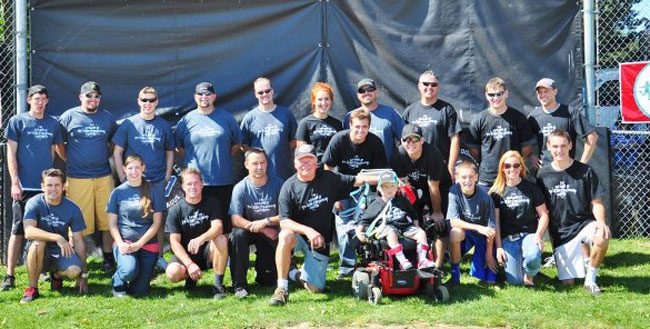 The Magic of Racing: A Story of the Sport’s Healing Power

LAS VEGAS – Feb. 22, 2013 – Every breath is a battle, a fight between willpower and a curse of nature. He’s unable to swallow and he can’t hold himself up, which confines his small body to a powered wheelchair and requires assistance and attention 24 hours each day, 365 days each year.

Christopher Lindor is 6-years-old and he has Spina Bifida.

“His spinal cord didn’t close all the way when he was in the womb,” said his mother, Amy. “He is on a ventilator to breathe. Many of his problems he had because of his birth defect were problems with his brain stem, so he can’t swallow or breathe very well on his own. But his intelligence is completely unaffected. He’s as sharp as a little tack.”

To say that Christopher is a racing fan is about as obvious of a statement as the sun is bright. There are countless stories of his knowledge and passion toward the sport, including last year when he cried “hysterically” throughout an entire church service because the Daytona 500 was in a rain delay.

Not only does he know who NASCAR star Tony Stewart is, Christopher can name his two World of Outlaws STP Sprint Car Series drivers. His favorite sprint car driver is five-time and defending series champion Donny Schatz – one of the stars of the Tony Stewart Racing stable.

While Christopher’s knowledge is vast, his memorabilia collection is enough to make every 6-year-old boy jealous. There a countless t-shirts and autographed hero cards, posters and toy race cars. Christopher routinely receives presents in the mail from friends and family across the country, but the ultimate gift was announced to his family last September.

Standing tall at 6-foot-3, Al Tschider has been a longtime volunteer for the Make-A-Wish Foundation in his home state of Washington. He’s spent more than 10 years writing checks and sending warm thoughts toward hundreds of children fighting life-threatening injuries and illnesses.

That transformed approximately four years ago when 38-year-old Tschider – better known as “Big Al” – was diagnosed with colon cancer and a failing heart. On the same day.

He shies away from specifics – “it’s not about me,” he said – but at some point in the future, Big Al will need a transplant.

“Before I would have written a check, but I would never have had time to be actually involved,” he said. “I used to be a Make-A-Wish volunteer as far as just fundraising stuff and then I switched to being a wish granter once I got sick. As a wish granter you actually go into the house and ask the kid what their wish is.”

While he has been on disability fighting the illnesses himself, Big Al saw an opportunity. He was given the time needed to go from donating money to donating himself.

A Dream Was Born

The idea of the Big Al Kids and Motorsports Foundation was created in the summer of 2011 during a busy season of racing in the Northwest. The first opportunity to go beyond came in the frame of another tiny child, Kelan Knowles.

The youngster has neuroblastoma,which is a form of childhood cancer.Big Al messaged Brian Crockett, a friend who was running Cottage Grove Speedway in Cottage Grove, Ore. Crockett donated tickets to a premier event and then Big Al contacted the Village Green Resort – Cottage Grove’s famed hotel just off the freeway exit and a mile from the track. Sure enough, they contributed a couple of rooms.

It continued to snowball from there and by the end of the weekend Kelan was on national television giving Jason Johnson a high five in Victory Lane.

An opportunity to send Kelan and his family to the 2012 Knoxville Nationals was the next goal and at that moment, Big Al decided to take his dedication to the next level. He filed paperwork and as of a year ago last Monday, the Big Al Kids and Motorsports Foundation was established (which he celebrated by having a wisdom tooth pulled a couple of days later).

“I really believe in motor sports and it gives these kids something to look forward to,” Big Al said. “They spend a lot of time at the hospitals or just doing stuff that the normal kid doesn’t have to do.”

There have been other children who Big Al has helped and he works on multiple projects at one time. His foundation is currently helping rebuild a junior sprint for Kyle Fevler, a 9-year-old from Stanwood who has mitochondrial disease, to race in the Kasey Kahne Junior Sprint Class at Deming Speedway in Everson, Wash. Fevler’s Make-A-Wish was featured on ESPN last summer with NASCAR star Kyle Busch.

And then there is Christopher, who Big Al met last summer during a chance encounter. Big Al phoned the local Make-A-Wish Foundation with extra tickets to a race at Evergreen Speedway in Monroe, Wash. The foundation called Amy and her husband, Vance, who immediately contacted Big Al.

It was Christopher’s first live race and for the boy who had been introduced to racing by one of his nurses, the experience lit up his face. He was hooked.

An Outlaw in the Making

Christopher’s first sprint car race was toward the end of last summer when the World of Outlaws STP Sprint Car Series arrived to the West Coast. He attended the Outlaws’ finale at Skagit Speedway in Alger, Wash., where he was placed in the pace truck for most of the evening.

The game was entertaining and $5,000 was raised, but one of the best moments of the afternoon happened during Opening Ceremonies. Christopher and his mom joined Big Al in front of the mound to throw out the ceremonial first pitch – or roll. But first, there was a special announcement.

Big Al told Christopher and the crowd gathered around the field that he would be going to Las Vegas the following March for a week of racing during the NASCAR weekend at Las Vegas Motor Speedway.

“I burst into tears immediately,” Amy Lindor said. “I was just shocked. I’m so glad I was wearing sunglasses because I just started crying.”

What Happens in Vegas

The Lindor family has a 15-person van, which fits both parents, Christopher and his four other siblings. That will be the vehicle – decked out in Skagit Speedway and Big Al Kids and Motorsports Foundation stickers – of choice during the 22-hour drive from Washington to Las Vegas in a little more than a week, which Amy said they will break into three, seven-hour drives.

“Christopher has been checking the weather in Las Vegas every day for like the last three months,” she said.

They are scheduled to arrive the night before the World of Outlaws STP Sprint Car Series doubleheader – Wednesday and Thursday, March 6-7 – at The Dirt Track at Las Vegas. The series donated tickets for Big Al, Christopher and the other seven family members and nurses to attend both nights.

There are several tours lined up and likely a night on the famous Las Vegas Strip; NASCAR races and sprint car races.

“To be selfish, I’m looking forward to the Outlaw races as much as that NASCAR stuff,” Big Al said. “I’m a sprint car guy.”

The ultimate objective – like every World of Outlaws STP Sprint Car Series event – is to put a smile on each fan’s face. However, on that week in the city of bright lights, there is a special fan who will likely put a smile on everyone else’s face.

To join Christopher, Big Al and the World of Outlaws STP Sprint Car Series in Las Vegas, tickets can be ordered online by clicking WorldofOutlaws.com/tickets or by calling 877-395-8606.