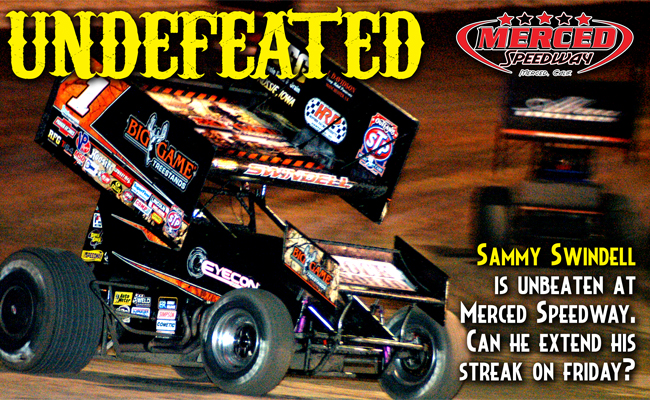 Swindell Seeks to Remain Undefeated at Merced on Friday Night

Swindell, a three-time champion with 292 victories, is the only driver who has finished in the top five in all three previous Outlaw events at Merced. However, Swindell will have his hands full with not only the Outlaws but also an impressive array of California racers, including Rico Abreu, who beat the Outlaws two weekends ago in Tulare, Calif.

Championship points leader Paul McMahan, who was fifth last season at Merced, was raised in California and would love nothing more than to post his second victory of the season on Friday night. Kasey Kahne Racing’s Brad Sweet, another California native who is competing for the championship for the first time, is a two-time winner this season and looking to keep the pressure on McMahan.

After Swindell, two other drivers have fared well at Merced. Jason Sides has a pair of third-place finishes while California superstar Tim Kaeding has run second and third. Kaeding no doubt would love nothing more than to get his first win of the season on Friday night.

Tony Stewart Racing’s Donny Schatz, a two-time winnerthis season, was narrowly edged out on Saturday night in Stockton by Kerry Madsen in a race nobody will soon forget. Schatz has one top-five run at Merced but is the only driver with seven top-five’s to start this season in his quest for a sixth World of Outlaws STP Sprint Car Series championship.

Last year’s runner-up Daryn Pittman was the eventual series champion last year. With a win on the same weekend as Abreu’s at Thunderbowl Raceway, Pittman and his Kasey Kahne Racing crew is hitting on all cylinders.

Friday night’s event will also mark the final time Steve Kinser races during his “Salute to the King” tour at Merced in his quest for a 21st championship. Kinser’s average finish at Merced is 11th, with a best of seventh in 2012. This season has been somewhat magical for Kinser. He’s fifth in the championship entering this weekend with a highly emotional victory in Florida and a series of podium finishes that kicked off the west coast swing.

WHAT TO WATCH FOR: Ironman 55 to Challenge Outlaws This Weekend