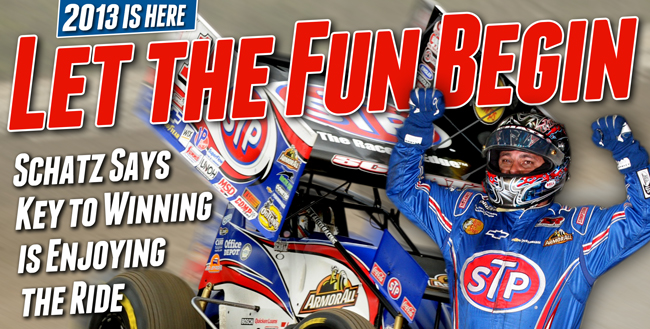 BARBERVILLE, Fla. – Feb. 14, 2013 – Donny Schatz is a winner. In fact, in the past 10 years nobody has won more World of Outlaws STP Sprint Car Series features than him. He’s captured five of the past seven series championships, he’s won six of the past seven Knoxville Nationals titles and he’s the only driver in history to win the Williams Grove National Open five times. Makes you wonder what he’ll do in 2013.

Clearly, winning is big for Schatz and his Tony Stewart Racing team, but with all his experience Schatz has gained some perspective on the delicate balance between life and racing. In 2013, Schatz says there’s going to be an emphasis on having fun along the journey. When the schedule includes more than 90 races from February to November, that stance might make him even tougher to beat when the season begins on Friday night during the UNOH DIRTcar Nationals Presented by Summit Racing Equipment at Volusia Speedway Park.

“Winning is important,” said Schatz, 35. “It’s what we expect out of ourselves after having won so many things. It’s what our sponsors expect out of us after winning so many things. But the mindset has kind of changed for myself and my race team. You can win every day and not enjoy it. You can win every day and not have as much fun as you should. We’re just kind of attacking it like we’re going to make the best time out of it we can.

“We still expect to win, but you don’t know when your last day is going to be, or if you’re ever going to be able to do it again, so you might as well live every day like it’s the last. Some nights we might not have a very good night at all but we aren’t going to hang our heads. It’s something we enjoy to do, nobody forces us to do this, nobody makes us do this. This is what we want to do and if we’re not having fun then you have to figure out how to make it fun.”

As a five-time champion, the demands on Schatz and his time are many, but whether it’s an appearance off-track or greeting sponsors right before he buckles in to race, Schatz is always quick-witted and can easily turn a joke or offer insightful commentary. It’s his ability to see the big picture that has allowed him to grow more at ease with the demands on his time as they increase.

“It seems like when we have fun as a team and we have fun as a group it correlates more to the fans and to the people who surround us and makes everything a happier picture,” Schatz said. “It makes it better for everyone. That’s our goal, first and foremost that everybody is enjoying themselves along the way and the performance will come along with that. If we’re having fun the wins will be there, the performance will be there.”

Performance is rarely an issue for Schatz, whose 124 victories ranks fourth all-time behind only Steve Kinser, Sammy Swindell and Mark Kinser. His 11 wins in 2012 were enough to earn him his fifth World of Outlaws STP Sprint Car Series championship, and since 2004 he’s earned 111 victories, seven more than 20-time champion Steve Kinser, who all sprint car drivers are ultimately measured against.

Schatz and the World of Outlaws STP Sprint Car Series launch the new season on Friday night during the UNOH DIRTcar Nationals Presented by Summit Racing Equipment at Volusia Speedway Park. No doubt the competition will be fierce on the road to Charlotte in November, but one thing is sure, Schatz and his crew will have some fun along the way.