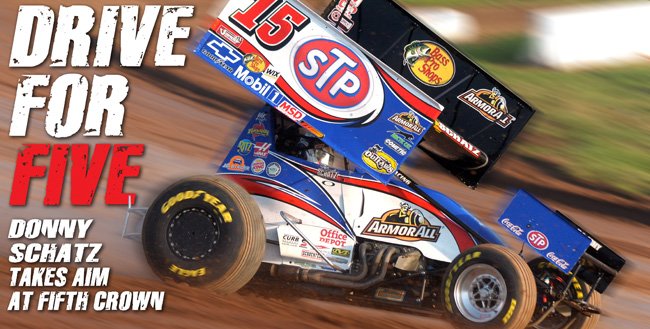 Despite finishing second in the World of Outlaws standings each of the past two seasons, the Tony Stewart Racing driver admitted that he struggled in doing so. While he won the famed Goodyear Knoxville Nationals at Knoxville (Iowa) Raceway last year, it was one of only 13 feature victories the past two seasons.

In winning four consecutive championships from 2006-09, Schatz averaged 16.5 feature wins each season and claimed the Goodyear Knoxville Nationals each year.

“The last couple of years we’ve definitely been off our game a little bit,” he said. “You can’t have success without failure. If you don’t learn what not to do you don’t know what to do. The team that Tony (Stewart) has assembled, we’re all competitive people. We pushed each other to limit and maybe even over. The same mentality that got us in trouble is what brought us back to the winning stages and having a dominant race car.”

The Minot, N.D., native said his team that ended last season by sweeping the Lowes Foods World Finals has returned and the focus for 2012 is simple — win races.

“We’re kinda just going after wins,” he said. “Win as much as you can and the championship takes care of itself.”

Schatz has claimed four of the 19 World of Outlaws features at the quick, half-mile oval. In 2009, he won two of the three races.

“Volusia is a place you can go and be extremely good or extremely bad,” Schatz said. “It can set the tone for the whole year.

“It’s a big race track and the conditions can be so different from day to day. You just have to keep as much speed up as possible.”