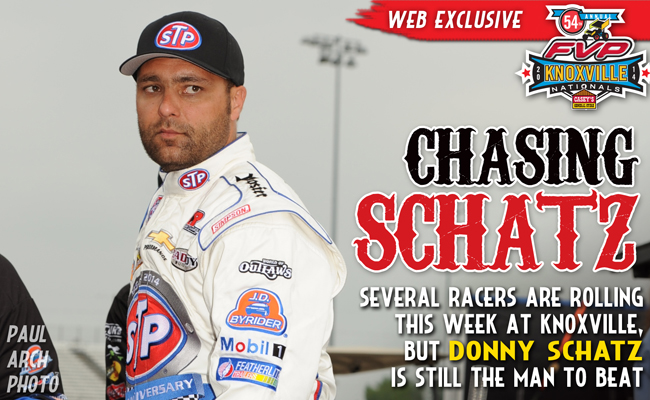 KNOXVILLE, Iowa – Aug. 9, 2014 – It is hard for a driver to be more on top of his game than ever and still be racing under the radar, but that’s the general feeling at the FVP Knoxville Nationals presented by Casey’s General Stores.

Donny Schatz is a five-time World of Outlaws STP Sprint Car Series champion. His 12 wins so far this year has helped him build his biggest points lead at this time of the season in more than five years. He’s won the FVP Knoxville Nationals seven of the past eight years and has finished first or second in 12 of the past 14 runnings of sprint car racing’s richest week at Knoxville Raceway on the Marion County Fairgrounds in central Iowa.

Still, with 105 cars at Knoxville this week there’s a lot of buzz for local hero Brian Brown, who has finished second to Schatz each of the past two Knoxville Nationals and won the first of two qualifying features this week in his FVP/Casey’s General Store car. Expectations are also running high for former Knoxville Raceway champion Kerry Madsen to ascend to the top of the sport in his American Racing Custom Wheels car after his recent victories in the high-profile and high-paying Kings Royal and Ironman events. Then Shane Stewart surged to victory last night in the second qualifying event, giving him his sixth victory at Knoxville in his Kick-It car co-owned by Kyle Larson and reinvigorating his large Knoxville fan base.

But when the field comes to green tonight in the 50-lap, $150,000-to-win A-main, they’ll all be chasing Schatz and his special Tony Stewart Racing car honoring STP’s 60th Anniversary. Schatz accumulated the most points through qualifying, heat race action and the qualifying feature, and will start from the pole position for the fifth time in his career. That’s a scary proposition for many in the field because last year Schatz was forced to transfer from the Last Chance Showdown into the A-main, then raced his way from the back of the field into the lead, an historic win and a demoralizing victory for every other racer in the field at the same time.

“It’s a mental thing,” said Schatz, 36, of Fargo, N.D. “If you think you are beat, you are. The Saturday night of the Knoxville Nationals is like no other with all the hype put on it. You can see it in how guys walk around the pits Saturday afternoon. I had the chance last year to just kind of watch the way guys composed themselves on Saturday afternoon. It’s amazing to see how each person reacts to different things on the mental side of things. Last year, I probably wouldn’t have been able to just sit there and observe those things if we hadn’t won it before. I would have probably been on edge, nervous and trying to figure out what I do all afternoon. But there we were, parked way down in the middle of the B-Main field and kind of off the radar and not being overwhelmed by it all. The mental part is huge and that’s why Steve Kinser has won so much, because he’s mastered the mental side. We all strive to be as strong as him mentally and some of us have got a little bit of that, but not quite where we want to be.”

Tonight it’s Donny Schatz vs. the field, and Schatz wouldn’t have it any other way.