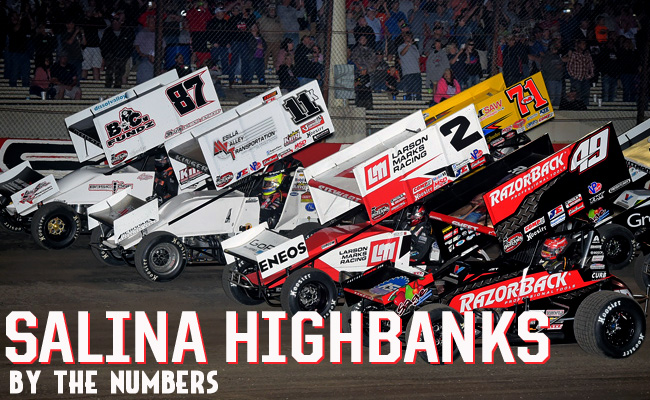 SALINA, OKLA. — Oct. 12, 2016 — The World of Outlaws Craftsman® Sprint Car Series returns to Salina Highbanks Speedway on Saturday, October 22 for the O’Reilly Auto Parts Twister Showdown, which was postponed by rain back in April. The race will mark the one and only stop of the season for the “Greatest Show on Dirt” in the state of Oklahoma. Following the event, just a pair of races remain on the 2016 calendar as the series heads to Charlotte for the Bad Boy Off Road World Finals. This edition of By the Numbers sets the stage for the O’Reilly Auto Parts Twister Showdown at Salina Highbanks Speedway on Saturday, October 22.

Tickets for the O’Reilly Auto Parts Twister Showdown for the World of Outlaws Craftsman Sprint Car Series event at Salina Highbanks Speedway in Salina, Okla., on Saturday, October 22 can be purchased online at or by calling SLS Promotions at 815-344-2023 and at the track on race day.