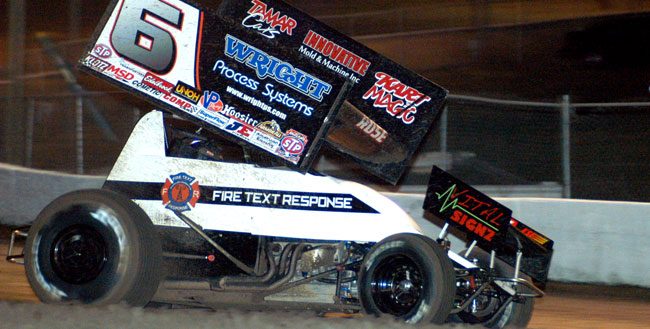 Bill Rose probably wouldn’t mind having no luck after injuries have plagued his last three seasons. Rose, who broke his left forearm during an incident on the final lap of his heat race at Volusia Speedway Park in Barberville, Fla., on Feb. 16, will miss the next three World of Outlaws STP Sprint Car Series events because of the injury.

After a follow-up visit on Monday to a doctor in his home state of Indiana, Rose made the decision to sit out the World of Outlaws STP Sprint Car Series doubleheader at The Dirt Track at Las Vegas on Wednesday and Thursday, March 6-7, and at the Wildcat Shootout Presented by NAPA Auto Parts at Tucson International Raceway on Saturday, March 9.

“The biggest bone in my forearm split in half,” Rose said. “My elbow’s all jacked up. My whole bicep is black and blue. (The doctor) wanted me to sit out for six weeks.

“The problem right now is I don’t have any grip strength. I can’t even hold anything with my hand.”

Rose is putting David Gravel in the car for those three races with the option of continuing to compete if Rose doesn’t feel ready to race on March 15-16 at Thunderbowl Raceway in Tulare, Calif. Rose, who is wearing a splint over his left arm, had his doctor make a different, specific splint that he can use to race.

“It’s a shame that he got injured again,” Gravel said. “I’m glad he chose me. To be in a World of Outlaws car is definitely huge and hopefully there’s more to come in the future.”

Tickets for the races in Las Vegas and Tucson can be ordered online by clicking WorldofOutlaws.com/tickets or by calling 877-395-8606.