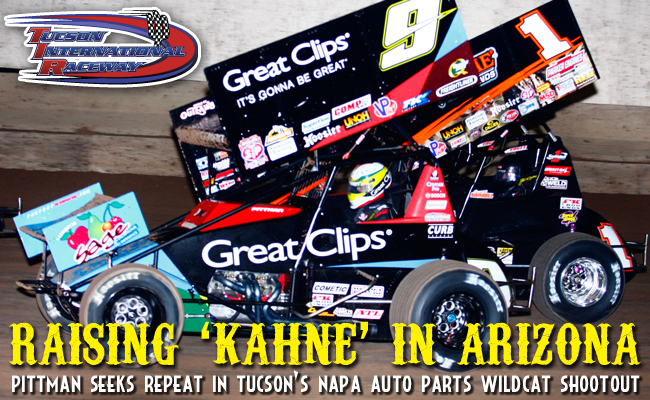 “I really love Tucson,” Pittman said. “I told Kasey last year I was really excited about Tucson. I had never won there before, but it’s a really a fun track that suits me. It’s pretty flat and wide and somewhere I really enjoy.”

In addition to the on-track action, NAPA Auto Parts is now title sponsor of the event and, in conjunction with the World of Outlaws STP Sprint Car Series, will enhance the entire race experience for fans during the series’ only trip this season to Arizona. Also, fans can get $5 off their race-day ticket purchase by bringing a valid receipt from any area NAPA Auto Parts store.

Steve Kinser, the 20-time World of Outlaws STP Sprint Car Series champion who is celebrating his “Salute to the King” season, earned a victory in March 2007 at Tucson. The 2014 running of the NAPA Auto Parts Wildcat Shootout will mark Arizona fans’ last chance to see the “King of the Outlaws” compete in their home state for an Outlaw championship.