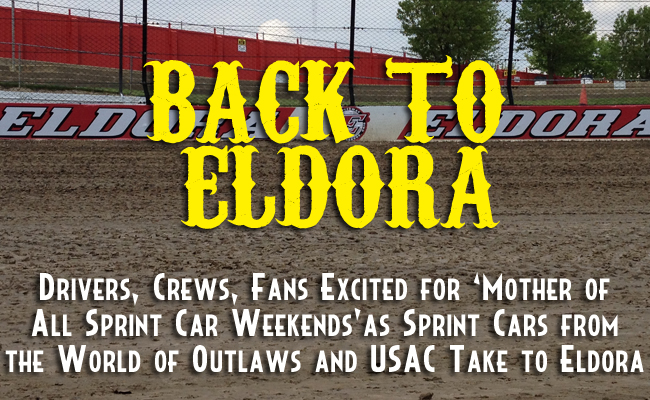 Sprint Cars from the World of Outlaws and USAC Take to Eldora on May 8-9; Tickets just $25

The USAC sanctioning body has been competing at Eldora since 1962 and Dave Darland is looking for his 100th USAC win and his 56th in sprint cars. Darland has won twice this season and has five wins at Eldora including in April 2014.

“It will be a great opportunity for winged and non-winged fans to get to see the other in competition and enjoy the plusses of each series,” Darland said. I hope everybody has a fun time and comes away with good memories. I’m looking forward to the May 8-9 races at Eldora. It’s one of my favorite tracks and has been very kind to me in the past. It would be great to get my 100th USAC National victory there. The weekend presents a one-of-a-kind opportunity for USAC and the World of Outlaws and it should generate a huge following of fans.”

Four drivers, Jac Haudenschild, Steve Kinser, Danny Smith, and Brad Sweet have won in both divisions at Eldora. And there has been plenty of build up to this event.

Since 2010, the hot driver at Eldora in World of Outlaws competition has been Joey Saldana, who has won six times in that period.

“I love going there,” Saldana said. “It’s about two-and-a-half hours from my house (in Brownsburg, Indiana). It’s awesome to be able to race that close to home and to be able to race on a track as prestigious as that. You want to be able to excel and definitely going in there in May for a two day show gets you ready for the Kings Royal (in July). Not that it’s the same track but it’s the same atmosphere. It’s just such a different track to race.”

He is also excited about racing with USAC.

“Huge fan,” Saldana said. “Looking forward to it. For me, growing up, that’s what I got to see a lot of. One of my last races was Four Crown when my dad was racing a sprint car and champ car there at Eldora. I think it’s a great way to get fans to see both styles of racing. I’m a fan of sprint car racing so I’m looking forward to racing and watching the USAC guys.”

Adult tickets are just $25 per night and can be purchased via http://www.eldoraspeedway.com/races/schedule/mother-of-all-sprint-car-weekends/tickets/ or by calling (937) 338-3815.

Since carved from a cornfield in the natural amphitheater that existed between the Eldora Ballroom and the Wabash River by bandleader Earl Baltes in 1954, Eldora Speedway has grown to be a frontrunner in motorsports growth and stability. Celebrating its 62nd season in 2015, Eldora hosts the biggest events in short-track racing including the 21st annual Dirt Late Model Dream by Ferris Mowers; the 32nd annual Kings Royal Weekend; the third NASCAR Camping World Truck Series 1-800-CAR-CASH Mud Summer Classic; and the 45th annual World 100. The complete schedule for Eldora’s 62nd consecutive season, including ticket and campsite information, is available at www.EldoraSpeedway.com and can be requested by phone at (937) 338-3815. Fans can get behind-the-scenes access of Eldora Speedway by following @EldoraSpeedway on Twitter, hitting ‘Like’ at www.facebook.com/EldoraSpeedway and on www.youtube.com/EldoraSpeedwayInc . The Eldora Speedway app for the iPhone, iPad and Android is available for free download via iTunes and Google Play.