Outlaws Back To Belleville 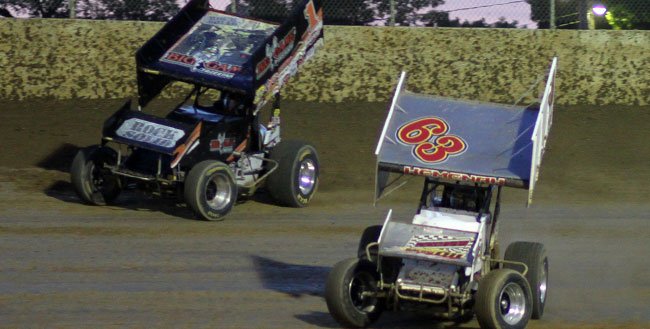 World of Outlaws Prepare for the High Banks of Belleville

The sprint car series will make its third visit to the half mile on Friday, June 29

That’s the best way to describe the Belleville High Banks, which hosts the World of Outlaws Sprint Car Series on Friday, June 29.

It’s the season opener and one of only six races at the high-banked, half-mile oval, which welcomed the return of the Outlaws last season after a 30-year absence.

“That place has built up a reputation for being one of the bigger, faster race tracks in the country and it lives up to it,” Chad Kemenah said.

Paul McMahan set the track record of 14.258 seconds last year en route to picking up the first World of Outlaws feature at Belleville since 1981, when Doug Wolfgang won the inaugural event.

“For us when we go to Belleville, it’s so fast for our cars and there’s so much room you can kind of race from top to bottom and you’re still the same speed,” Cody Darrah said. “It’s a pretty tricky track to find an advantage on everyone because of how fast the track is the whole way around.”

Built in 1910 to showcase various types of racing from horses to motorcycles, Belleville High Banks is a near-perfect circle with sweeping turns that tests everything from the drivers’ courage to the strength of the parts on the cars.

“It’s just such a unique track,” Kerry Madsen said. “It’s such a big circle. It’s such a unique challenge on our engines, on the car side of things. When it widens out and gets near the wall, it’s pretty cool.

“It suits my style; I like the high-speed, wide-open stuff. It just seems like I have a good combination for there and I’m pretty excited about it.”

Reserve seat tickets and Pit/Combo tickets are available in advance only (pit/combo ticket includes a reserved seat and a pit pass) order online at SLSpromotions.com or call 1-815-344-2023 between the hours of 8 a.m. and 5 p.m. (Central) Monday thru Friday.