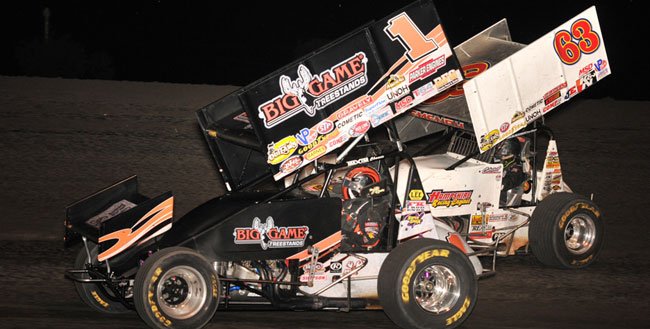 World of Outlaws Return to Lakeside Speedway on Saturday, June 30

Swindell won on dirt in 1983 and on pavement in 1991 and 1992 at the semi-banked, half mile, which hosts the World of Outlaws Sprint Car Series on Saturday, June 30.

Dirt fans, don’t worry. Lakeside Speedway is no longer paved and the track is better than ever after a flood ended last season early at the facility.

“That’s a really racy race track,” Chad Kemenah said. “It seems like cars get going all over – top, bottom, middle, everywhere. We always have a huge turnout of fans who come out and support that, which is really neat. It’s a fun race to race.”

Along with Doug Wolfgang, who swept all three events in 1981, Steve Kinser joins Swindell as the only members of the three-win club at Lakeside Speedway.

However, there are some new kids on the block who want to find their way into Victory Lane.

“That’s sort of my style of race track,” said Cody Darrah, who finished third last season. “I had a pretty good feel for it last year and hopefully we have a car to win like we did last year.”

There is a ticket special with a $5 discount on general admission at all participating O’Reilly Auto Parts stores. Reserve seat tickets and Pit/Combo tickets are available in advance only (pit/combo ticket includes a reserved seat and a pit pass) order online at SLSpromotions.com or call 1-815-344-2023 between the hours of 8 a.m. and 5 p.m. (Central) Monday thru Friday.