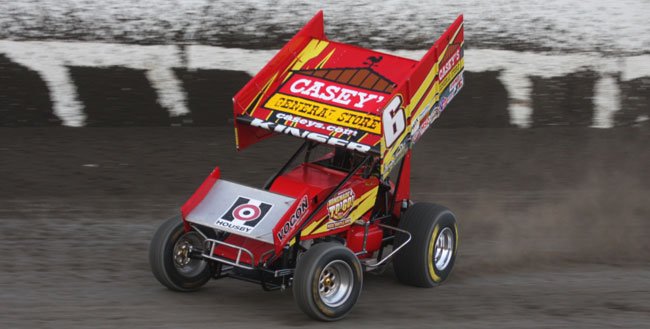 History on Kraig Kinser’s Side when Outlaws Invade Cottage Grove

COTTAGE GROVE, Ore. — Sept. 4, 2011 — Kraig Kinser’s sprint car career was on the rise in 2005. The son of legendary driver Steve Kinser, Kraig proved that racing was in the family genes as he compiled an impressive record win six wins that season, including a trip to Victory Lane in the 45th Annual Goodyear Knoxville Nationals. (Steve Curtis photo.)

After a two-year stint in NASCAR and ARCA, Kinser returned to the World of Outlaws Sprint Car Series driving first for Tony Stewart Racing and in then his Kinser family’s car. Heading into 2011, the third generation driver took over one of the most recognizable rides on the tour, the Lonnie Parsons-owned #6 Casey’s General Stores Maxim. The pairing had high hopes from the start but bad luck seemed to follow the team everywhere it went.

“We’ve had numerous good runs throughout the year,” said Kinser, whose best finish of the season so far is a fifth at during the DIRTcar Nationals. “Unfortunately, wrecks, mechanical problems and more have prevented those runs from showing up on the stat sheet. It’s taken a little while to get comfortable and get going, but here lately I think we have really stepped up our game and have proven we are capable of running near the front, night in and night out.”

Three top-10 finishes in the past seven races have shown the team is capable of running strong. Looking forward, Kinser and his team have circled Monday night’s race at Cottage Grove (Ore.) Speedway on the calendar. Kinser earned the first victory in his World of Outlaws at the quarter-mile bullring in 2004, and the #6 team scored its only victory of 2010 there with veteran driver Danny Lasoski.

“Cottage Grove is a cool little track,” Kinser said. “It’s certainly a place where you have cars all around you all the time and it can be tricky to navigate. More than anything it’s a fun place to race. We’re hoping to get this car back into victory lane and maybe it can be there.”

Kinser and the entire #6 Casey’s General Stores team will go for their first victory of the season as they and the rest of the World of Outlaws Sprint Car Series head for a Labor Day Bash at Cottage Grove Speedway on Monday, Sept. 5. For more information or tickets, visit www.CottageGroveSpeedway.com.