Johnson Back In the Saddle Again 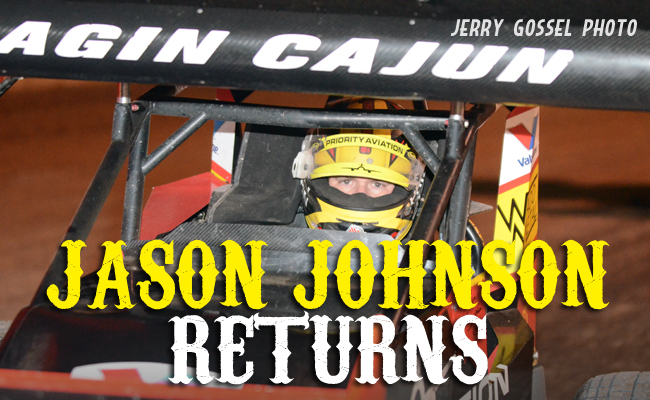 Back in the Saddle: Jason Johnson Returns to World of Outlaws Competition this Week at Lakeside Speedway

KANSAS City, Kan. – June 29, 2015 – The last two and a half months have gone by a little slow for Jason Johnson. While his fellow World of Outlaws Sprint Car Series competitors raced 26 times during that span, Johnson waited patiently to heal up, after suffering fractured vertebrae in an accident in California on April 5.

Johnson, who hails from Eunice, Louisiana, and is the leading contender for the Kevin Gobrecht Rookie of the Year Award this season with the World of Outlaws Sprint Car Series, will return to action this week on Wednesday, July 1 at Lakeside Speedway in Kansas City as O’Reilly Auto Parts Presents the Outlaws at Lakeside.

“It was definitely tough not being in the race car every night,” said Johnson. “When I set out to run the full World of Outlaws schedule, I never thought I’d be an owner and not a driver. I learned a lot during the time out of the car and I’m thankful to all of my sponsors for being so supportive and the crew for continuing to work hard night in and night out. We’re definitely looking forward to the rest of the season.”

Prior to getting injured, Johnson has made 13 starts in World of Outlaws competition this season, earning five top-10 finishes, including a season-best fifth-place finish at the Stockton Dirt Track in California. Just before his crash on April 5, Johnson had a four-race top-10 streak going as he continued to get acclimated with competing full-time with the World of Outlaws Sprint Car Series.

While he was injured, Johnson kept his No. 41 Priority Aviation/Messila Valley Transportation machine on the road, with a trio of drivers splitting duties. First, was two-time World of Outlaws champion Jason Meyers, who was behind the wheel for the final four of the California swing, picking up a pair of top-10 finishes. Meyers was followed by Australian Jamie Veal, who earned a top-10 at the famed Eldora Speedway in Ohio on Mother’s Day Weekend.

Last, but certainly not least, three-time series champion and Hall of Famer Sammy Swindell was in the car for a few weeks. The team earned five top-10 finishes during Swindell’s time behind the wheel of the No. 41, which was highlighted by a fifth-place finish at I-55 Raceway in Missouri. Swindell also set fast time and a new track record at Dakota State Fair Speedway in South Dakota.

“Sammy was great for our team and we can’t thank him enough,” said Johnson. “I respect Sammy tremendously as a driver and a person and really appreciated getting to know him better. I appreciate him joining and helping our team at a time when we needed it most. Both Sammy and Amy became part of JJR and we are very appreciative and thankful.”

Johnson, who travels in a motorhome, attended most of the races while he was injured, along with his wife Bobbi, who operates the team’s merchandise trailer. The couples’ young son Jax has also been on the road with them this season.

“I would never travel without my wife,” said Johnson. “Having Jax with us on the road is something I’ll always cherish. To be able to spend the whole day with him and to run up and down the trailer with him and see him play with all of his Matchbox cars is pretty cool. It’s very enjoyable and I’m glad everything has worked out for him to be out there with us.”

With the season nearing the halfway point, Johnson has the potential to race around 45 more times this season with the World of Outlaws. In July alone, there are 14 races awaiting the series, followed by a busy August and September as well.

Johnson, who received medical “hardship points” during the time he was injured is currently 13th in the driver standings and ninth in team points, thanks to keeping the car on the circuit, with the trio of fill-in drivers.

Tickets for O’Reilly Auto Parts Presents the Outlaws at Lakeside on Wednesday, July 1 can be purchased online at: http://slspromotions.ticketforce.com or at the track. All tickets purchased in advance for the originally scheduled race on June 6 will be honored on July 1.

Fans can also take advantage of the O’Reilly Auto Parts $5 OFF Special and receive $5 OFF when purchasing a General Admission ticket at participating local O’Reilly Auto Parts stores. The ticket buyer will exchange their O’Reilly receipt for a ticket at the Main Grandstand ticket booth on race day.