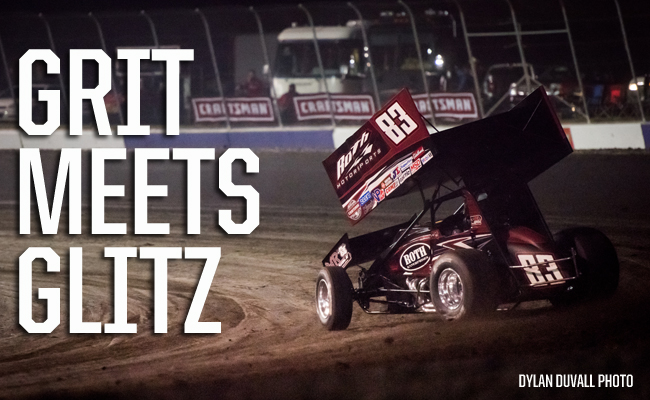 Joey Saldana adds an old-school touch to the big stage

CONCORD, N.C. – Oct. 20, 2016 – Joey Saldana may be a second generation racer within his family, but he still believes he is the cut from Sprint Car racing’s original fabric. In Saldana’s 20-year career with the World of Outlaws Craftsman® Sprint Car Series, he has arguably dressed more for the shop than for the racetrack. To him, driving is just a fraction of the job.

The “Brownsburg Bullet” currently stands at 99 career wins with the Outlaws. Approaching the triple-digit milestone, Saldana reflects on his many years of not only racing, but also the behind the scenes work that may not be all the smoke and mirrors fans anticipate each weekend.

With the milestone, Saldana will join both active and retired legends of the sport. In the ever-growing list of Platinum drivers that have competed full-time in the series, Saldana will be in a select group that includes Steve Kinser, Sammy Swindell, Donny Schatz, Mark Kinser and Doug Wolfgang as the only series drivers to record 100-plus series wins. Among that group, Schatz is the only active driver in the series.

“It’s hard to get noticed when you got great guys you’re racing against – unbelievably talented people like a Donny Schatz or Steve Kinser,” Saldana said. “So my whole racing career, you’re kind of in the shadow of those guys. You put Steve Kinser as a Michael Jordan…you can’t attain that. It’s something very special, and Donny has shown that he’s just as special. But I think that’s the accomplishment for me [to be considered in that group]. Not necessarily the 100 [wins] itself.”

Though Saldana’s time with the Outlaws dates back to 1996 – when he won the much sought after Kevin Gobrecht Rookie of the Year award – his racing background is hereditary. Saldana is the son of 2000 National Sprint Car Hall of Fame Inductee “Little Joe” Saldana, who won the Knoxville Nationals and the Knoxville season points title in 1970. Success seemed to flow through the family bloodline but aside from statistical accolades, Saldana values the intangibles. Simply put: he values hard work.

He reminisced to the days when lessons were learned and when his father offered him the principles he stands on today. His father taught him all the aspects of racing – mainly the sanctity of respecting other drivers and the true cost to race. It was not only money, although that was necessary. It was knowing that a little elbow grease went a long way in the sport, and that if he wanted to race, he had to know his way around the shop.

Saldana listened to his father. Upon his father retiring after a storied 25-year career, Saldana aspired to continue the legacy left for him. He got all of his father’s hammy-down equipment and a sprint car with a 370 cubic-inch motor.  Saldana was set for stardom.

In his first year, he worked with 2009 National Sprint Car Hall of Fame Inductee Lee Osborne building all sorts of racecars. With Osborne’s shop fifteen minutes from where he grew up, Saldana’s father urged that he learn by doing. He went to work.

Osborne, who found sprint cars from a motorcycle and dirt modified background when he was 23, started to learn about the mechanics of sprint cars through his misfortunes at Reading Fairgrounds Raceway and Williams Grove Speedway – from broken gear boxes and rear-ends to blown motors. It was Osborne’s first couple races then; this time, Saldana was in the same boat.

Saldana then teamed-up with Donnie Ray Everett for five months, trading his work for a rebuild on his motor. Everett was the chief engine builder of Longhorn Racing. Saldana prides himself on using his hands for more than directing a racecar. Here, he learned the value of creating a car fit for racing – or at least one to last him through the race.

“Back in my day, you were in shit-boxes trying to learn how to race these things,” Saldana said. “But then you get respect. You respect the car, and you respect your driver. I think a lot of that isn’t here anymore, and it sucks.”

Saldana is “old-school,” but he does not want to be confused with an old-timer reveling in racing’s golden years. At 43 years old, Saldana said he is poised to meet the 100-win mark. Technology has changed since when he first began, and that is a reason why the series has become a powerhouse inundated with young-guns, he said. Even so, nowadays racing scene feels cookie-cutter to him.

“You can just go call UPS and [the parts] show up on your doorstep, and you put your car together,” Saldana said. “You can buy all the same equipment Donny has, and I think that’s why the kids excel so fast because they’re in very good equipment. But I feel like I’m probably one of the last old-school guys that actually had to go and work – build my own pitman arm, build my own front axle and build my own bird cages. I built it all with my own two hands to go race it.”

When he envisions himself meeting the others in the 100-win group, he thinks about how they founded success. His racing idol, Wolfgang, is one driver whose career resonates with him the most. Currently eight wins from Wolfgang’s 107-win career, Saldana said it is quite the accomplishment to even be in the same breath as him.

“To be this close to those guys, and obviously Doug Wolfgang is the closest guy I’m to, it just means a lot that I have accomplished something,” Saldana said. “Maybe I’m not elite like these other guys, but I’ve been out here just working hard to compete.”

Wolfgang competed in the series’ inaugural season, which featured 41 events coast-to-coast. Similar to Saldana’s father, Wolfgang won the Knoxville Nationals at the historic Knoxville Raceway that year. But moreover, it was Wolfgang’s tenacity that made him an idol in Saldana’s eyes.

“He just did a lot,” said Saldana, mirroring his down-and-dirty attitude. “He could build his car, work on the car, take the car to the track, race it and beat Steve Kinser Sammy Swindell. He could be very competitive.”

Saldana, who is five years from competing as long as his father had with just the Outlaws alone, does not think about the win mark during the race. At Williams Grove this season, he was the pole-sitter for the 40-lap feature and led 36 laps. He fell short with a second place finish.

But Saldana, who has recorded top-three championship points runs in four years with the series (2003, 2006, 2007, 2009), looks at the bigger picture. He has taken the attitude of a taught first generation racer to a modern racing world with strides.

“[My career] has been a work in progress, and that’s something I want to accomplish before I’m done is to get at least 100 [wins],” said Saldana, who has four more chances to meet the mark in 2016.