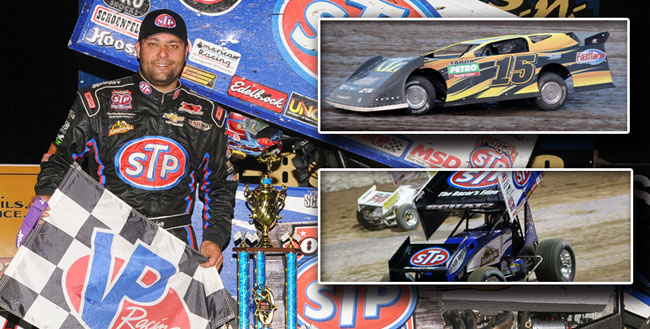 GRAND FORKS, N.D. – June 18, 2013 – Donny Schatz earned a pair of World of Outlaws STP Sprint Car Series feature event wins last weekend, by capturing victories at Jackson Speedway and Knoxville Raceway. On Friday night at River Cities Speedway he will add to the challenge by competing in not only his normal STP/Armor All sprint car but also an NLRA Late Model entry.

“We’re excited about the opportunity to give the fans a chance to see someone compete in both classes,” he said.

Schatz knows his way around River Cities Speedway, earning World of Outlaws STP Sprint Car Series feature wins there in 2008 and 2009. Even with a second car to worry about, Schatz says the team will still be focused on the sprint car.

“The World of Outlaws race is the focus and we really need to get our STP car back to victory lane at River Cities. We’ve had some good runs up there, but it’s been a few years since we’ve won one.”

Schatz has competed in the late model a few times this year.

“It’s been a big learning curve and I know it’s going to be tough up there,” he said. “Those guys are really good. I’m just learning as much as I can every time I get into the car. It should be a great night of racing. I know my STP guys are really looking forward to us getting up there and having a chance to win that sprint car feature. We’ll go out and do our best.”