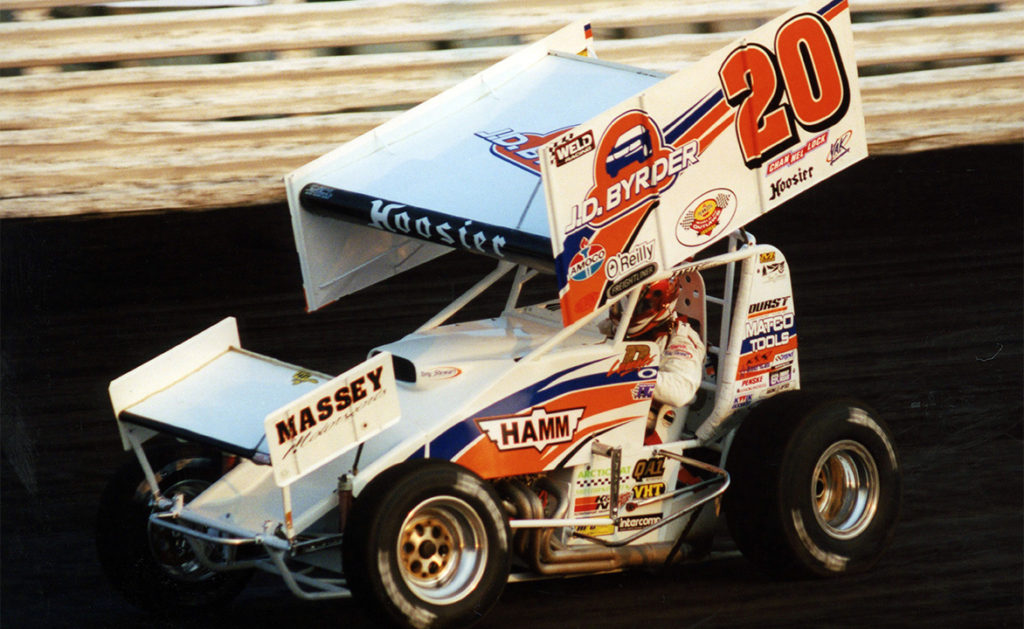 “Let’s never forget what happened September 11th. They’re trying to change our country but we’re not going to let them.”

Two decades ago, in the rubble of the deadly airstrike on America, that quote could have been pinned on George W. Bush, U.S President for eight months by 9/11. Instead, that solemn promise came from Ted Johnson, President of the World of Outlaws and a transplanted Texan like W. Ted’s wagon train was between Chico, CA, and Fort Worth, TX, on that terrible Tuesday. Friday and Saturday at Texas Motor Speedway were erased as abruptly as COVID has halted races over the past year. The dirt track at TMS was a year old. Losing its fourth NASCAR Outlaw weekend punched a hole in the Sprint Car schedule after 81 of 98 races and wounded Danny Lasoski’s chances of catching Mark Kinser for the championship.

Mark wore a goofy grin as California flashed in his motorhome mirrors. The wizard’s kid finally had a Gold Cup wreath to go with his first Kings Royal robe. Life was good. He had four times as many wins as Lasoski, and after losing the point lead 10 times in three months spent 22 races atop the charts. Karl Kinser, dutiful Dennis Kohler and two Kahnes combed Mopar Maxims for the stretch run through Williams Grove National Open, World Finals and Las Vegas wrap. Why worry?

Seven months before 9/11, the World of Outlaws chose Kings County, California as its fourth straight season opener. Among its 37 drivers were 10 men who began perfect attendance. Five more were as loyal as injuries allowed. Andy Hillenburg’s Don Ott J&J scored at Hanford and Vegas after rain removed Perris. The first point lead of his career was brief. “Danny The Dude” Lasoski landed Dallas to pace points. Craig Dollansky won in Dallas and Oklahoma City in a strong return to the 2001 Pennzoil tour as champ of the first Gumout Support Series. Steve Kinser captured the 536th win of his Outlaw career before Cali refugees Paul McMahan (Warren Johnson u2) and Randy Hannagan (I-55) earned their first accolades on a cold Missouri weekend. Kinsers claimed nine of 10 through Mississippi, an Alabama series debut, Kansas, and Eldora where one evening by Stevie Smith (Ingersoll-Rand 19) halted the rampage.

Fargo became the final win of Sammy’s season due to a Martin Memorial mishap that was brutal and bizarre. As he completed his second lap of qualifying, Swindell glanced at the infield scoreboard. Unfortunately, the next qualifier had yet to fire so the push truck was still attached. Sammy slammed that truck with a sickening crack that left him busted from north to south and east to west. He hired brother Jeff for Eldora then grimaced through a second Knoxville Nationals win by Lasoski, who would win no more in 2001. Hillenburg missed Nationals to nurse a concussion while Johnny Herrera broke his shoulder during the Nationals B-main. John missed only two races.

Lasoski erased 63 points in five races that ended with Mark Kinser less than Top 12. Danny left Texas as point leader one weekend before the banquet. In the tightest title fight in series history (until 2019) Lasoski brought his only Series crown to Lexington, MO. The Dude’s crew chief was Jim Carr from Maple Ridge, British Columbia. Carr parked his own driving desire to maintain J.D Byrider Eagles alongside Canadian pal Al Stephen. Their consistent attention to detail netted the first of 20 such trophies by Tony Stewart Motorsports.