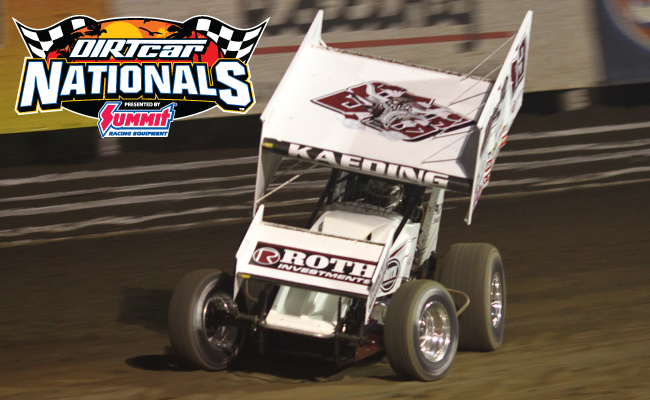 Fan favorite, Tim Kaeding, will return to the series as a touring driver after a stellar season in 2013, when he won nine events in a limited schedule with the Outlaws.

“Hopefully it will be a lot of the same as last year,” said Kaeding, of San Jose, Calif. “Wins came when they came, and if we do the same thing this year, I think it will be a good year for the entire Roth Motorsports team.”

Kaeding believes the team has improved in its weak spots in 2013, namely the larger tracks.

“We worked hard and figured out a few things we did wrong on the half miles, so I think it will be a better package,” Kaeding said.

Sprint car Hall of Famer, Bobby Allen, has resurrected Shark Racing to take son and grandson, Jacob Allen, 19, and Logan Schuchart, 21, to touring status with the World of Outlaws STP Sprint Car Series. The two young drivers plan to compete for the Kevin Gobrecht Rookie of the Year Award Presented by ButlerBuilt.

“If we can get a win or two, or just finish consistently enough that we run good and finish in the top 10 in points I’d be happy with that,” said Schuchart, of Hanover, Pa.

Allen looks forward to competing with the top-tier series.

“If you’re racing sprint cars, you want to race with the World of Outlaws,” he said. “I feel like as this season goes on I’ll get better and better and we will see where it takes me.”

How do they feel about racing each other? It’s not exactly about who wins, says Allen.

“To beat him doesn’t mean anything to me,” Allen said. “It’ll just be fun to learn from each other, and compete with each other, so hopefully we’ll get some close racing action together.”

POINTS UPDATE: Beginning with Friday’s opening night of the World of Outlaws STP Sprint Car Series season at Volusia Speedway Park, A-main winners will earn 152 points, two more than in previous years. The additional two points ensure the winner of the A-main earns the most points at the event, regardless of qualifying bonus points.

SALDANA QUICK: A year ago, Joey Saldana rolled into Volusia Speedway Park for the DIRTcar Nationals presented by Summit Racing Equipment with the Motter Motorsports team still working out the kinks that come with quickly building a team during the off-season. Fast-forward to this past Tuesday night at Volusia and Saldana, the fourth-place finisher in the 2013 World of Outlaws STP Sprint Car Series championship, was the quickest car on the track during the sprint practice session with a time of 13.010 seconds around the half-mile oval.