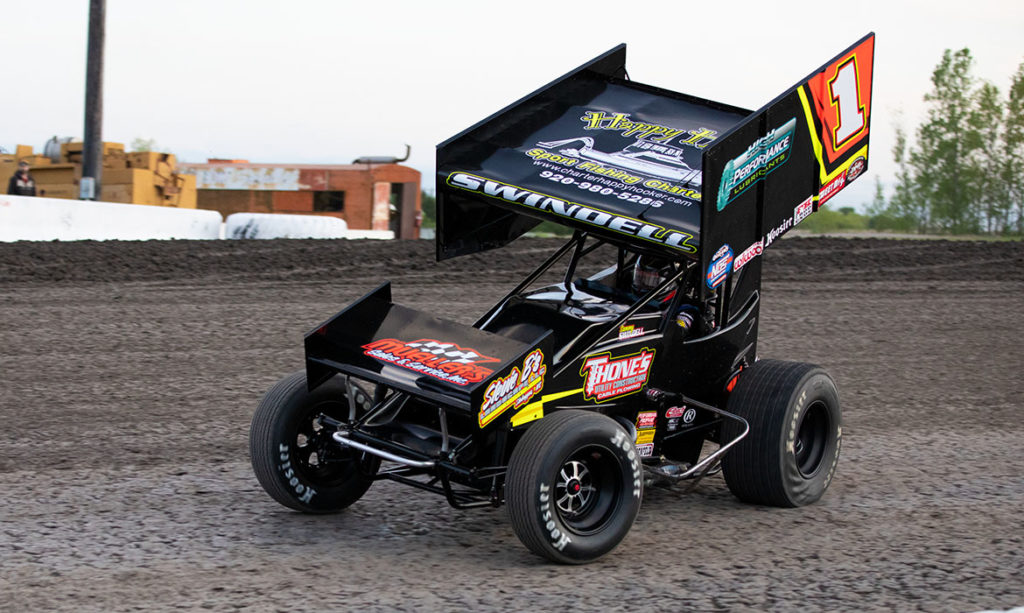 While several race car drivers are retiring in their 40s or 50s, Swindell continues to climb behind the wheel of 900hp Sprint Cars without hesitation.

The Germantown, Tenn. native is an original outlaw. He ran in the World of Outlaws NOS® Energy Drink Sprint Car Series’ inaugural 1978 season, and since then amassed three Series championships, 394 Series wins and has broken several Series records.

He continued his more than 30-year Sprint Car career, racing with the World of Outlaws, April 12, at Devil’s Bowl Speedway in the No. 1 Thone Motorsports car — his ride for 40 to 50 Sprint Car races this year, which include several World of Outlaws races. Next on his schedule is the Midwest triple-header weekend at Lake Ozark Speedway on Friday, April 26, Federated Auto Parts Raceway, on Saturday, April 27 and Jacksonville Speedway on Sunday, April 28.

“It’s just, I love driving Sprint Cars,” Swindell said. “And the 410s are kind of the ultimate deal. We could go run a lot of other little shows, but you got to beat the best to know you’re that close, or that good. I’ve always not shied away from running with the best cars.”

There’s no slowing him down, and his son, Kevin Swindell, knows it.

In 2000, Sammy took a step back from racing to spend more time on Kevin’s career. But that still didn’t stop him from racing; and winning. He won his fifth and final Chili Bowl Midget Nationals win in 2009, and claimed several World of Outlaws victory after that time — his last Series win coming at Eldora Speedway in 2014.

Kevin suffered a spinal injury during the 2015 Knoxville Nationals that ended his racing career. While he supports his father’s racing habits, he does worry about him.

“A part of me wishes he would just quit and not hurt himself or just wear his body out to the point he can’t just relax and enjoy a real retirement,” Kevin Swindell said. “I think until we can find him something that can really consume his time, it’s gonna be hard to get him to slow down.”

Sammy Swindell said people have asked him when he is going to retire. His answer, “I don’t know.”

“You know, it might be one day when I can’t see as good, or I can’t do this, or I’ve got some kind of handicap deal, something that’s keeping me from being competitive or winning races,” Swindell said. “Well then that’s time for me to do something, kind of step back and maybe not do the driving anymore.”

He understands age is not a race he can win, though.

“It’s like, you know, there’s only so many (races) I want to do and can do,” Swindell said. “As far as doing a weekend or a couple of weekends, that’s fine. But trying to do this every day, every day, it’s definitely harder when you get older.”

He said he feels comfortable and capable of running about 50 races a year, compared to the more than 90 race World of Outlaws schedule. Not only does his age play a factor into that, but the budget of the team, too.

When it comes to setting up the cars, age is his greatest advantage. From the inaugural 1978 World of Outlaws season to now, Swindell said there’s only “little things” that are different between the current and old cars. The biggest change, he said, are the shocks.

“There’s so many things you can do (with the shocks),” Swindell said. “Before you just put it on and ran it. You might have 60 in your trailer and you have maybe eight that you like. And we didn’t have dynos to test them. Now, it’s just got so much more technical. Since there’s so much change you can really get yourself dialed in or dialed out.”

For a time, the older cars were faster than the newer ones, Swindell said because of weight and tire rules. However, the current generation cars have gotten back to being as fast, if not faster, then the old ones.

“They seem to keep getting faster and faster,” Swindell said. “You’ve got to be real quick. You’ve got to time everything a lot different than you used to.”

The cars are harder to drive now, too. Your time to make a move from corner to corner has shortened, he said, making it harder to pass.

“Sometimes it’s just hard because the times are so close now,” Swindell said. “A tenth, you can be up front or be from the mid-pack to the back. You have to work harder and have everything exactly right.”

He loves the challenge, though, he said. Running part-time makes it hard to keep up with the car race to race, but Swindell still believes he and his team can be competitive. There’s no slowing him down.

His legacy and passion for the sport is not lost on one of the current youngest World of Outlaws drivers, rookie Carson Macedo.

“It’s pretty incredible to get to race with him,” Macedo said. “He’s definitely a legend of our sport. I think it’s awesome he’s still in good enough shape and strong enough mentally to put himself in that racing position still at his age.”

While Steve Kinser may have been who Macedo looked up to growing up, his respect for Swindell grew with age, learning the staggering accomplishments Swindell has garnered.

“The more I race and the more I realize how physically demanding a lot of it is, being on the World of Outlaws tour for that long, and just he’s definitely accomplished a lot in his life,” Macedo said. “There’s a lot of times I think, in racing, Sammy hasn’t always been the most easy person to get along with. In some instances, some drivers don’t consider him their best friend, but at the end of the day, everybody has respect for him, because of what he’s been able to accomplish and how hard he’s worked to make such a successful career out of Sprint Car racing.”

The atmosphere in the pits are a little different for Sammy now. A lot of the drivers he grew up racing with, even some 10 to 12 years younger than him aren’t racing anymore. At 62-years-old, Steve Kinser retired in 2016. That’s impressive to Swindell’s son.

“I think it’s just truly impressive to think back on what those guys put their bodies through for so many years in a whole different era of medical remedies and what not,” Kevin Swindell said. “And he (Sammy) still can get after it with these guys at his age on a part-time effort.”

And get after it is what he plans to do.

“There’s not too many people in their 60s that have won an Outlaws race,” Sammy Swindell said. “It’s like every time I do, well, that’s a new record. It’s like, now I’m the oldest. Breaking records myself, my own records.”

Don’t miss a second of the action at Lake Ozark Speedway, Federated Auto Parts Raceway or Jacksonville Speedway, get your tickets by going to WorldofOutlaws.com/tix or call 844-DIRT-TIX.