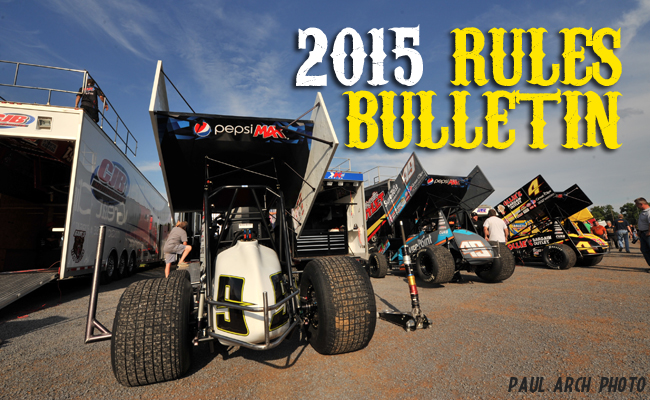 World of Outlaws Rules Changes in 2015

The series makes several updates for the upcoming season

Below are updates for the 2015 World of Outlaws STP Sprint Car Series season. A full 2015 series rulebook will be available in the coming weeks.

A.) Aluminum and/or carbon fiber-type seats will be permitted. All seats must be mounted to the frame as required by the seat and chassis manufacturer. All seats must be installed and used in accordance with the manufacturer’s instructions. Effective February 1, 2014 all cars must be equipped with an approved driver’s seat.

Only the following seats have currently been approved for competition;

A.) 85 (show-up) points will be awarded to all members in good standing, who attempt to qualify a car, but fails to qualify for the feature event in a one-day event or the final day of a multi-day show.

E.) One (1) point will be awarded for the fastest qualifier. This point will only be awarded when the entire field qualifies at the same time.

A. The tether mounting must meet the SFI 55.1 specifications which includes two (2) Vectran® HS V-12, or Dynemma 12 tethers attached to the chassis.

B. Tether system shall include a “king pin to king pin” tether that will attach to the axle clamp/band.

C. The tether cable should be installed using the manufacture’s provided fasteners.

D. Tethers of any type must be installed and used in accordance with the manufacturer’s instructions.

The following tether(s) have been approved for competition;

The approved axle tether’s may be revised from time-to-time with additional approvals and/or other changes to the approved list.

a) Any type shock(s) that were not utilized during or before the 2014 WoO Sprint racing season must be submitted and approved prior to being placed into WoO competition. It is highly recommended that the approval process be completed prior to product production.

V.) Torsion arm stops will be mandatory on both sides of the front torsion bars effective February 1, 2014. The retainer may be of the rod-type with a securing cap or insert with an expanding mandrel and/or any other approved Torsion arm stop design . Torsion arm stops must be installed and used in accordance with the manufacturer’s instructions.

The following torsion bar stops(s) have been approved for competition;

b.) All Star Performance All Star 10730 Retainer

The approved Torsion Arm Stop may be revised from time-to-time with additional approvals and/or other changes to the approved list.

A.) Only the following designated Hoosier Racing Tires will be permitted for competition on all four (4) positions of the racecar at all World of Outlaws STP Sprint Cars Series events.

The designated tire(s) will be available in the following compounds:

N.) Between Qualifying and any Main event p unctured, damaged, sliced and/or out-of-round marked right rear tires may be changed to a suitable right rear used tire of the same size and compound without penalty unless said tire change occurs during a Heat or Dash race. Cars changing to a used tire during a Heat or Dash race will restart the race at the rear of the field that is on the same lap. Replacement tires shall be remarked by the World of Outlaws Sprint Cars Series Officials and the replaced tire shall be confiscated. Should a suitable used tire, as specified above, not be available a harder compound may be used at the discretion of the World of Outlaws Sprint Cars Series Director.

B.) Computer operated and/or controlled parts, such as fuel injection, fuel systems, chassis adjusting systems, etc., will not permitted at any time during any event. The use of any electronic remote and/or wireless equipment capable of adjusting any equipment and/or function on the race car while during any type of racing competition will not be permitted.