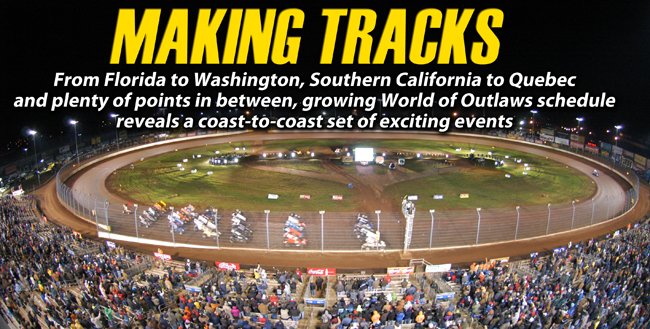 ORLANDO, Fla. – Dec. 2, 2011 – The World of Outlaws Sprint Car Series announced Friday its growing 2012 schedule of events at the Performance Racing Industry (PRI) Trade Show at the Orange County Convention Center as well as on Facebook in an unprecedented move to share the events directly with its passionate fan base.

Featuring a schedule, which will continue to expand in the coming weeks, that runs from February to November, the World of Outlaws will compete in the most prestigious winged Sprint Car events of the year, including the Kings Royal, the Don Martin Memorial Silver Cup, the Ironman 55, the Goodyear Knoxville Nationals, the Gold Cup Race of Champions, the Williams Grove National Open, and the Lowes Food World Finals.

As previously announced, the season begins Feb. 17-18-19 during the UNOH DIRTcar Nationals at Volusia Speedway Park near Daytona Beach, Fla., then heads west to compete during each week of March in Arizona and Nevada as well as in two-time and defending series champion Jason Meyers’ home state of California.

The events in March include the World of Outlaws return to USA Raceway in Tucson, Ariz., and the series return to Perris (Calif.) Auto Speedway for the first time since 2007.

The Outlaws invade the Midwest in April. Among the events are the returns to Sedalia’s Missouri State Fair Speedway after a year absence, Farmer City (Ill.) Raceway for the first time since 2003, and Eagle Raceway for the first time since 2009. Also, the Outlaws will return to one of their favorite bullrings, Tri-State Speedway in Haubstadt, Ind., where promoter Tom Helfrich and his family were named recipients of the Ted Johnson Award at the 2011 banquet.

In May, the series heads east to a couple of historic venues – Eldora Speedway in Rossburg, Ohio, and Williams Grove Speedway in Mechanicsburg, Pa. – before racing for the first of two times in 2012 at Rolling Wheels Raceway in Elbridge, N.Y., and then celebrating Memorial Day Weekend with races at The Dirt Track at Charlotte in Concord, N.C., and Lawrenceburg (Ind.) Speedway.

Summer heats up with 11 events currently scheduled in June, including the Outlaws return to Kokomo (Ind.) Speedway for the first time since Kasey Kahne Racing’s Joey Saldana earned the victory in 2007, and a new earlier event at Clay County Fair Speedway in Spencer, Iowa, where the Outlaws will also compete in September.

July expects to be the busiest month of the season with 14 events already on the schedule, including a Canadian swing of four races in five nights beginning with Quebec tracks Autodrome Granby and Autodrome Drummond and Ontario venues Cornwall Motor Speedway and Ohsweken Speedway, where NASCAR Cup champion Tony Stewart earned his first World of Outlaws victory last season that some speculate helped spark his run to the 2011 Cup crown. Among the July events, which include some of the biggest of the season, is the Brad Doty Classic at Limaland Motorsports Park, winners of 2011 Promoter of the Year honors.

This August marks the 52nd year for the Goodyear Knoxville Nationals, the world’s richest Sprint Car event, where Tony Stewart Racing’s Donny Schatz will be attempting to win for the sixth time and Steve Kinser will be seeking his 13th victory.

The traditional post-Knoxville schedule has a few new twists this season beginning with the Outlaws heading to Junction Motor Speedway in McCool Junction, Neb., first and then up to North Dakota for races at River Cities Speedway in Grand Forks and Nodak Speedway in Minot. The Oil City Cup in Edmonton, Alberta, will lead to the Outlaws returning to Washington for events at Grays Harbor Raceway in Elma, and then to Skagit Speedway in Alger.

The championship race comes into focus in September and October, with a cross-country road race to the Lowes Foods World Finals in Charlotte beginning with events at Cottage Grove (Ore.) Speedway, the Gold Cup Race of Champions going back to a three-day event, and a second consecutive year at Antioch (Calif.) Speedway. Those races lead teams back to the Midwest at Iowa’s Clay County Fair Speedway and Minnesota’s Deer Creek Speedway in Spring Valley. The Outlaws help kick off Eldora’s 4-Crown Nationals Weekend and then head to Lernerville Speedway near Pittsburgh for the Commonwealth Clash, setting the stage for the Williams Grove Speedway National Open, a truly raucous event pitting the Outlaws against the vaunted Pennsylvania Posse for $50,000.

The series will once again take part in October’s Super DIRT Week festivities in Central New York, competing at Rolling Wheels Raceway Park where a standing-room-only crowd in 2011 saw Jason Meyers put a stranglehold on the championship race with his fourth of five consecutive victories down the stretch.

It all leads to the season finale at The Dirt Track at Charlotte in Concord, N.C., for the Lowes Foods World Finals, an event that has quickly become a must-see weekend for dirt racing fans.

As the season grows closer and more events are added to the schedule, make sure to click WorldofOutlaws.com for the latest updates. All events will once again be carried live on the Dirt Radio Network at DIRTVision.com. Several events will also be broadcast at DIRTVision.com with streaming video depending on available high-speed network access at various venues.