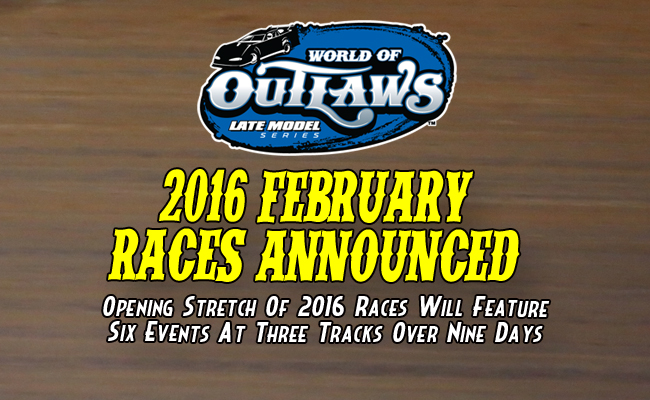 NEW RICHMOND, Wis. – July 30, 2015 – As the World of Outlaws Late Model Series prepares for its richest event of the year during this weekend’s USA Nationals at Cedar Lake Speedway, the national tour is already providing an early look at its 2016 schedule.

Series officials today revealed the first six WoO LMS events of 2016, announcing a new-look February schedule that will feature six events at three tracks in Georgia and Florida over a nine-day stretch. Three supporting dates for DIRTcar Late Models will make for nine consecutive nights of action during the early-season stretch.

The WoO LMS will once again kick off its season with back-to-back trips to Screven Motor Speedway in Sylvania, Ga., and Bubba Raceway Park in Ocala, Fla., but for the first time, the two tracks will share the same weekend. Screven will open the WoO LMS campaign with a pair of events on Fri., Feb. 12 and Sat., Feb. 13 ahead of a visit to Bubba Raceway Park on Sun., Feb. 14.

The WoO LMS will then head to Volusia Speedway Park in Barberville, Fla., to take its traditional place at the end of the DIRTcar Nationals. After three nights of DIRTcar Late Model action at the half-mile oval, Volusia will close out the DIRTcar Nationals with three WoO LMS events Thurs., Feb. 18 through Sat., Feb. 20.

“With our schedule we always look to do what makes the most sense for everyone involved – the tracks, our race teams and the fans,” WoO LMS Series Director Tim Christman said. “With our 2016 February schedule, we’re able to visit all three of our traditional Georgia and Florida tracks while giving our teams an extra week off to prepare for the start of the season and one less week on the road. The best part is we have nine straight nights of exciting racing for race fans.”

More details regarding the 2016 WoO LMS season-opening dates will be made available in the coming months. The complete 2016 WoO LMS schedule will be released at the Performance Racing Industry trade show in December.